S&P 500 quick downswing attempt indeed didn‘t come – fresh highs were confirmed by bonds. Even if just on a daily basis, that‘s where the bias is – long stocks still, but with a wary eye as Treasuries and corporate bonds need to kick in on a more than daily basis. I‘m taking it as that the bullish expectations for today are really high – so much so that better than expected non-farm employment change resulted in a sell the news reaction. So, how does that line up with today‘s FOMC?

Dovish undertones are obviously expected – at least in attempting to sweep the hot inflation under the rug, spinning it somehow else than with the tired transitory horse. Discredited one too. So, how would the taper message be delivered, and could it go as far as $15bn a month asset purchase reduction while avoiding rate hike mentions as much as possible? Even if $15bn is indeed the announced figure, I‘m looking for the Fed to soften it before it can run its course, i.e. before 2H 2022 arrives – the economy isn‘t in such a great shape to take it, and the fresh spending bill (whatever the price tag), needs central bank‘s support too.

Let‘s recall my yesterday‘s words about how that‘s likely to translate into market moves:

(…) Overall, stocks haven‘t made much progress, and are vulnerable to a quick downswing attempt, which probably though wouldn‘t come today as the VIX doesn‘t look to favor it. Wednesday, that could be another matter entirely. Still, there is no imminent change to the stock bull run on the horizon – the focus remains on ongoing Fed accomodations.

Tomorrow‘s Fed taper announcement wouldn‘t change a lot – so much can (and will) happen in the meantime, allowing them to backpedal on the projections, making rate hikes even more of a pipe dream. The Fed isn‘t taking inflation seriously, hiding behind the transitory sophistry, and that‘s one of the key drivers of rates marching up, rising commodities, and surging cryptos. Look for more oil and natgas appreciation while copper goes up again too. Precious metals are still waiting for a catalyst (think dollar weakening when even rising rates won‘t provide much support, and inflation expectations trending up faster than yields) – a paradigm shift in broader recognition of Fed obfuscation and monetary policy being behind the curve.

The Fed turning even more dovish than expected, would light the fireworks – they‘re likely to pay lip service to inflation similarly to Jun, but it won‘t pack the same punch. Inflation expectations haven‘t peaked, and the yield curve is about to steepen again as rates would mostly be moving higher. 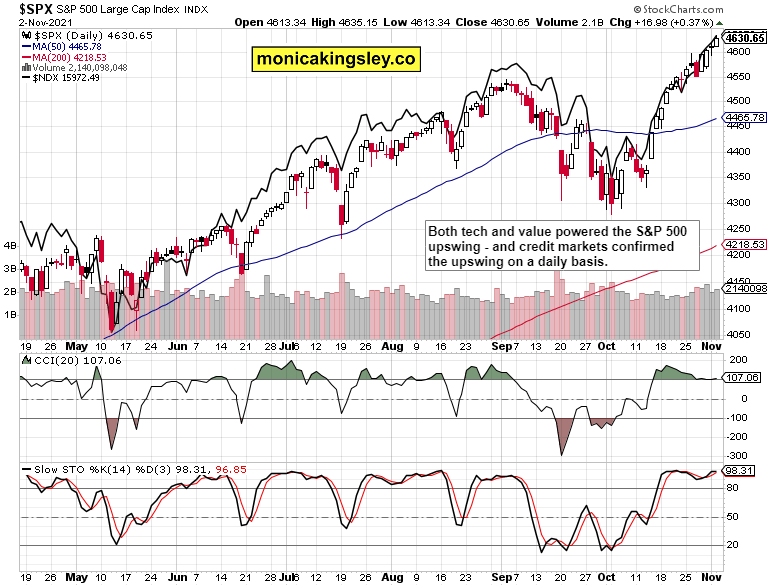 S&P 500 keeps rising, and is setting itself up for a brief disappointment. We aren‘t though making a top with capital t.

Universal risk-on move in the credit market, on volume that didn‘t disappoint, which just confirms the bulls‘ overall technical advantage.

Gold downswing left a lot to be desired – we aren‘t likely staring at a true slide next. I actually look for silver (and the cyclically sensitive commodities such as copper, and also oil) to outperform gold in the wake of the Fed move. 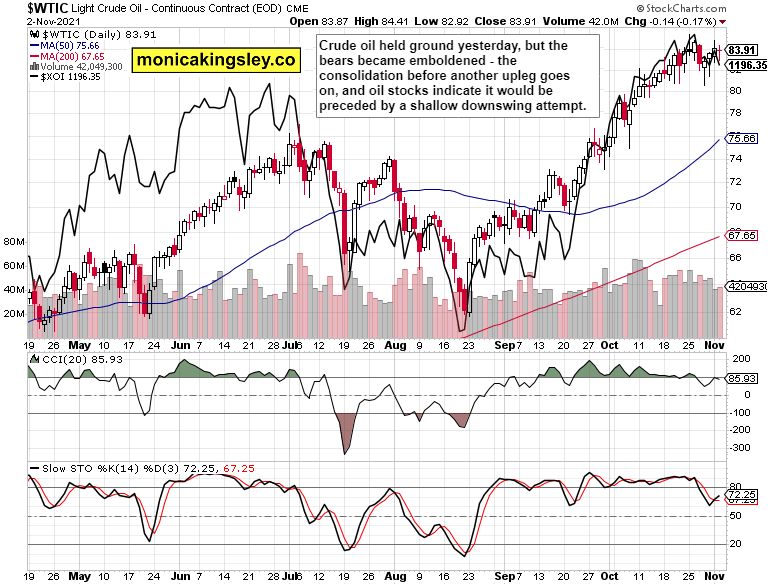 Crude oil didn‘t move much on a closing basis, but the bulls need more time to retake the reins. 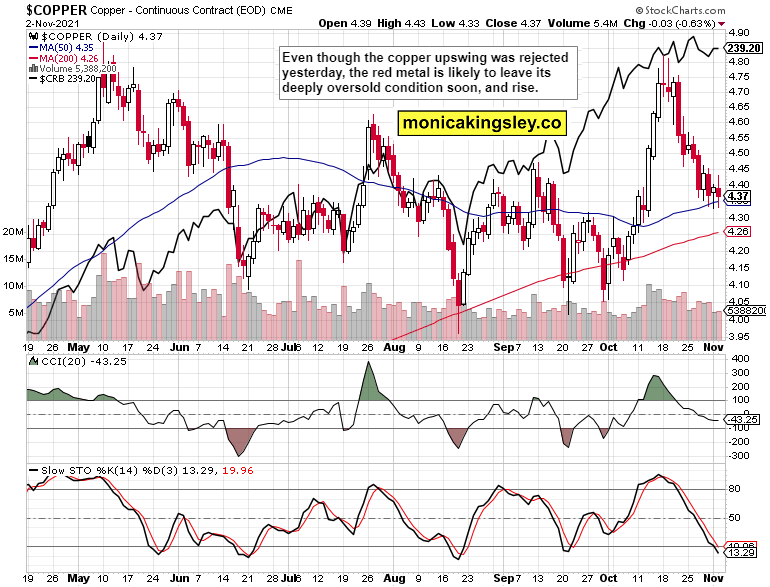 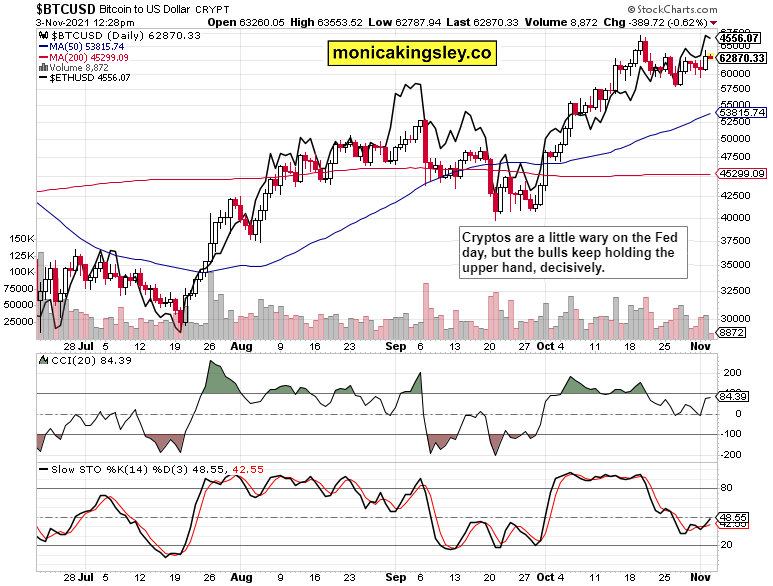 Bitcoin and Ethereum bulls haven‘t yielded, and keep the overall technical advantage. Should prices dip below $58K in BTC without solid buying materializing, now that would make me wary. But the Fed won‘t be hawkish., no.

Potential S&P 500 bear raid is approaching, and the more dovish the Fed would be, the shallower dip in stocks can be expected. Yes, the bulls keep having the upper hand – credit markets have behaved. As mentioned yesterday, that‘s the big picture view – the very initial reaction to taper announcement would likely be reversed higher. Cryptos, oil, copper would react best, with precious metals figuring it out only later – unless the Fed negatively surprises, in which case cryptos would be prone to wilder swings (but not downside reversal in earnest).