The Big Disconnect: Why Listening Matters​

What if we are not going back to anything familiar but we are simply in forward motion?

For many of us, this idea is way too big as it is easier to go back to normal than to explore the edges. And it’s ok. For humans, change is not for everyone. Some of us get seasick and don’t like movement or motion. Some believe we are separate from nature and that we can actually manage change. And some of us flow with change. It’s personal.

Author Pema Chodron shares, “When things are shaky and nothing is working, we might realize that we are on the verge of something.”

Now, imagine for a moment that we had just experienced a major reset where everything we knew came into question (the past) and we were given a gift to observe and listen (the present). Imagine that we learned that “55 percent of workers say that the ability to work from home or have a more flexible schedule is more important to them now than it was before the pandemic. That’s compared to 52 percent of respondents who cited higher pay as being of more importance.” 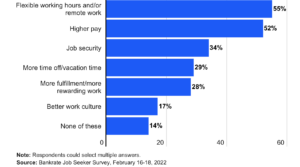 And in this survey where people were asked for their opinion, they shared what they needed. The headlines are screaming: Young Workers Demand Flexible Work. But the bigger question is: Is anyone listening?

Additional surveys are finding that “women embrace flexible working, but economists say it could hinder their careers. Twice as many women than men say they would quit if asked to return to office five days a week.”

Some companies are listening but many are still choosing not to listen as the headlines tell us: Goldman Sachs wants workers back in office 5 days a week—a stampede’ of other companies could follow, experts say. Here is more:

“It comes five weeks after a botched attempt to get Goldman Sachs employees back to the company’s headquarters in New York. When the firm re-opened its office on Feb. 1, after closing for a month due to the spread of the Covid omicron variant, only about half of Goldman’s 10,000 workers showed up to its HQ, Fortune reports.

CEO David Solomon made his distaste for remote work known, even as other top-tier companies–Citigroup, Meta, UBS and Twitter– have embraced flexibility and are letting employees work from home on a regular basis. During a financial conference last year, Solomon called remote work an “aberration” that he wanted to correct “as quickly as possible. Now that one high-profile CEO–Solomon–has declared his intentions for a full return to office, however, more companies could be inspired to follow suit.

People working from home have said it’s helped them maintain a better work-life balance, manage childcare responsibilities and be more productive, among other benefits. But such praises might not be enough to prevent companies from pushing a return to the office, Peter Cappelli, a professor at the University of Pennsylvania’s Wharton School of Business, notes: “Just because employees want something, doesn’t always mean they get it.”

As a former market researcher and pollster, I am always surprised that we conduct surveys and don’t listen to what people have to say. It’s like building employee engagement strategies after getting low scores on a survey and not seeing the survey itself as part of the overall engagement. What will be the cost of having 55% of the employee base disgruntled with having to return to the office?

You pay now, or you pay later. There is always a bigger cost that can be managed when we choose to truly listen.

The truth of the matter is that some people love working from a physical office for many reasons and some never want to work in an office again. Some people love routines, while others love to get a rush from being spontaneous. We can only know what we are each made of through deep listening of ourselves and each other. And isn’t it time to adopt flexibility?

Now comes the question of walking our talk and this pertains to each of us with the conscious choices we make. There is no one to blame when we feel forced to do something we don’t agree with. Sure, it can be unjust but living our truth is why we are here. We get abundant opportunities to practice.

Imagine if our success stories were ones where organizations were lucky enough to have us work with them and not the other way around? That we were the ones who chose what worked for us, and what didn’t?

Listening is the foundation of human communication. And we can improve it dramatically by simply caring 1) about our health and 2) each other. It’s not rocket science.

The question right now is not about whether we return to the office or not; it’s about who controls our lives and our willingness to listen to what is calling us. We will see more and more people making different choices over the next decade and it should not come as a surprise.  Younger people are choosing a simpler life and many older people are un-retiring.

To listen, we make a conscious effort not to just hear what is being said but to fully take it in, digest it and understand. And some times the best answer is another question. But that is what these times of Great Questioning are calling us to start reflecting on what we want and need most? And, then, make conscious choices that matter.

Related: Who Believed in The Power Rangers?​