Everyone is familiar with the now-famous Elon email asking his employees to physically come back to the office and the reactions to it are many and very interesting.

While most people are in shock and rightfully rolled their eyes, there are some defending him. The main argument is that he can do whatever he chooses as he is the owner of the place and what he says, for whatever reasons - goes. While this is very true, it doesn't mean it makes his stance right or ethical.

Obviously, Tesla employees like anyone else, have a choice to simply leave if that doesn’t suit their lifestyle and many will. In fact, there’s a bevvy of reactions asking them to come on over with the most hilarious coming from AWS where Zafar Choudry said “If the emperor of Mars doesn’t want you, I’ll be happy to bring you over”.

Aside from how taking this stance publicly, is in my opinion, irresponsible as it validates the drones of command&control execs that are still too fearful to let people truly choose, it is also irrational and unbecoming of someone we have collectively decided to call a visionary. He is not only building HumanDebt™in Tesla but elsewhere that listens too.

The POC of “Look, we can work from our homes and be as if not more productive” that Covid inadvertently gave us is precarious, it is in a direct and constant fight with the command and control set point of old-style management. It goes against the nature of the micro-managers and the small thinkers and there are more of them than not. We can’t allow rhetoric that could have easily been written on a whim or after a couple of pints or edibles to set us all back so we must ignore it.

In my view, the worst thing about it is the complete and utter disregard for the lives of the Tesla employees and how it sends a clear “you are not truly valuable to me so off you go to AWS if you liked” message. Nothing would make me feel more unimportant as an employee than having my leader saying he doesn’t care about my wellbeing and that, he’s well aware this position will possibly push me into leaving but he’s fine with that.

It’s arrogant, tone-deaf, misguided and potentially bankrupt. There is no other way to interpret it. Even the title of it “To be super clear” - what does that say? 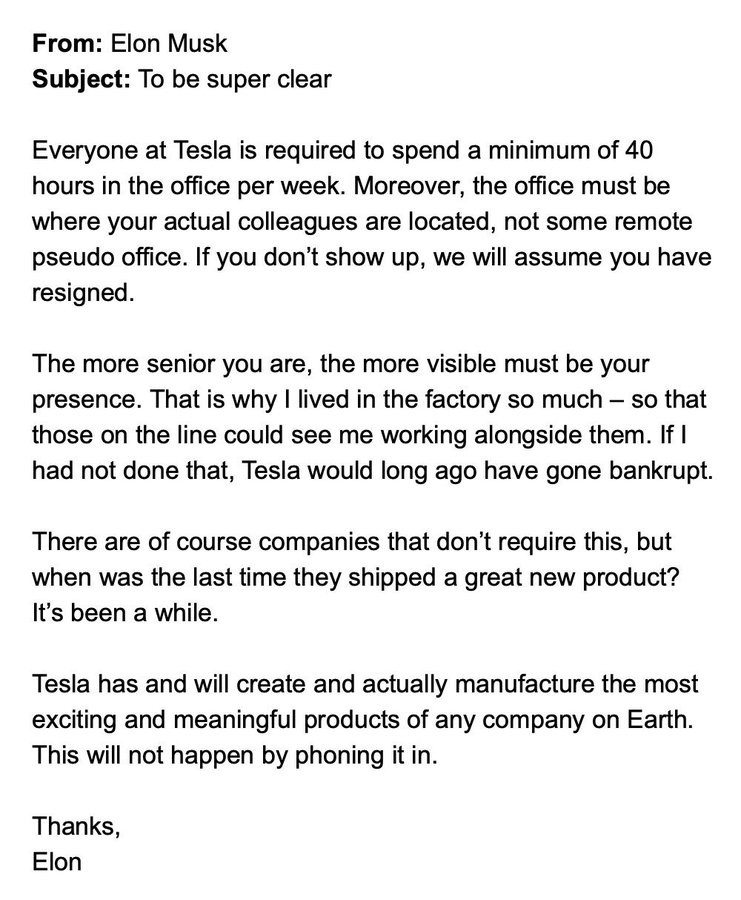 Then he claims that if he hadn’t been visible on the factory floor at all times then they would have long ago gone bankrupt. That’s sad for Tesla really if it needs Elon’s actual image to keep people working. Perhaps he could have some giant posters of himself commissioned so he ensures people are productive? There’s a free tip.

"The more senior you are the more visible must be your presence" - is incredibly deluded, small-minded and really quite sad.

He goes on to say “There are of course companies that don’t require this, but when was the last time they shipped a great new product? It’s been a while”. Which is insane. No other company produced anything else of value and that’s because their people were not physically together?!? If nothing else, consider the amazing work pharma has put in to create the Covid vaccines - guess what - the vast majority of them were working remotely.

Has he not been paying attention? Every study out there shows that people were beyond productive while WFH, there’s zero substantiation to his stance.

I put it to all of us that perhaps Elon sent this purely for the value of the shock, for the fun of being in the public controversy but he will undoubtedly lose employees en masse not for the demand necessarily, but the careless and devaluing tone so no, they won’t be making “the most exciting and meaningful products of any company on Earth”.

This will end up costing him precisely that vision and while he may retract, backtrack or simply choose from a limited pool of professionals that don’t mind the physicality and the lack of respect, 20-30 years down the line when history looks back it will see this moment of temporary insanity as one of the reasons Tesla never reached its potential. What about you, can you afford to joke around?

Just because he’s Elon it doesn’t make him intangibly right and on this one, he is so wrong it will cost him. Unfortunately, it will cost others too. I for one, after this, want none of the “most exciting and meaningful products on Earth” he’s peddling, I’d rather buy the same vehicle from companies that let their best value feel appreciated and cared for so they’re at their most performant.