What Could Force the Fed to Pivot on Rate Hikes?

Increasing prices, higher cost of money (rising interest rates) and a likely forced economic slowdown are difficult to endure; however, the markets remain convinced that the Federal Open Market Committee (FOMC) will likely railroad the U.S. economy into a recession. For investors, as inflation runs hot and corporate profits slow, valuations typically suffer. Looking ahead, as investors try to pinpoint the next reversal in policy (a pivot back to easing), we offer our thoughts on what we think could cause the Fed to reverse course from today’s radically tightening monetary policy.

But first, let’s look back at where we came from….

The Fed embarked on a record-setting period of ultra-easy monetary policy in response to deflationary pressures that manifested during the Global Financial Crises from 2008–2009 by taking interest rates to zero for an extended period and monetizing debt by injecting currency into the economy through asset purchases (known as “quantitative easing”). These so-called “emergency powers” were copied by other developed market central banks around the globe who, in fact, took interest rates to negative levels for years. (We’d note here that prior to these “emergency powers” being created, nobody anywhere — except for possibly Japan — knew of their existence. There were never any classes taught in universities surrounding quantitative easing or negative interest rates, that can be recalled. Monetization of debt is not a new phenomenon for it has been a questionable policy used for centuries by nations that were essentially insolvent and needed a way to forcibly restructure their debts and/or currencies. The strategy didn’t typically end well for those countries that tried it. However, the use of negative interest rates was a new strategy that seemingly had no place in financial history and was a new tactic. For all of global central banks’ actions, they ended up having a relatively small effect on global inflation levels but did significantly alter the course of risk-taking in other asset markets.)

All of these actions to counter deflationary pressures came to an abrupt halt when the COVID-19 pandemic hit. Both fiscal and monetary policies were taken to an extreme level with trillions of dollars of liquidity almost instantaneously pumped into the global economy to help counteract the financial impact of the virus. The one chart that I believe will live forever in the new textbooks is shown below and highlights the gargantuan jump in the monetary supply during the early days of the pandemic. The Fed and Congress — through a number of methods — managed to increase the money supply from roughly $4 trillion in February 2020 to $16 trillion by May 2020, an astounding $12 trillion increase in a period of around 3–4 months. This increase dwarfs anything seen since M1 has been tracked (M1 is the money supply that is composed of currency, demand deposits, other liquid deposits — which includes savings deposits. M1 includes the most liquid portions of the money supply because it contains currency and assets that either are or can be quickly converted to cash.). Contributing to this massive rise in currency printing was the massive fiscal spending done by Congress that was unprecedented in size and scope. What happened next should not be a surprise to anyone. Inflation returned with a vengeance not seen since the early 1980s. 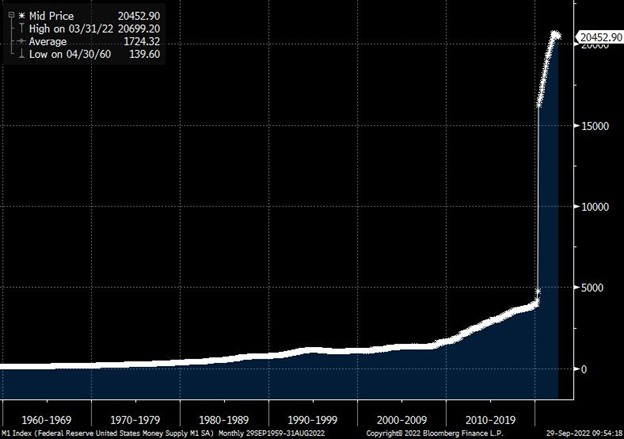 Universities teach that inflation is a phenomenon of monetary policy wherein it is the consequence of too many dollars (or other units of currency) chasing too few goods and services. Inflation results in a weakening of the purchasing power of currency and diminishes the standard of living of a population that is subjected to it and is an insidious devaluation of the wealth of an economy. Only after the Fed determined that inflation was here to stay — and not “transitory” — and was much bigger and more serious than they had anticipated did the Fed radically reverse U.S. monetary policy. In fact, the record-setting pace and size of the tightening measures indicates that the Fed is willing to subject the economy to a recession to slow demand as excess currency is drained from the economy.

Historically, the Fed will embark upon a direction of monetary policy until it reaches a point that it feels it has achieved its goals or, more commonly, breaks something in the economy.

We saw the Fed reverse course from their stated expectations early this year of “transitory” inflation and interest rates that would be “lower for longer,” to increasing interest rates by large amounts on a very fast pace. This indicates to us that the Fed will most likely overshoot and tighten policy well past where it should to support a soft landing. It is not necessarily the size of the rate increases that are so troublesome but the speed at which they are applied. Financial markets do not pivot well when the ground underneath moves quickly, and the Fed is doing just that. We anticipate they will likely break something before the lagging effects of their actions manifest and they are comfortable that they have achieved their goal of slowing inflation.

We are beginning to see “breakage” globally even at this stage of the cycle. Other central banks, including both Japan and England’s, have had to intervene in their sovereign and currency markets because the size and speed of Fed tightening has broken the order in markets. We feel that there is a distinct possibility that these market disruptions could cause a contagion that may cause our Federal Reserve to pivot, or at least pause or slow, their pursuit of higher rates. In other words, we think that seeing the gilt market in England or the yen market in Japan warn of problems to come will likely cause this pivot. We understand that the Fed wants to slay inflation quickly, but markets don’t generally react well to aggressive moves. The Fed has only a few tools to induce a demand slowdown and since they cannot increase the supply of goods and services, they are using interest rates as the tool to act as a forward brake on economic activity. Yet, the data they base their success on is overwhelmingly backward looking, which is akin to driving faster and faster using the rearview mirror as a vantage point.

Market corrections during Fed tightening cycles have not been fun. We are in the camp that this bear market will end fairly soon, either late this year or early next. For what it is worth, we think a recession is all but certain given the inverted bond yield curve. We don’t think it matters whether we have a recession or a “soft landing” since an economic landing is never soft and almost always causes damage. Whatever the downside left in the asset markets, we don’t see it as being soft or pleasant.

Remember, markets typically bottom well before a recession is over and begin to move higher when the pivot of monetary policy is in focus to the market, not necessarily the media. Specifically, the bond market, which is smartly inverted at this point, typically moves toward a positive slope long before a recession is over. See graph below. We think the market bottom is close - much closer than the economy’s bottom – and our work suggests that although market bottoms are sharp and will likely overshoot, they are within sight. 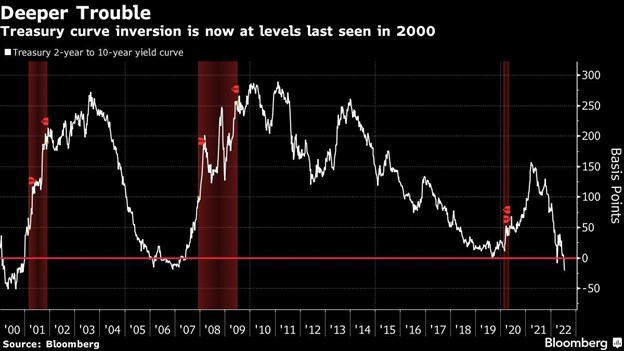 Investors, as well as experienced financial professionals, are understandably jittery and pessimistic at this point. Massive pessimism and fear also mark market bottoms. We cannot pick the bottom of the markets, but we can invest around the bottom so that we establish a favorable basis for re-entry. Bank of America produces a contrarian indicator that has shown maximum investor bearishness for a month, which historically indicates as a screaming buy. See chart below. 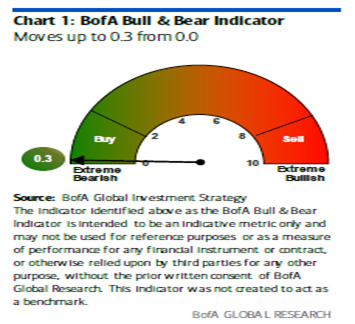 The theory of dollar-cost averaging is useful as investors move into the markets over the next few months. We look to invest in higher-quality companies that can stand the economic storm but can also grow into a recovery. We also suggest that if we are correct in our summation of the Fed pivot, it is likely time to extend bond duration a bit while keeping quality high. We like high-quality corporates, municipals and Treasuries.

We conclude simply by noting that the cardinal rule for investors is to never fight the Fed or any central bank. They have unlimited power and tools to achieve their mandates. We also point out that the Fed will likely move resolutely until they break something, which we believe they are close to doing (again). Valuations have come down in this bear market and may have a bit further to go, but for investors with a three-to-five-year time horizon, this appears to be a good entry point to begin to average in.

Related: 6 Tech Practices That Can Save Your Business