Many of the highest earners in the U.S., including Elon Musk, Jeff Bezos, Larry Ellison and others, have created millions of new jobs, minted hundreds of thousands of new millionaires and literally improved life on earth.

But never mind all that. They’ve made lots of money, so they’re bad by default.

That’s the attitude, at least, of some progressive lawmakers like Elizabeth Warren and Alexandria Ocasio-Cortex (AOC), who famously wore a dress to the Met Gala with “Tax the Rich” emblazoned on it. Slamming billionaires and “the 1%” is now haute couture.

The latest iteration of this type of thinking is President Joe Biden’s proposed “Billionaire Minimum Income Tax,” which is a misnomer since it would apply to households worth $100 million and above. The proposal is likely dead on arrival as it doesn’t have the votes in Congress, but in its present form, it would levy a 20% minimum tax on all income, including not just realized capital gains but unrealized capital gains.

This is a very big deal. Not to insult anyone’s intelligence, but unrealized capital gains are those you’ve made on an asset you haven’t sold yet. They only exist on paper. The asset doesn’t have to be an investment in stocks or bonds or Bitcoin. It could be some property you own, or the house you live in.

Houses Are Subject To Capital Gains Tax Just Like Stocks

Let’s say you bought a house at $500,000 a decade ago, and now it’s valued at $2 million. Under Biden’s plan, you would be asked to pay Uncle Sam 20% on the gains—even if you had no intentions of selling your house.

Now imagine that the housing market crashes and the value of your home plunges back down to $500,000. Do you think the IRS would refund the taxes they already collected from you?

Some readers might point out that Biden’s plan only targets ultra high-net-worth individuals (UHNWIs). The truth is it doesn’t take as much as you think to be in the top 1%. According to SmartAsset’s analysis of IRS and Bureau of Labor Statistics (BLS) data, a U.S. family need only make $597,815 to be considered a member of the top 1% nationwide.

Stock Market At Risk, Along With 401(K)S And Other Retirement Plans

Let’s try to predict the unintended consequences of a tax on unrealized capital gains by focusing on the very highest UHNWIs—the Elon Musks and Mark Zuckerbergs.

Much of their wealth is tied up in the shares they own of the companies they run or helped found, and in many cases, these shares have appreciated greatly in value over time. Again, under Biden’s plan, they would be required to pay a minimum 20% “income” tax on this appreciation.

Below are one economist’s estimates of what the top 10 wealthiest Americans would owe on their unrealized capital gains alone. In total, $215 billion could be collected over nine years, with Musk paying the most at $50 billion. 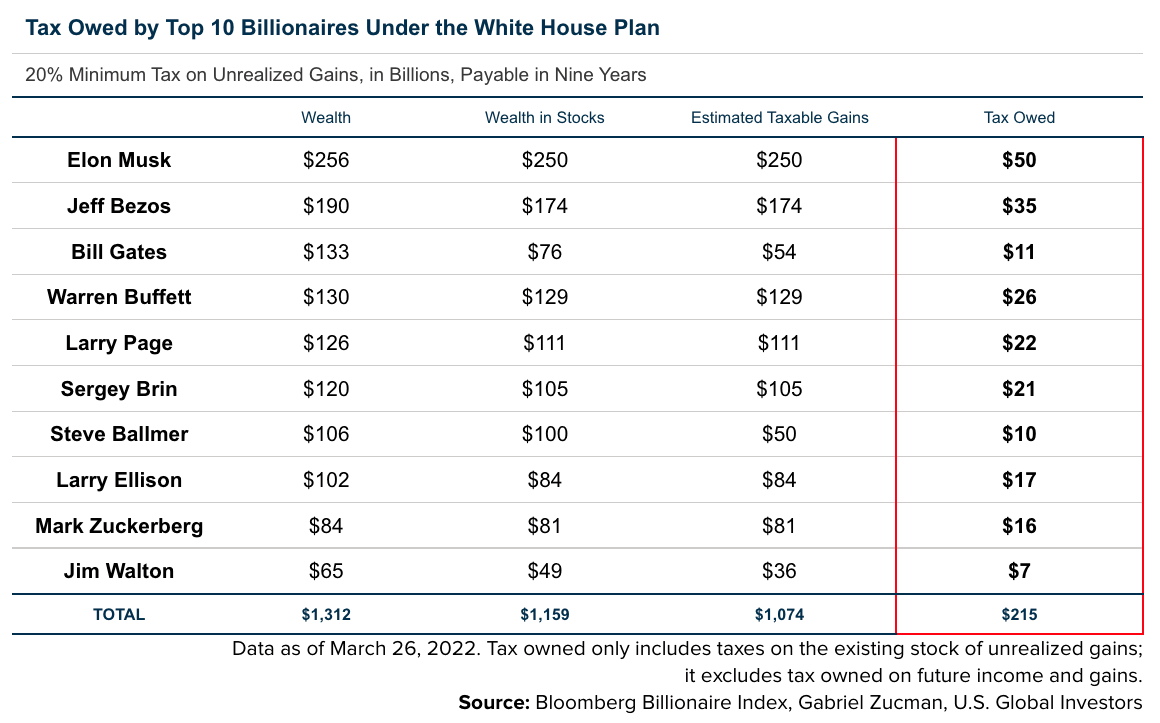 But how would the Tesla chief cover his tax obligation? Selling shares, of course. Lots and lots of shares.

If you recall, Musk sold about $16 billion worth of Tesla stock at the end of last year after he polled his nearly 80 million Twitter followers if he should do so. The market didn’t appear to like this. Between November 8 and December 28, when Musk was selling, Tesla stock tanked 11%. Over the same period, the S&P 500 rose 2%.

Remember, that was “only” $16 billion. What do you think would happen if he had to sell $50 billion worth of Tesla stock?

You can see how this could be a huge risk to everyday investors. Tesla, Amazon, Microsoft and other big-name companies represent a significant percentage of many Americans’ 401(k)s and retirement funds, and these could take a huge hit if high-earning founders and executives had to dump their shares.

Many critics such as Elizabeth Warren and AOC often say that billionaires don’t pay their “fair share.” On the contrary, billionaires are subject to a higher personal income tax rate than other taxpayers, and they’re responsible for paying a vast majority of total income tax revenues.

(By the way, 2018 was the first year under President Donald Trump’s Tax Cuts and Jobs Act, which was initially criticized for favoring higher earners. In reality, those earners ended up paying a greater percentage of total U.S. income tax revenues than ever before.)

And then there are tax rates. The top 1% paid an average individual rate of 25.4%, which is more than seven times the rate the bottom 50% paid, according to the Tax Foundation.

None of this is to disparage anyone. These are simply facts.

I believe Biden’s tax scheme is just the latest in a long list of policies and legislation that are driven by envy. If enacted, it would serve as a tax on success and may even discourage investment.