The Investing Map Has Undergone a Regime Change

Over the past two years the markets have undergone a seminal change. This change, as I will describe it, could change the way investors allocate capital over the next cycle. We are talking about the global economy shifting from a disinflationary/deflationary tilt to a powerful inflationary burst. Investing in an inflationary world is juxtaposed to investing in the world we just left. Inflation is a very powerful force that becomes ingrained in the way we think about and handle our investing and spending our money. The Fed says they can vanquish it. What I discuss here is that the path to stable prices is neither easy nor quick. We have been investing with the wind at our backs for over 40 years. Now the wind is in our face and returns will likely be mainly from Alpha rather than Beta exposure.

The forces that led to this spate of wage and price inflation began during the Global Financial Crises of 2008. At that time, you may recall that the mortgage market bubble burst which laid waste to bank portfolios that held the rancid mortgage paper. The problem was global in scope and the center of risk was the financial system that held these rotten investments on their balance sheets. Every mortgage investment seemed to bear the highest credit rating of triple A from trusted ratings establishments. The ugly truth was that there was little to no credit analysis or underwriting that backed these ratings¾only financial fraud and fabrication of quality. The global banking institution was days from collapse. Banks had to be recapitalized. Swift and sweeping regulatory reforms were adopted.

The fallout from this credit bust was a deflationary wave that threatened to push the country into a depression. We called it the “Great Recession” but there was nothing great about it. Global central banks took rates to 0%. The U.S. Federal Reserve created a number of emergency monetary efforts to try to stabilize financial markets. One of these was the advent of asset purchases. In order to inject liquidity reserves into the economy and tamp down long-term interest rates, the Fed began a program to make systematic purchases of U.S. Treasury debt and mortgages. The results of this effort seemed to work as the Fed grew their balance sheet by trillions printing money and buying debt. They sought to stave off price deflation — which is the worst of any potential outcomes as it tends to destroy consumption and makes debt more expensive to retire. For a levered country like the U.S., that was a big concern. In short, the Fed created a target of 2% inflation and vowed to do everything possible to make that happen and pursued a path to create inflation believing they could easily control it.

Fast forward to 2020. The Fed had been targeting inflation for 12 years by employing every measure of monetary easing imagined. They had very little luck. Interest rates set all-time lows. Every time the Fed tried to reverse course and normalize monetary policy, the economy faded like a cheap t-shirt. Central banks around the world joined the Fed in purchasing debt creating the most unnatural environment of negative interest rates. The global monetization of sovereign debt grew well into the trillions while the amount of global negative-yielding debt easily grew into the trillions as well.

Then came COVID-19. This little virus would serve to change humanity for the suffering and death it produced. However, the ensuing government reaction to the pandemic produced the greatest creation and direct transfer of currency in history. Trillions of dollars were either borrowed to fund massive fiscal stimulus or created on the balance sheets of central banks to flood markets with even more asset purchases. M1 — the measure of available currency — went from $5 trillion to $16 trillion in a month. This was many times larger than the response to the Global Financial Crises.

Consumers suddenly had money and they wanted to spend it. They wanted out of the virus-infected inner cities and out from under government shutdowns. In short, by juicing our monetary supply we created demand at the same time we were experiencing supply disruptions caused by the same virus. Today, we can finally look back at what happened and understand the sharp rise in prices. Many have quipped that this pricing pressure is transitory, but history tells us a different story not understood or experienced by the majority of people: how difficult and painful it is to defeat this level of inflation.

The rulebook for investing during inflationary times is very different than investing during times of price stability. The Fed knows they should reverse course and raise rates to significantly tighten monetary policy. They know it could take time and (according to former Fed Chair Volker) likely a recession or two. The problem is that they have a set of blunt tools to work with and I fear they lack the necessary resolve to put the economy into a contraction.

Some things are clear to me:

The dominance of growth investing over value has likely come to an end as well. Inflation destroys the purchasing power of currency and raises input costs for manufacturers, causing prices to rise and profit margins to be squeezed, while making goods and services less affordable.

Inflation, along with its “groupie” higher interest rates, typically causes valuation of high duration assets to move lower. This is because higher interest rates diminish the terminal value of an asset as the “riskless” rate of return rises. As can be seen in the historic chart below, during times of elevated inflation the average price/earnings ratio drops. The average returns of equities drop as well. There is a sweet spot for equities and inflation around the 2% area, but we are far north of that now. On top of that, we have flattening yield curves which indicate a slowing of growth in our economy. This means that equity markets will have to readjust valuations to higher inflation and decelerating earning growth. This adjustment will likely not be pleasant for U.S. markets. 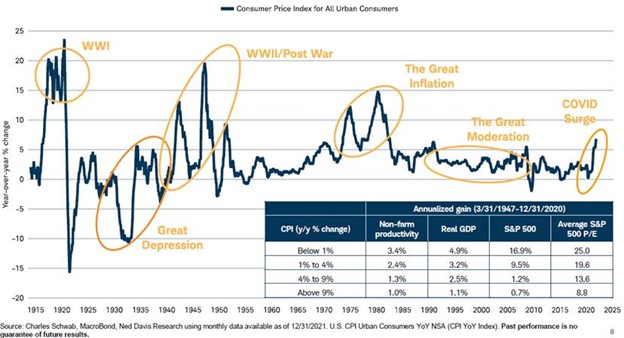 Yes, the regime has clearly changed, so we believe investors should change as well. In early 2020 we made a huge call on commodities. We called it a “generational” opportunity. We made the call because of three observations.

First, because economic demand for commodities had diminished and prices followed, there was precious little investing going into finding new sources of depleting stocks of commodities. The following chart from Goldman Sachs was published in my article in January of 2020 showing that the ratio of commodity prices to the S&P was at a cycle low. 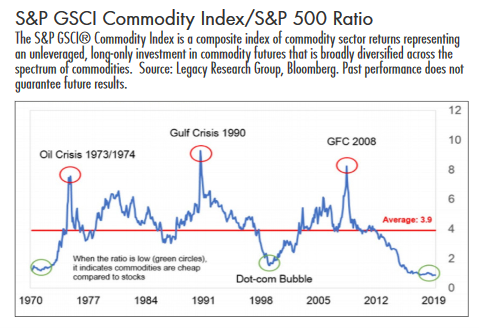 As we can surmise, commodities have bounced back but are still likely in the early innings of the secular move. Social pressure to abstain from using fossil fuels cut off the energy industry from capital. 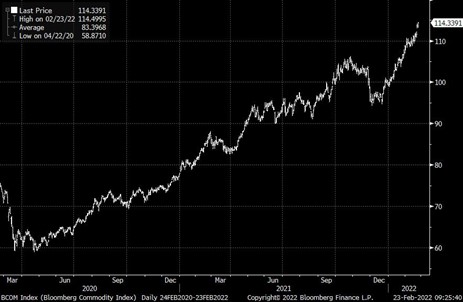 Second, record monetary stimulus has been on steroids for the past 14 years since the end of the global financial crises. The Fed had been frustrated trying to defeat deflationary pressures. COVID-19 and shutdowns pushed both central banks and governments to flood markets with reserves.

Finally, the dollar will likely weaken as it has done in past tightening cycles when actual rate increases happen making imports of materials more expensive over time.

The key to investing in any asset class is to understand the value of what you are buying. We know that valuations will rise if the profits of a company can rise faster than its costs. We are looking for companies that can increase their cash return to investors. Value companies generally are the higher dividend payers. They have had a rough go of it lately but rising free cash flow pointed back to investors in the form of dividends or buybacks will likely perform better in an inflationary environment.

Inflation causes input costs to rise. The winners are those companies that can pass along their rising input costs successfully to customers without losing sales volume. This is tricky. However, there are certain industry classes that generally benefit investors including investments in companies that mine, own, grow or harvest real assets. Real assets are those you can touch and include everything from oil to agricultural crops to timber to iron ore and real estate. Traditionally, the prices of real assets rise with inflation and produce higher profits as time moves forward. Financial companies benefit from inflation and higher interest rates. Healthcare and consumer durables normally benefit to a lesser degree. We updated our call in December 2020 noting that the trend was moving forward. We believe this trend in real assets is a multi-year trend as we believe that inflation will be a multi-year trend. This is a secular trend that won’t likely be reversed by a few quarter point rate hikes.

So, where do you find these types of companies? We suggest looking to emerging markets. Why there? The answer is that many emerging market countries are tied to the real assets that they produce. So, for example: Canada’s gross domestic product (GDP) is made up in a large part by agriculture, mining and energy (green or fossil); Chile’s economy is led by copper; Australia by iron ore and precious metals; Russia’s by oil and minerals. The list goes on. These emerging markets are diverging from U.S. equity markets. The trend is in its infancy, and we believe begs to be considered. Inflation has favored these markets. We think an over allocation to emerging markets could produce out-sized returns in the new regime.