We have been saying that due to the varied and complex economic and market systems, that traditional analysis requires a more nuanced or artistic view. A combination of schoolyard and classroom blended to make sense of the mixed signals that the markets and economic prints are providing. As such, the consternation of the bond markets decline in rates at the same time inflation and GDP prints are elevated, strains the logic of the current situation and requires assumptions for the immediate moves that need to come to reconcile the dichotomy. What if, however, the feeling of the “inconceivable” moment reveals the assumptions the market is making and further details what a moderate outcome could mean? Ultimately, the market prices in forward scenarios and that is where we will begin.

To detail the consternation, let’s look at the 50-year history of the three areas that are the primordial tenets of past and future expectations: GDP, Fed Funds Rates, and Inflation. 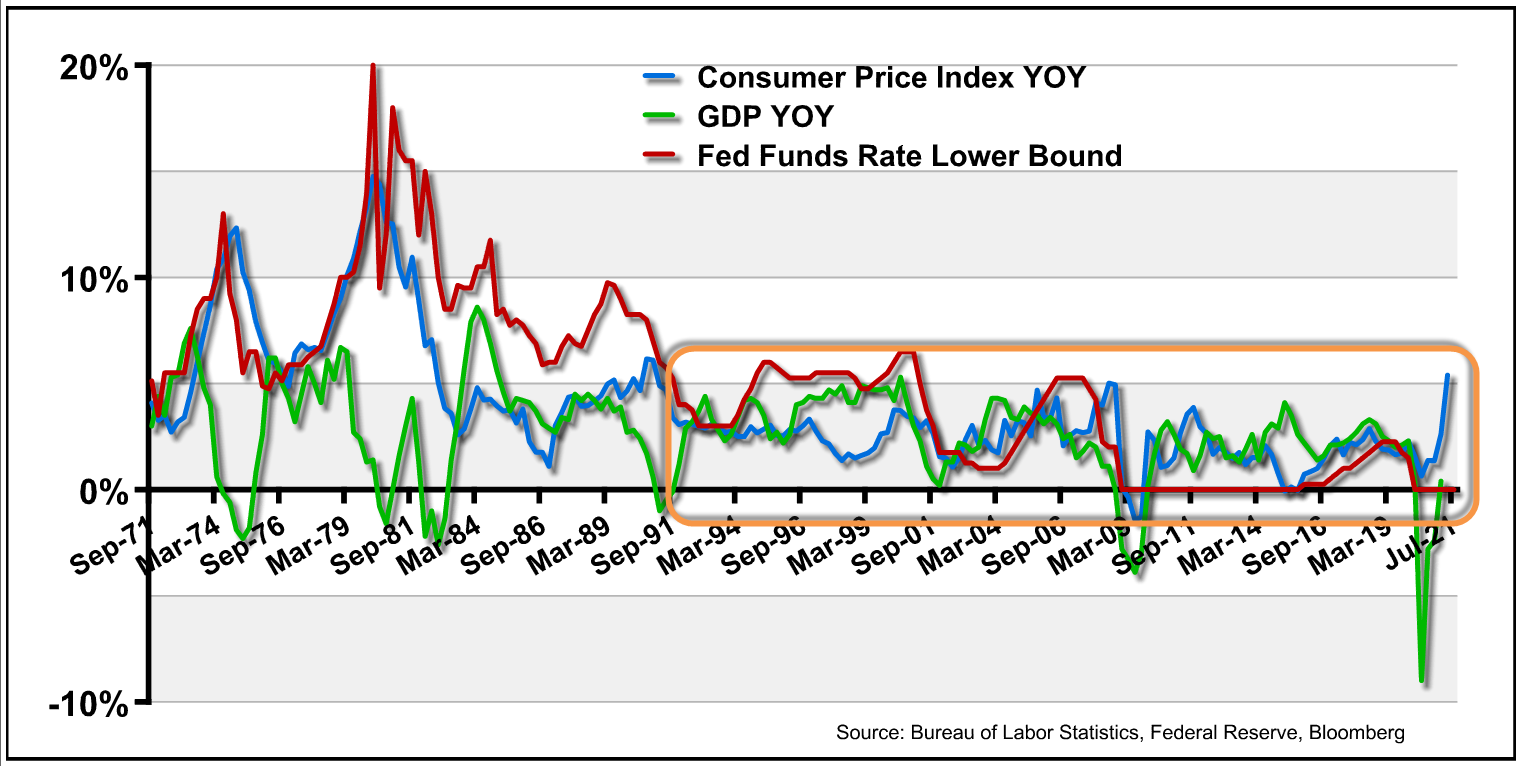 In the last three decades all three areas have been in a historically tight range…the perfect environment for the Federal Reserve to maintain its policies. As such, the last thirty years saw three economic cycles (expansions and recessions) which are historically very long compared to history. Side note, though technically not out of the 2020 recession, most experts think June 2021 or earlier would be the ending date. Using June 2021, the recession ending date in data below.

Some of the key contributors of the nearly 50% increase in expansions since 1945 were interest rate declines, disinflationary pressures, technology improvements and globalization. What we are witnessing now relative to past recoveries is elevated inflation in all four layers: asset inflation, input inflation, wage inflation and pass through. Some areas are stronger than others and some are cyclical relative to anomalistic.

The divergence we are seeing has caused investors to make an almost binary assumption about what happens next: is inflation transitory or is it more permanent? To see historical divergences one must go back to 1975 and 1980 which require a very broad paint brush to draw parallels as hyperinflation began years before, unionization was nearly 35% (which allows much faster pass through of higher inflation to wages to the detriment of the corporate profit focus as well as increased economic slack) and a much more protectionist view of the world in investments and corporate/country diversification.

Would this environment replicate itself perfectly or perhaps have some remnant of that period? Let’s take just a moderate view and say remnant which would include a base case of slightly elevated inflation as well as economic growth. Expectations from the Federal Reserve is running at 7% GDP growth in 2021. Reviewing expectations for next year from a broad base of economists and institutions puts a more moderate 3.9% for next year…though this has increased by nearly 0.6% over the last few months. If accurate, the growth next year is 1.6% higher than the average over the last 30 years.

With elevated growth expected over the next 18 months and elevated inflation expectations, where does this leave us with interest rates?

Glad you asked, look at the real rates where we measure the Fed Funds Rate minus the CPI (Consumer Price Index) year-over-year (YOY) rate. Hint: it does not reflect a normal condition when looking back 50 years. 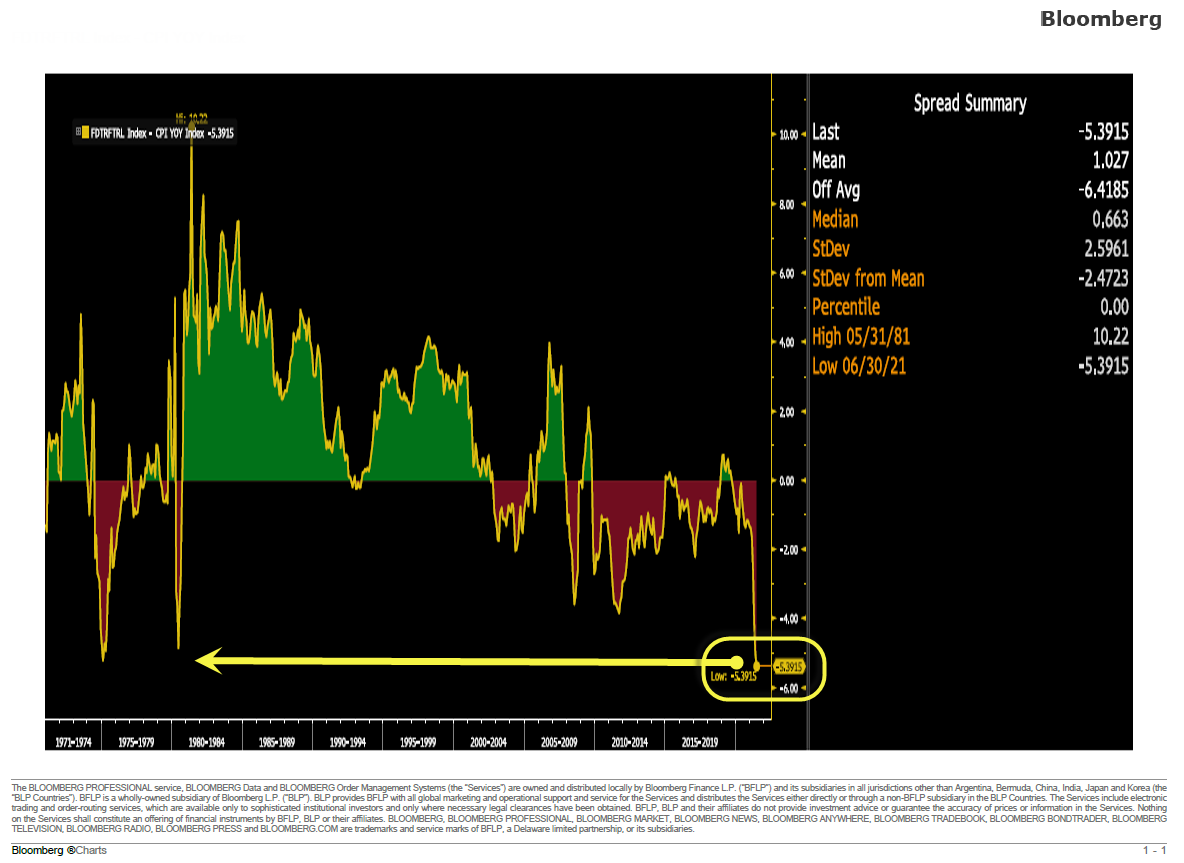 This reveals that the Federal Reserve and the bond market are banking on the inflationary pressures being transitory since we are at the lowest spread of the Fed Funds Rate minus the CPI YOY is at lowest level in history. Some would expect a massive recalibration back to the normal where the Fed Funds rate is 102 bps (basis points) above the inflation rate where the Fed Funds Rate would be 6.39%, but this is not anywhere close to reality. Again, let’s consider the more moderate approach in which inflation recedes on year-over-year recalibrations back to a 3.00% level, which we feel represents the overall market conditions with consumption levels and household liquidity to absorb higher costs. We now get to a projected higher level of Fed Funds Rate of near 4.00%, which would induce a recession based off acceleration of hikes and psychological factor of higher costs for debt servicing for consumers and corporations; not to mention the elevated costs to the U.S. government in deficit financing.

What we begin to see is that the DOTS plot of expectations of Fed Funds Rate futures tells us what the longer-term inflation picture looks like. 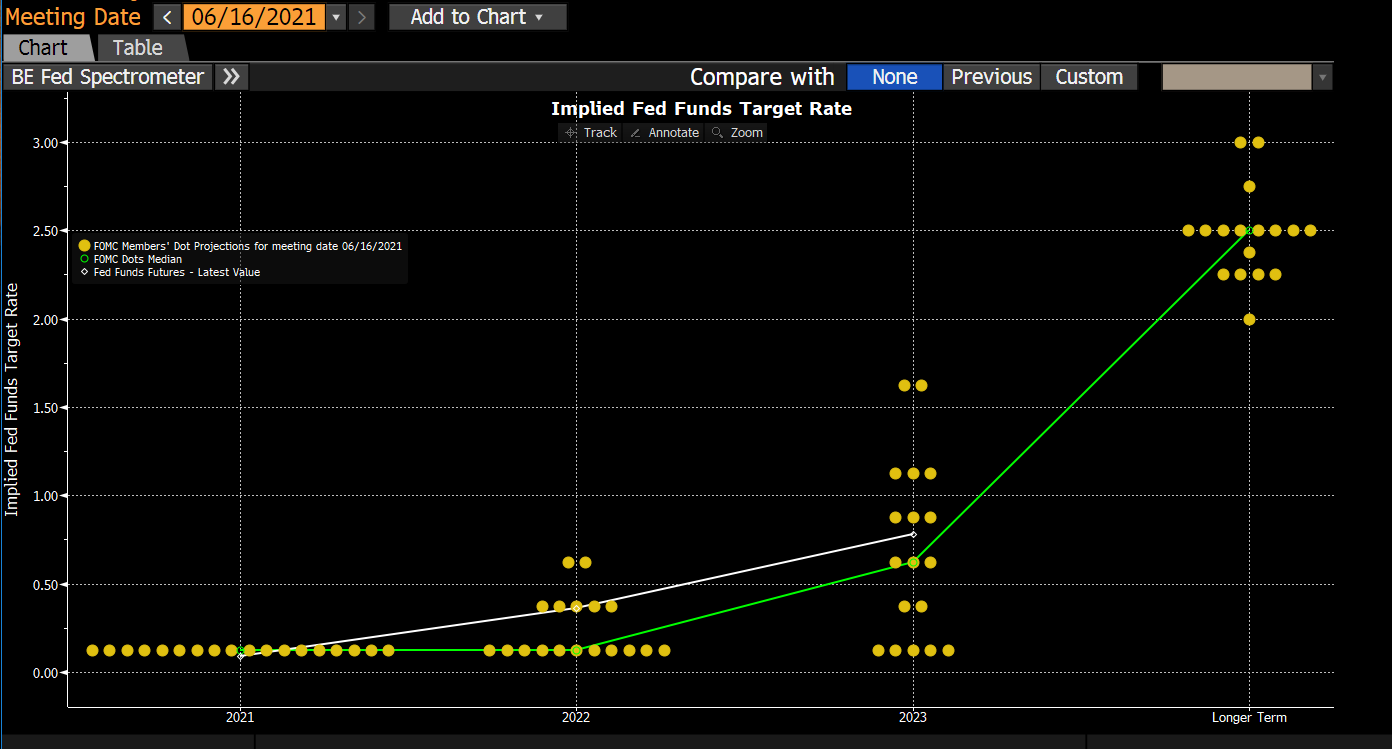 Past 2023 the Federal Open Market Committee (FOMC) foresees a 2.50% Fed Funds Rate which would put their inflation expectations at 1.50% based on historical averages. This appears perhaps a bit too low or at least represents that inflation eventually erodes economic expansions much quicker than anything other than an unforeseen economic shock or military event.

This takes us to the immediate or year-end recalibration that appears to be coming, or at least is setting the stage for a decoupling of the current inconceivable economic moment. While demand from foreign investors has buffered the trend that was in place for higher rates to represent higher inflation and elevated economic growth, it appears that the proliferation of debt and inflationary pressures are abating but not enough to justify the utopian economic balance – and a Federal Reserve who is purposely behind the game in addressing inflation – ultimately puts the path of least resistance to elevated rates by year end. This also includes that further fiscal stimulus, infrastructure implementation and easing of supply chain choke points could further accelerate growth, putting more pressure on interest rates and the Federal Reserve to act.

Ultimately, with spreads on corporates to Treasuries being at historically low levels, high yield indices producing sub-4.00% current yields and municipals being at historically low percentages to Treasuries means income must be highly scrutinized. Being nimble in shifting credit environments is crucial. For equities, the summer may produce some increased volatility on lower volume with the opening of the economies and travel and leisure taking precedent; but we continue to see focus on value-based investments, international diversification in Europe, the United Kingdom and Emerging Markets. In the classic book and movie “The Princess Bride,” the Sicilian villain continues to use the word “inconceivable.” After its continued use, ultimately the statement arises, “You keep using that word, I do not think it means what you think it means.”

Perhaps in the end, we use many words that have many different meanings to many different people and balancing empathy and logic with what the market is telling us is the key.

Related: What the Fed’s Rate Liftoff Could Mean For Stocks