Preparing Clients for the Specter of Higher Taxes

In talking taxes, it's tricky to keep things free of politics, but as advisors know, the Biden Administration is pitching one of the largest tax hikes the U.S. has seen in at least three decades.

To be clear, the president's proposal is just that...a proposal. There's support for it among most congressional democrats though some moderates are against it and, predictably, there's no backing from Republicans on the matter.

Smart advisors know something else. Plenty of clients outside of those rarefied income brackets. Some are likely already asking advisors how their portfolios will be affected if Congress signs off on the president's tax agenda.

Owing to the point that many clients instinctively consider higher taxes to be negative, they also instinctively believe markets will fall in the aftermath of higher levies being implemented.

Research from Invesco indicates don't always affect stocks the way investors are programmed to believe. For example, stocks performed well in the 1940s and 1950s even as taxes rose. Conversely, the 1970s, an era marked by stagflation, were unkind to equities despite declining taxes.

The Reagan tax cuts and President Clinton resisting substantial tax hikes paved the way for broad market upside in the 1980s and 1990s, respectively. In other words, stocks performed in accordance with tax policy during the Reagan and Clinton regimes. Conversely, President George W. Bush ushered in lower taxes, but stocks were mostly mediocre during the bulk of his presidency due to the bursting of the tech bubble (before he took office), the 9/11 terrorist attacks and then, late in his second term, the onset of the global financial crisis.

“We would caution against drawing any hard conclusions on this analysis. There are often many other factors at play, including, but not limited to, the stage of the economic cycle and the direction of monetary policy,” says Invesco.

Clients can take some heart in that, but advisors can't rely on history repeating. On the other hand, advisors can also calm skittish clients by confirming that equities have a track record of rising even when taxes do the same.

“The US stock market has largely performed well even in the years in which taxes—be it personal, corporate, or capital gains—were increased,” adds Invesco. “Most recently, the US stock market surged 30% in 2013 despite the Obama administration allowing the Bush-era tax cuts to expire at the end of the year. In fact, US equities advanced by 100% from the time of the expiration of the Bush-era tax cuts to the Trump administration passing of the Tax Cuts and Jobs Act of 2017.”

This Time Could Be Different

Again, smart advisors know history isn't guaranteed to repeat and while “this time will be different” is one of the most dangerous phrases in financial markets, this time really could be different if the current tax proposal is passed. 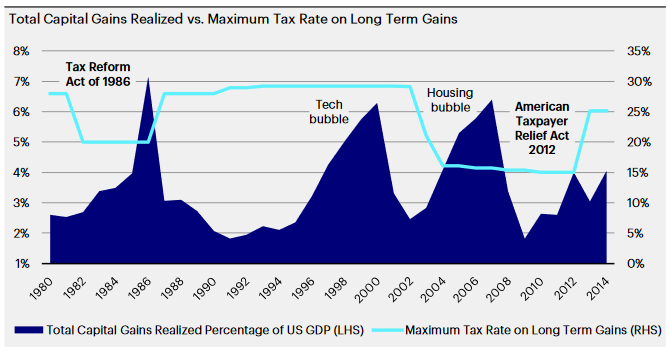 Still, there are plenty of caveats that could apply in the current environment that support the notion that raising taxes over the near-term. This isn't political commentary, but raising taxes, even it's “just on the wealthy and big business” when inflation is high and the labor market is challenged might not be a recipe for success.

And while the aforementioned history of stocks proving sturdy against rising tax backdrops is compelling and hard to ignore, it's a different world today. For example, the Bush-era tax cuts expired when stocks were recovering from the global financial crisis and were unlikely to move materially lower following the 2007-09 bloodbath. Today, the White House doesn't have that advantage. The coronavirus equity market recovery already happened and while stocks continued grinding higher, higher taxes could hinder further gains.

Making 2022 tax hikes all the more specious are the facts that the Federal Reserve is likely to raise interest rates next year and there is some resistance toward giving Jerome Powell another term as Fed chair. His term in that role expires in February.

Not to mention, there are no guarantees tax hikes will have the desired impact of increasing revenue over the long-term. What is known is those hikes will increase long-term tax burdens. Clearly, advisors and clients have a lot to consider on the tax front going forward.

Related: The Tax Consequences That Will Follow When the Infrastructure Bill Passes