Throughout the past 12 months we have been suggesting to investors that the financial world has shifted underfoot. In the U.S. we are witnessing the end of an era: the climax of the 40-year bull market in bonds supplemented by ever bigger policy puts. The culmination? A gargantuan policy response to covid. The massive $4 trillion growth in money supply was supplemented by 0% interest rates and trillions of dollars wired into consumer’s pockets. It is no surprise this sowed the seeds of future inflation. The fact that this easy money state persisted for over two and a half years provided the constant supply of water needed for the seeds of inflation to take root.

The Fed is finally applying the “weed killer” through higher rates but inflation’s roots have broadened and run deeper than anticipated. Yes, inflation may have peaked and will come down, but the path of the decline and where it bottoms are the critical questions today. It will take more than a topical application of rate increases to knock the tall weed of inflation down to the Fed’s goal of 2%. Our thought is that while CPI (Consumer Price Index) took the elevator up to a peak of 9.1%, inflation will take more of an escalator ride on its way down and will have difficulty reaching the Fed’s 2% goal in this cycle. Therefore, it strikes us that the recent rally in stocks (with the S&P up 9% in July alone) and shift back in leadership toward long-duration growth stocks should not be viewed as a sign of victory against what is a long-term Regime Change evidenced by sticky and persistent inflation and a Fed that may have no choice but to keep an elevated interest rate environment for not only this year but well into 2023.

Goldilocks and the End of the Bear Market?

The recent stock and bond rally seemed to be based on a belief that the macro environment granted the Fed, and its blunt tools, the precision to slow the economy to a level just right to keep the economy from a hard landing and at the same time allowing for a “pivot” toward lower rates in early to mid-2023. The market reaction to the Fed’s recent dual 75 bps (basis point) increases had been positive; however, it historically has taken a Fed Fund’s rate equal to the inflation rate to drive inflation down to low and stable levels. With Fed Funds at 2.25%–2.5% and inflation running above 8.5%, the Fed Funds rate is still deeply in negative real rate territory. If inflation’s path down the escalator stalls at the 4–5% level, there is still much more work to do. At this point, the Fed’s hawkish jawboning seems to us a recognition that they will need to keep the pressure on, and they still need to create more demand destruction as the main blunt tool to solve the supply-demand imbalance that resides throughout many categories driving CPI. Unfortunately, the recent market action in July and early August has ironically caused an easing of financial conditions. Equities were up and trading above historical averages, interest rates dropped, and spreads tightened on investment grade and high-yield debt; this — combined with a still-overheated jobs market — must have the Fed wringing its hands. Easing conditions are not what the Fed is trying to engineer and so perhaps the market is still a bit ahead of itself. Even the perennially dovish Fed Governor Neel Kashkari joined the hawkish bandwagon and said his biggest worry is that inflation becomes “more embedded” in expectations.

A comparison of current market metrics to previous bear market bottoms also points toward caution against the goldilocks scenario:

The main driver to our macro outlook remains inflation:

The strength of the jobs market is one of the reasons we believe inflation will remain sticky. For example, looking at July’s Non-Farm Payroll figures, it would be hard to argue that it was anything but strong. The headline number of 528,000 jobs was 2x the consensus expectation while the unemployment rate actually ticked down from 3.6% to 3.5%, coming within a whisker of the multi-decade all-time low. It should come as no surprise then that Average Hourly Earnings came in hot again and continues to remain above 5% year over year. This is important because strong job gains means strong wage gains, which means higher and stickier inflation will persist through wage increases.

Housing inflation is also sticky. While home sales are slowing due to the doubling of mortgage rates, the key question is, “If one can’t afford to own, what is the option?” Renting. Unfortunately, there is still a multi-million-unit shortage of housing borne from the previous housing crisis. What should be noted is weak home sales does not necessarily equate to weak rental demand. What is also being overlooked on the housing front is that while the Fed can destroy demand…it can also destroy supply — as evident by the drop in building permits and schedules. Wage gains and shelter costs are well over 50% of CPI. It is hard to see a 2% inflation number anytime soon if these categories remain sticky. Add in the bounce in energy costs, food shortages, continued war in Ukraine and China’s Zero Covid policies (at least for now) and onshoring, it seems the inflation “Wall of Worry” is still quite high. As for strength of the job market, it is unfortunate, but in this case good news is bad news for the path of Fed Funds and interest rates with consequent implications for continued headwinds for asset classes with longer-duration sensitivities. 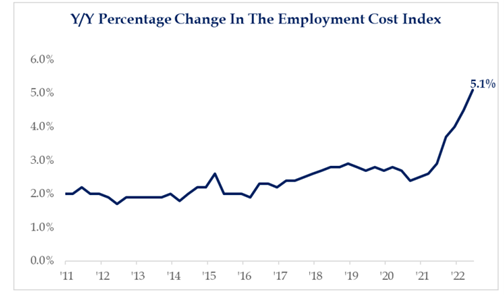 Let’s Get Serious. A Significant Change in the Fed’s Reaction Function:

It is of note that in July the Fed made a major move by switching their reaction function from Forward Guidance (which as it turned out was folly given the unpredictability of inflation) to “Data Dependency.” Well, now we and the Fed are all living in “real time” and given the volatility of the data, we should expect continued volatility in expectations around the path of inflation and the economy. Data Dependency — combined with the Fed’s comment that we might expect “unusually large” moves in Fed Funds — quickly worked its way through the yield curve and deepened the yield curve inversion lead by a rising front end and declining back end. Before the recent Fed meeting, the futures markets had a roughly 33% probability of a 75 bps Fed rate increase in September. Today, that probability has increased to 50%. It seems logical for the Fed to accelerate future moves to create the demand destruction necessary to put the inflation genie back in the bottle and that is certainly so if the Fed is serious about the 2% inflation goal. In our minds, this also “pushes out the pivot” that the markets priced in for early 2023.

Is There a Fed Put in Our Near Future?

It is also worth considering what a pivot looks like in this New Regime. As the following chart shows, for the last 40 years, the Fed has had the market’s back by way of the notorious “Fed Put.” Over that time, there has rarely been a Funds rate increase that exceeded the peak of the previous rate cycle. Unfortunately, for only the second time since 1980 we are heading there in September. 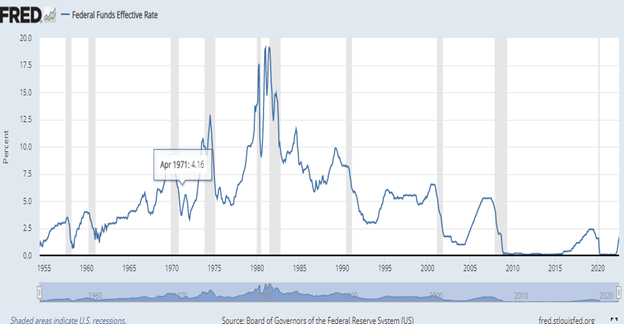 But what of the beloved “Fed Put?” There is a significant chance that as the economy slows and unemployment rises, the Fed shifts its reaction function to tilt toward its other objective — the jobs market. The Fed may back off on rate increases, however if inflation is still sticky, there likely will be a limit as to when the Fed pivots and how much it lowers rates lest it risk a repeat of trying to catch the tail of inflation it didn’t eradicate on the first go. This would be a different result then the markets have relied on over the last several decades. So, reliance on a meaningful “Put” should be considered with caution in this New Regime.

As we have said, we would not be surprised to see the recent market bounce give more ground given our view that inflation will come down but remain elevated and pernicious well into 2023. We think the bounce gives a chance for investors to capture some of the rebound by taking gains and repositioning portfolios toward more optimal outcomes in an environment still challenged by the same macro drivers we saw in the first half: Persistent Inflation, leading a Fed to go “Further and Faster,” Pressuring Rates and Slowing the Economy. The outcome of that mix is Continued Volatility. This is the “Regime Change” we have been talking about.

Viewed through the lens of a Regime Change driven by inflation, we would continue to be cautious on long-duration assets in both equities and fixed income. We suggest seeking out sectors that are quality focused (in the face of a slowing economy), income generating (for predictability of returns) and investments that benefit from this inflationary environment such as energy, commodities and select real estate. In fixed income we still favor higher quality credit over duration. The silver lining of a near tripling of yields in short to intermediate maturities is that the margin of safety against higher rates is much larger and cash (shorter duration) is no longer trash. Areas such as shorter-duration investment grade and upper quality high yield make sense as well as bank loans where one “unfixes their fixed income.” Shorter duration preferreds also have the potential to provide both income and defensiveness against rates. Given the recent bounce, we think this may prove a good time to take gains and reposition portfolios to better future proof against the environment evolving in the era of “data dependency” and against the backdrop of a lengthy Regime Change.

Related: Inflation Still a “Sticky” Situation for the Fed