It has been decades since most people have worried about higher inflation. Post COVID-19 economic developments, influenced by both monetary and fiscal policy responses, have investors reaching for dusty textbooks, or more likely, turning to google. A recent study shows Google searches for the term “inflation” at the highest levels since tracking began.

For most people inflation is a dry, arcane, academic argument. For those who do pay attention, inflation has often taken on the role of an imaginary “bogeyman”- always lurking in the shadows, but never making an actual appearance. However, if inflation does indeed break out there will be real-world consequences for consumers and businesses.

The most important lesson from Economics 101 is that prices are ultimately decided by supply and demand. While academics and policymakers will argue endlessly about the causes and effects of inflation, most people agree that ultimately supply and demand factors will drive price fluctuations.

So what is driving the macroeconomic supply and demand today?

Most of the post-pandemic debate has focused upon the demand side. Certainly, there are many significant drivers of demand:

Low interest rates led to a wave of mortgage refinancing. This helped free up the monthly disposable income of higher-earning families. 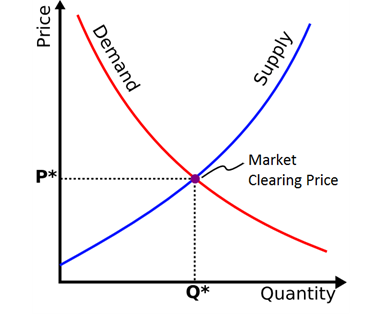 The supply-side shows signs of stress as well.

In short, prices are feeling pressure from both the supply side and the demand side. It is no surprise then that people are fearing a return of inflation.

Have those fears been justified by the data?

Does the Data Suggest Higher Inflation?

The problem with the primary measure of inflation- the consumer price index (CPI)– is that it is a lagging indicator. It measures inflation after it has already occurred. Unfortunately, the CPI serves as confirmation, not a forewarning.

The bizarre nature of the data collected throughout the COVID-19 pandemic further complicates analysis. With economies entering lock-down at different points of time and for varying durations, it was inevitable that the data would be muddled as we re-emerge on the other side.

It is for these reasons that economists and investment strategists seek out anecdotal or alternative sources of data that might serve as leading indicators of future price increases. Unfilled job openings, bookings on travel or dining websites, delays in shipping/logistics, shortages of commodities or components in manufacturing- all of these are part of the mosaic of inputs that will eventually wind up reflected in the CPI.

Forward-looking analysts track the leading indicators in order to maintain an edge on everyone else. For many of these analysts, the warning indicators are flashing yellow, if not red.

The median expectation for one-year inflation climbed to 3.2% from 3.1% last month, according to a survey conducted by the Federal Reserve Bank of New York. The estimate for three-year inflation crept to 3.1% from 3%. Both expectations now sit at their highest levels since mid-2014, signaling Americans are gearing up for the recovery to drive a rise in inflation.

Inflation doves claim we are witnessing a short-term, post-pandemic “pop.” The supply and demand factors will dissipate and then price increases will settle back down to the stable, boring 2% or so that everyone had grown accustomed to.

Maybe that will happen. But a larger concern is that this uptick in inflation is secular rather than cyclical, and the supply and demand forces driving the recent increases in inflation become entrenched. Those fears are driven by:

The Federal Reserve has so far sought to reassure everyone that the inflation dragon remains slain. However, when current Secretary of the Treasury and former Chair of the Federal Reserve Janet Yellen recently mentioned that the Fed might have to raise rates at some indeterminate point in the future to combat rising prices, investors freaked out and the S&P 500 started selling off. Yellen quickly backtracked on her statement and markets recovered. It seems that even acknowledging some basic economic fundamentals is too much truth for some investors to bear.

Why do investors fear rising inflation?

The potential negative consequences of inflation are far too numerous to discuss within this short post. We will instead focus on inflation’s impact on portfolio construction, particularly upon the bond or fixed income allocation. For decades bonds have served a significant dual role in portfolio construction, providing investors with a decent level of income as well as capital preservation.

Rising inflation undermines both of those key roles. Most bonds literally provide a fixed amount of income; few bond yields adjust for rising interest rates. In absolute terms, the income received from bonds has been quite low ever since the Global Financial Crisis of 2007-09. However, the value of that meager income is further undermined by rising inflation.

Moreover, the monetary policy tool used to halt inflation is to “cool down” the economy by raising interest rates.

If the “cure” for inflation is to raise rates to 4%, 6%, or whatever the appropriate level might be, how valuable is a bond that is locked in to a 2% payment every year?

Not very valuable, unfortunately. The price of a 2%-yielding bond will fall, and significant capital losses are certainly possible for what many people consider to be a “safe” investment.

We have seen this phenomena of rising interest rates/falling bond prices play out on a short-term, cyclical basis before, as the charts below illustrate.  However, it has been a long time since we’ve entered a secular period of high inflation, rising interest rates, and true, prolonged pain in the bond market. 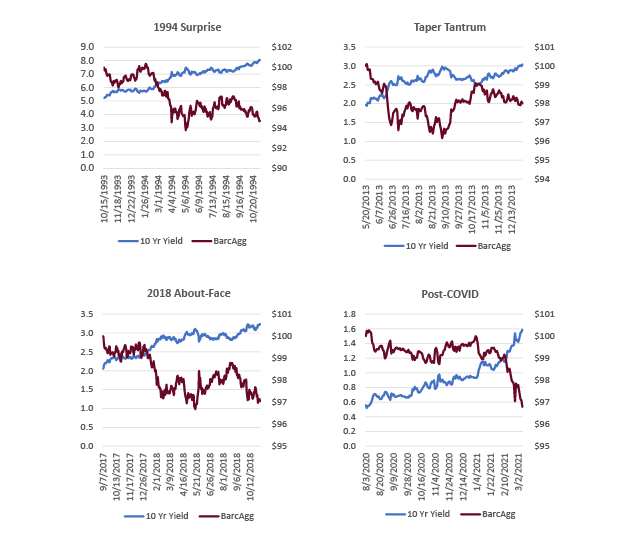 Swan Global Investments has been concerned about this moment for years. We have discussed the many challenges facing bonds and the problems with portfolio construction in-depth previously. Our argument is that it is no longer safe to assume that the factors that drove the success of traditional asset allocation models will be true going forward. A new way of thinking is required.

Our philosophy has always been to remain “Always Invested, Always Hedged.” We have been actively managing risk since 1997, and we do it without any bonds. Through a variety of hedged equity solutions, we seek to actively hedge our market exposure via the use of put options.

Hedging has served us well through previous market downturns, and we believe it may continue to do so in future bear markets.