Goldman Sachs puts out some pretty interesting information on hedge funds. In their most recent report published in February, they analyzed 788 different hedge funds which account for $2.6 trillion of gross equity positions. That is a fancy way of saying those hedge funds manage $1.7 trillion and $873 billion of short positions.

Using something called 13F filings, Goldman breaks down their observations and gives some insight into what is happening.

First, let’s take a look at hedge fund and S&P 500 performance. While the S&P 500 has logged the worst start to any calendar year since 2009 (down 9%), the basket of the most popular hedge fund positions held (as tracked by Goldman through those 13F filings) is down 12%.

Looking back at the trailing 12 months, The S&P 500 has a positive 14% return while their basket of hedge funds is down 7%. That is a 21 percentage point difference in performance.

That is also known around finance people as something we call, “massive”. Chart below. 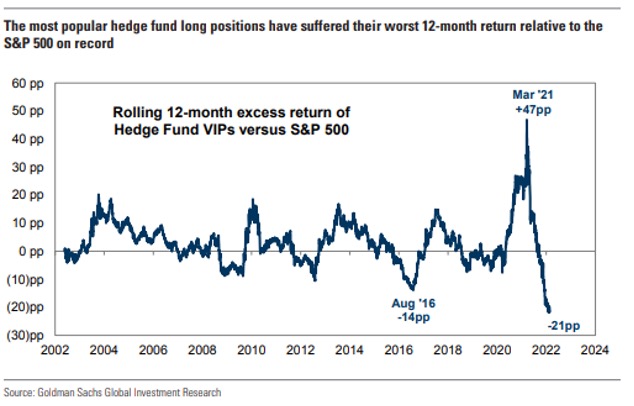 The top five stocks held by these hedge funds are – MSFT, AMZN, GOOGL, FB, and AAPL.

So generally, the hedge fund investors pay 2% a year in management fees, 20% of any profits above some high water mark (for example, any profits above the first 8% of gains), and have very, very limited liquidity.

And you get negative 21 percentage points of UNDER PERFORMANCE…But hey, it’s impossible to attach a price to slinging around that you are invested in a hedge fund at a cocktail party.

Someone: “Oh, you do wealth management…I’m an investor in a hedge fund that’s super exclusive and specilizes in…”

Me: “Oh, look! There’s my Aunt Jenny’s cat groomer from back when I was in third grade. I’m gonna go say hi. Excuse me, I’ll be right back.”

Everything You Need To Know About Hedge Funds

For those who say, “Yeah, but what about that part of the chart where the outperformance was up 47 percentage points (pp)???”  Ahh, yes, good observation.

I’ll sign off with this opinion: No one needs these BS hedge funds unless you are so boring that you think you need that sort of weight to be interesting at a party.

In that case, you’ll find me with Aunt Jenny’s cat groomer.

Related: Investing Involves Uncertainty. The Trick Is To Manage Risk