The Market’s Concession During a Recession

While a recession has not been officially announced — which is not uncommon — the markets have quickly shifted to price it in as the year has progressed. During those times, I am reminded of the five stages of grief and how it compares to the investor’s reaction to good and bad news and ultimately, conclusions they have drawn via their investment decisions. The stages are denial, anger, bargaining, depression and ultimately acceptance. On a very superficial analysis, it appears we have the first four are all happening at the same time though at different degrees. While this may seem an overly simplified observation, in reviewing various segments of the markets and it is easy to see how it may be reality. In viewing the credit markets, one could conclude that acceptance has been achieved.

In reviewing the history of recessions and various metrics, one not only sees a pattern but also one glaring warning sign when attempting to extrapolate current conditions from history. As we all attempt to project ultimate conclusions, we are limited to three various forms of projection: extrapolate, estimate, and speculate. Think of extrapolating as momentum chasing, estimating as attempting to balance out shifts in current markets that are significantly different than future results and lastly speculating as mainly driven by emotion and perhaps riddled with disregarding many conflicting variables. Ultimately, any comparison in the broad sense of one recession to others, it becomes abundantly clear that there is typically one significant change that is often disregarded at the time but quickly turns into an “aha” moment that appears obvious after the fact.

To get a view, consider the S&P 500 price relative to past recessions. We broke this into two periods, 1960–1991 and 1991–2022 to display our call for the new economic framework that is needed to evaluate cycles moving forward and ultimately, why our Regime Change for portfolios is correspondingly required. The large differentiating factor between the two periods is the elevated inflation number that was in a secular uptrend rather than the last 30 years of declining inflationary periods.

What is glaringly obvious is the price action during recessions mirrors what we are seeing now as well as there were twice as many recessions relative to the last 30 years. Hence, we get shorter expansions which are primarily driven by elevated inflation which erodes the largest contributing component of the economy: consumption. 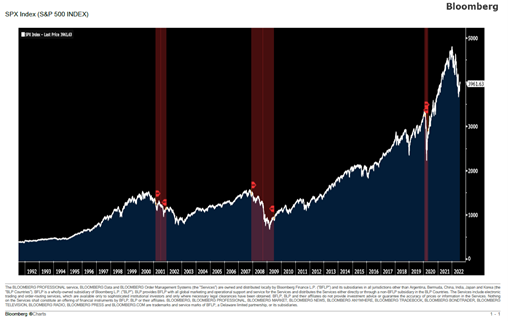 The last 30 years shows long expansions when the wealth effect on spending and consumption took on a new historic magnitude. If one were to conclude that the 2020 pandemic recession — which was synthetically induced and not a byproduct of natural recession indicators — we would tend to agree, and we could remove from a historical standpoint. However, the byproduct of that recession also led to never-before-seen stimulus which led to an even more aggravating inflation situation.

While we tend to see the markets overreaction to the slowdowns and ultimately the bulk of the equity damage is done prior to the official recession proclamation, the length of the recession is a bit of a conundrum. While expansions don’t die of old age, they do become more vulnerable to rapid shifts of stress. A long expansion does not necessarily mean a long recession; however, the confluence of current negative variables is significant enough to be pragmatic.

We see a different pattern in the evaluation of the 10-year U.S. Treasury. We used the entire 60 years and broke down two different periods as we did above into green and red boxes. 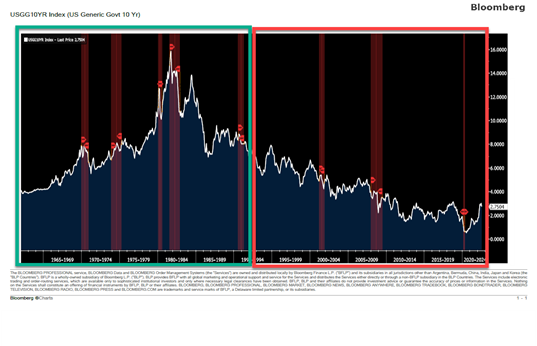 Here we see those peaked yields within a cycle in the 10 years coincide with typical ultimate recession points. So, while we see many always disparaging the yield curve inversions and overall predictability success, it often is very reliable. It becomes more effective when combined with certain debt spreads, credit rating transitions, earnings estimates and consumer sentiment. Again, we see one of the biggest differences from past recessions occurring in the pandemic recession of 2020 and another reason why some form of nuanced weighting should be done.

The current situation shows a recent spike of 3.50% in the 10-year Treasury and, as of this writing, has compressed 75 basis points to a 2.75%. The backdrop of this drop has seen more negative economic prints both domestically and internationally. With the 10-year Treasuries being the ultimate safe haven from risk, the large allocation increases recently to it represents a growing belief of not only a U.S. recession, but a global one. The global recession case is affirmed with the U.S. dollar bullish action compared to nearly every major currency in the world, despite some structural issues that should be pressuring the dollar downward.

We also see this in the Fed Funds Rate set by the Federal Reserve. While data only goes back to 1971, we see a similar patter where the Fed’s reactionary stance has always led to an over reaction to a certain degree in shifting economic and market conditions.

One can clearly take note that the 1971–1991 period was a time that had the Fed Funds Rate managed by a micro level of spikes and declines in the inflation data. Former Fed Chairman Paul Volcker had to use unconventional levels of moves to tame inflation. Ultimately, inflation and the interest rate cycles had to relent to demand destruction and increased recession risk to tame one of the two biggest risks to the market. Hyperinflation and deflation both have a psychological component that is difficult for the Federal Reserve to address with monetary policy and the legislative bodies with fiscal policy.

One condition we often look at in every market and economic metric is anomalies. In fixed income in particular, anomalies often lead to some of the biggest opportunities as well as signs to remove risk. The balance of negative-yielding debt that has declined from a high of $18.3 trillion less than two years ago to a current reading of $2.4 trillion is one of the more historic anomalies. The mere scenario in which negative-yielding debt was acceptable is an anomaly in and of itself, but the severity of a $18+ trillion level makes the tulip mania clutch their pearl necklace.

On anomaly that has stood out to us is the variance of the Producer Price Index (PPI) finished goods and the Consumer Price Index (CPI). Most current quotes on the PPI are on final demand which was changed in 2010 from the finished goods. One large reason was to steady out the volatility of the number, which should not come as any surprise to anyone who has a bit of skepticism about government-released metrics when changes occur. To illustrate this case, consider the current PPI finished goods number (calculated since 1948) is 18.60% while the PPI final demand is 11.30%. The PPI final demand is the one that gets publicly released to adhere to their stance shift change in 2010.

So, just as there has always been skepticism about the CPI shift some 30 years ago with regard to housing component, over time we just become accustomed to these shifts. However, the Bureau of Labor Statistics still produces the PPI finished goods number and its comparison to the CPI provides just how much stress there is in the marketplace from a historical perspective. 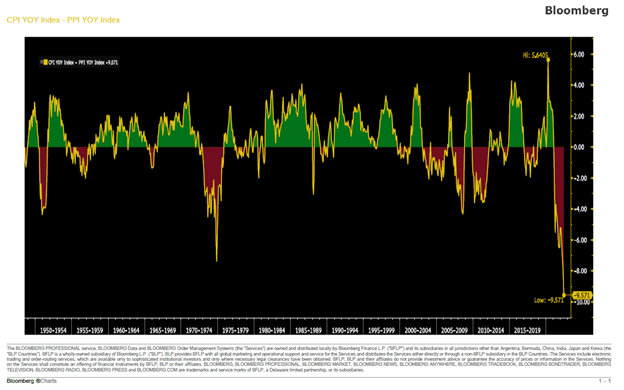 One should note just how the last two decades are a complete reversal from what the previous five decades exhibited. From the end of the recession in 2001, the PPI was higher than the CPI nearly 75% of the time, a complete reversal from the last 50 years. The one more important distinction is that in nearly 75 years of data, we have not seen this amount of elevated producer prices relative to consumer prices. Take note this is not a result of an anemic low in the CPI number, but rather a level of inflation at the consumer level that has only been seen a few periods in the 1970s and early 1980s.

What this points out is that corporate earnings pressures may begin to really gain some troubling levels. If they are already seeing top-line estimates come down due to consumers feeling the clutches of inflation, then the input costs (materials, labor, regulations, etc.) increasing historically means a dual squeeze akin to a bear hug.

So, while the current releases for earnings are not troubling though they are a bit below what we have seen in outperformance, the real scrutiny is on the projections for year end. These numbers have been coming down as evidenced from the chart below. The equity markets will be monitoring the projections and cautionary statements about year end while we work through the second quarter’s earnings announcements. 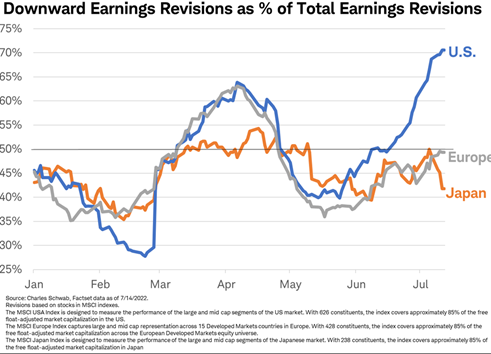 Long term, recessions and market duress could create large opportunities for those who have an elongated timeframe for their investments. However, we believe a shifting framework for forward-looking cycles means a shift in how assets are managed is necessary. The inflationary secular cycle has averaged from trough to trough of a little over a decade. Perhaps this could go through two secular inflationary cycles, but even if it was isolated, we must note that even one cycle could contain two recessions within it relative to recent experience of an expectation of one recession. This leads us to conclude that moving forward, more tactical movement within a cycle in allocation of assets, a more balanced portfolio built around multiple contingencies is necessary, and assets that may have been shunned in the last 30 years may find a tailwind in the next decade or so.