The Horns of Fed‘s Dilemma

S&P 500 gave up Thursday‘s gains much too easily – not even the short window of opportunity gets acted upon. Medium-term trend is winning – stocks will roll over to a fresh downtrend, it‘s a question of time. Bonds aren‘t offering too much of a reprieve – the 10-year yield didn‘t even decline below 1.70% when testing below 1.50% was doable. This merely highlights the brief time window for CPI inflation to make a peak – before raising its head once again. Commodity price inflation isn‘t going to be tamed, and Friday‘s non-farm payrolls have been a last good figure before we see further deterioration. As I wrote that Q1 GDP could very well be negative, the same goes for Q2 GDP – I‘m counting with stall speed.

For now, each upcoming Fed meeting till September, has 50bp rate hike priced in. The question remains what happens after September – would the Fed pivot already? Crude oil prices could be more than easing by that time, if you know what I mean. The focus would have shifted from inflation to economic growth support – that would be the drumbeat of the day. Precious metals are to be the first to anticipate the next dovish turn (backing off tightening), and that moment could happen later in summer. The copper upswing is likely to continue, and factors beyond China and supply with stockpiles, continue to speak against a deeper downswing. It‘s a bit similar to the realization that not even the OPEC+ production increase would be enough to satisfy world demand.

The key dilemma facing the Fed – would inflation slow down enough to support propping up the real economy again? Or would they need to keep tightening as (in the larger scheme of things) inflation would be barely dented by September? Stocks are watching with a bearish bias – earnings are to be hit. 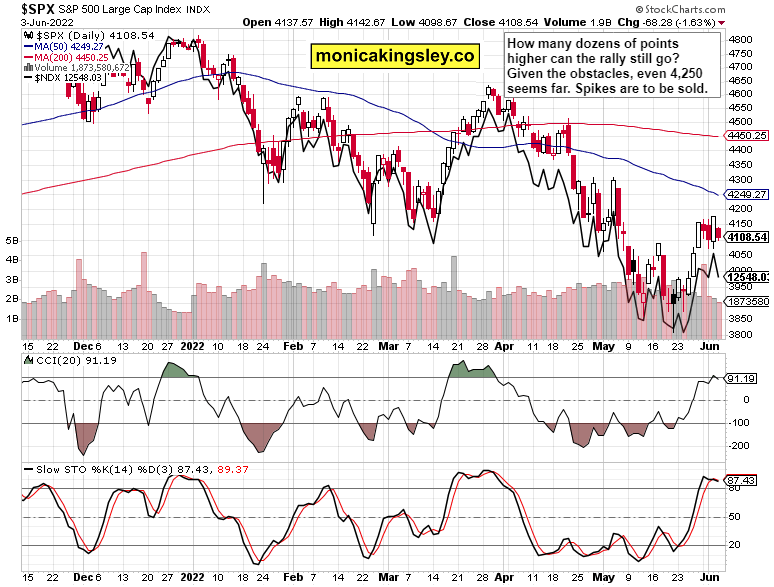 The headwinds are blowing, and they‘re stiff. Should 4,220 be cleared (that‘s a big if), the bears would become very active again. The bulls don‘t have the luxury of time as the current lull in positive economic data and bond market performance, is slowly drawing to its end.

The HYG engine is seriously sputtering, and the quality debt instruments pause is turning out a bit too shallow. Wobbly stocks and wobbly bonds – the local peak in yields is in, but don‘t look for it to last. Consequences for real estate loom.

Precious metals are turning up, in a one step forwards, one step backwards fashion. It‘ll give way to two steps forwards though as the countdown for the metals to come back very much alive, is on. Remember, they are a leading indicator. 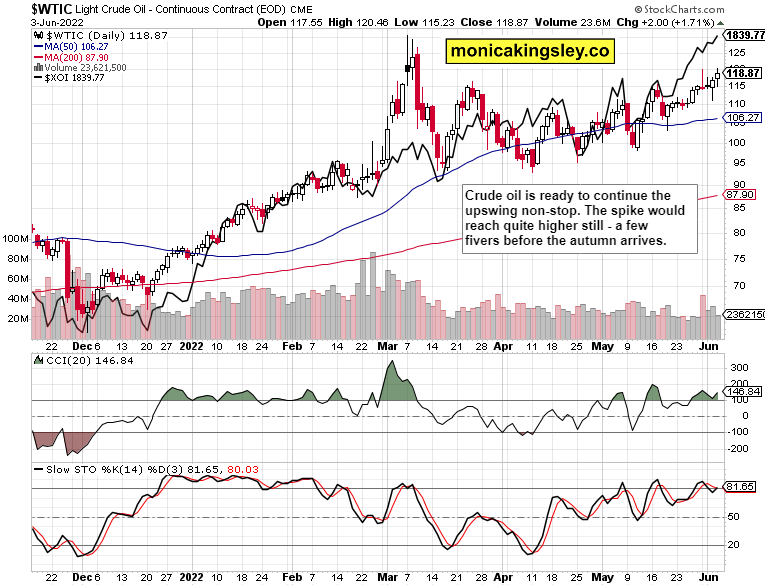 Crude oil is about to continue running, pretty much unimpeded – and oil stocks have been arguably the best sectoral pick. Much higher prices are to follow, and the gains would be even greater in gasoline and heating oil – yes, fuels that keep the economy running, have been outperforming for quite a while already. 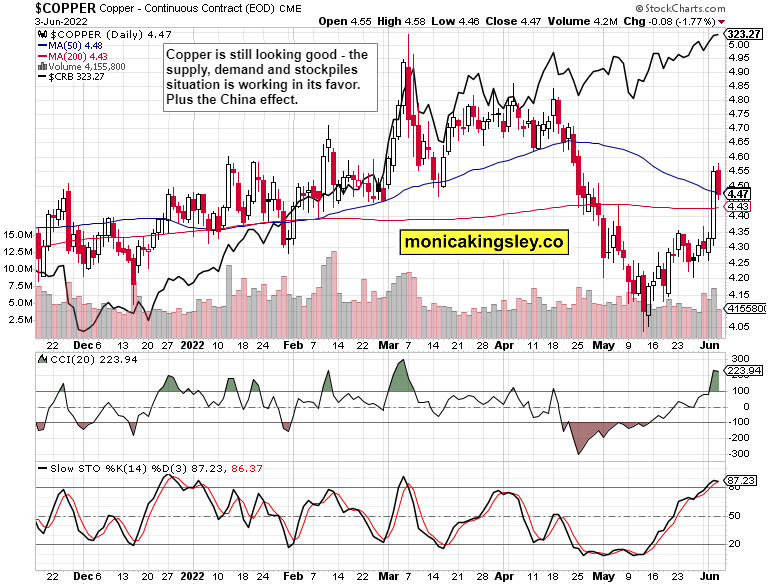 Copper is looking increasingly fine – Friday‘s correction didn‘t reach deep enough in the least. Base metals are improving, and would continue muddling through with a bullish bias.

Cryptos still aren‘t catching their breath, and little wonder – the medium-term direction remains down, and daily shows of remarkable strength look best to be sold.

S&P 500 bulls can‘t be counted on to get too far. In fits and starts, the upswing attempts would get sold – just how far above 4,200 could they get? Given the many headwinds from bonds to oil and other commodities, being on the lookout for a selling opportunity, is the best that can be done. The economy keeps slowing down, and real assets haven‘t yet peaked. Should inflation not slow down meaningfully (at least for a couple of months), the Fed would have to remain hawkish for longer than it would be comfortable with. With 3.25% in 10-year Treasury yield approaching, I‘m looking for further trouble in bonds as stocks haven‘t sustainably bottomed yet. Enjoy the profits on the long side within real assets as that‘s still the go-to asset class.