Tech Leads Market Declines on a Down Wednesday

After the market rose to intraday highs on Wednesday (Dec 9), the indices pulled back and closed in the red - largely led by the tech sector.

We may have reached a crossroads in the market between mixed short-term sentiment, and mid-term and long-term optimism. In the short-term, there will be some optimistic days where investors rotate into cyclicals and value stocks, and pessimistic days where investors rotate into tech and “stay-at-home” names. On other days, such as Wednesday, the markets may broadly decline, and be led by specific sectors. On Wednesday, for example, the leading laggard was tech - specifically high flying chip stocks.

In the mid-term and long-term, there is certainly a light at the end of the tunnel. Once this pandemic is finally brought under control and vaccines are mass deployed, volatility will stabilize, and optimism and relief will permeate the markets. Stocks especially dependent on a rapid recovery and reopening, such as small-caps, should thrive.

According to Ed Yardeni, president and chief investment strategist at Yardeni Research, “Renewed lockdown restrictions in response to the third wave of the pandemic are likely to weigh on the economy in coming months, but we don’t expect a double-dip…(but) the economy could be booming next spring if enough of us are inoculated against the virus.”

Other Wall Street strategists are bullish on 2021 as well. According to a JPMorgan note to clients released on Wednesday, a widely available vaccine will lift stocks to new highs in 2021.

“Equities are facing one of the best backdrops for sustained gains next year,” JPMorgan said. “We expect markets to be driven by recovery from the COVID-19 crisis at the back of highly effective vaccines and continued extraordinary monetary and fiscal support.”

On the other hand, for the rest of 2020, and maybe early on into 2021, markets will wrestle with the negative reality on the ground and optimism for an economic rebound.

Additionally, since election week, the rally has invoked concerns of overheating with bad fundamentals. Commerce Street Capital CEO, Dory Wiley, advised caution in this overheated market. He pointed to 90% of stocks on the NYSE trading above their 200-day moving average as an indication that valuations might be stretched.

“Timing the market is not always well-advised and paring back can miss out on some gains the next two months, but after such good returns in clearly a terrible fundamentals year, I think taking some profits and moving to cash, not bonds, makes some sense here,” he said.

Amidst the current fears of a stall in economic recovery with further COVID-19-related shutdowns and no stimulus, it is very possible that short-term downside persists. However, if a stimulus deal passes before the end of the year, it could mean more market gains.

Due to this tug of war between sentiments, it is truly hard to say with conviction that another crash or bear market will come. If anything, the mixed sentiment will keep markets relatively sideways. 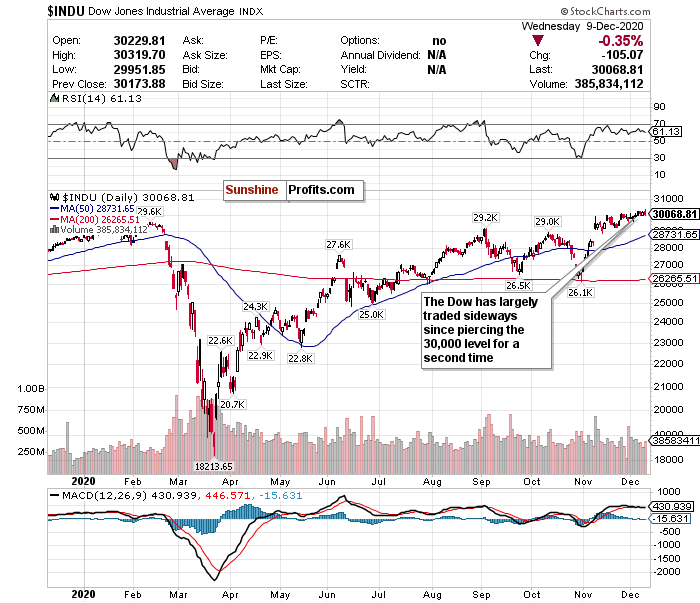 Since piercing the 30,000 level for a second time last Friday, and reaching record highs, the Dow Jones has largely traded sideways and hovered around the 30,000 level. There are some questions in the short-term as to whether or not the Dow can maintain this level. Outside of the Russell 2000, the Dow may be the index most vulnerable to news and sentiment.

Volume has also quietly declined this week as well, which poses doubts on how sustainable the 30,000 level is. Low volume, especially a declining trend in volume, means that there are fewer shares trading. Lower volume also means less liquidity across the index, and an increase in stock price volatility.

With so much uncertainty and the RSI still firmly in hold territory, the call on the Dow stays a HOLD.

On pessimistic “sell the news” kinds of days, the Dow may have more downside pressure than other indices. Many cyclical stocks that depend on a strong economic recovery trade on this index, and any change in sentiment can adversely affect their performances.

It is hard to say with certainty that a drop in the index will be strong and sharp relative to the gains since March - let alone November. But for now, as seen in the last week, I believe that we could be in a sideways holding pattern while investors digest all the news being thrown at them on a daily basis. For an ETF that attempts to directly correlate with the performance of the Dow, the SPDR Dow Jones ETF (DIA) is a strong option.