Squaring the Bets Prior to the Fed

Barely visible, but still a red candle – does yesterday mark a turning point? Even the volatility index refused to decline further on the day, and the option traders increased their put allocations. Is this a real reason to be cautious, or it represents mere window dressing before the Fed?

When it comes to the sectoral view, not much has really changed in the S&P 500. Technology rose yesterday but gave up all intraday gains. Value stocks appear ready for a breather, and financials, energy and industrials all declined. That doesn‘t bode extraordinarily well for today‘s session, but this is not the place to look at when it comes to trading today‘s markets.

It‘s the long-term Treasuries that I am focused on the most. Still as extended as lately ever relative to their 50-day moving average, they‘re weighing heavily on the markets. Stocks have gotten used to their message of rising inflation and economic recovery as we‘re still in the reflation phase, and not in the inflation one – but it‘s the precious metals that are suffering here, showing best in the copper to 10y Treasury yield ratio.

I am not looking for the Fed to act today by adjusting its forward guidance stance or language, or taking a U-turn on inflation. No, they‘ll maintain the transitory stance even though markets are transitioning to a higher inflation environment already. The Fed won‘t do much this time.

In other words, the reflation (of economic growth) is working and hasn‘t turned into inflation (rising or roughly stable inflation expectations while the economy‘s growth is slowing down). We‘re more than a few quarters from that – I fully expect really biting inflation (supported by overheating in the job market) to be an 2022-3 affair. As regards S&P 500 sectors, would you really expect financials and energy do as greatly as they do if the prospects were darkening?

So, I am looking for stocks to do rather well as they are absorbing the rising nominal rates.

And this still translates into yesterday‘s throughts:

(…) Global liquidity isn‘t retreating exactly, emerging markets are building a solid base regardless of the dollar going higher two days in a row, and emerging market bonds are fighting to recover just as much as long-dated Treasuries. Coupled with the sectoral analysis, this is conducive for the unfolding stock market upswing and for commodities as well. We‘re still in a constructive environment for both, and I look within the latter at especially copper, nickel and iron to do well.

For gold, the key question remains whether copper upswings will outpace any yield increases on the long end, which have moderated their increases in Mar compared to Feb. That‘s good but not nearly enough given that even gold afficionados have come to expect lower prices lately quite en masse. Sign of capitulation off which the upswing was born? Yes, and the key questions now are whether we‘re seeing a pause, or a top in the upswing,  and whether the next selling pressure would break below the $1,670 zone or not – see my early March game plan.

The volume profile thin zone around $1,760 appears out of reach for now, without a Fed catalyst. I don‘t look for the central bank to invite any speculation on when the next rate hike might come (forget Brazil‘s example). They might not even talk about bringing down rates at the long end through a twist program. I certainly don‘t look for clues as to increasing the $120bn monthly pace of monetary injections. Unless the market perceives the Fed as underplaying the threat of inflation and showing tolerance to its palpable overshoot, the overall mix of positions and conference statements might bring gold under renewed pressure as it meanders a little below $1,730 as we speak. 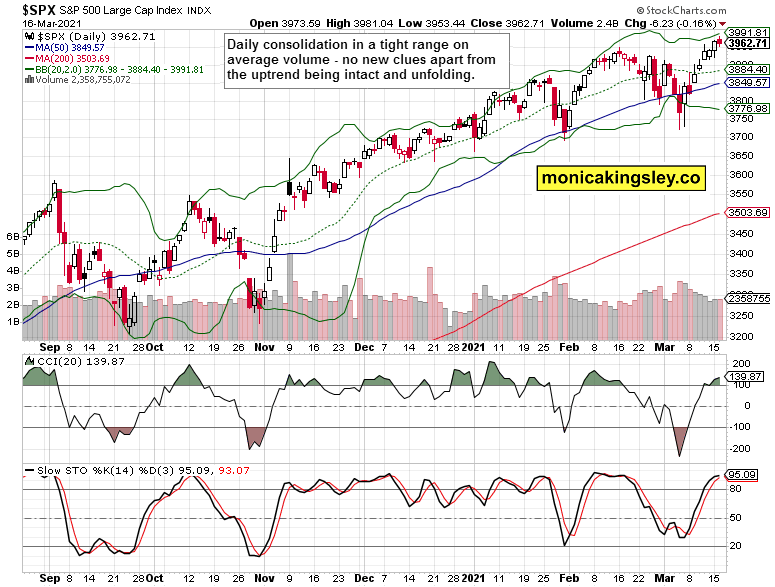 The S&P 500 upswing took another daily breather yesterday in the end, and the volume doesn‘t send clear signals either way. Consolidation followed by new highs appears though the most likely scenario. 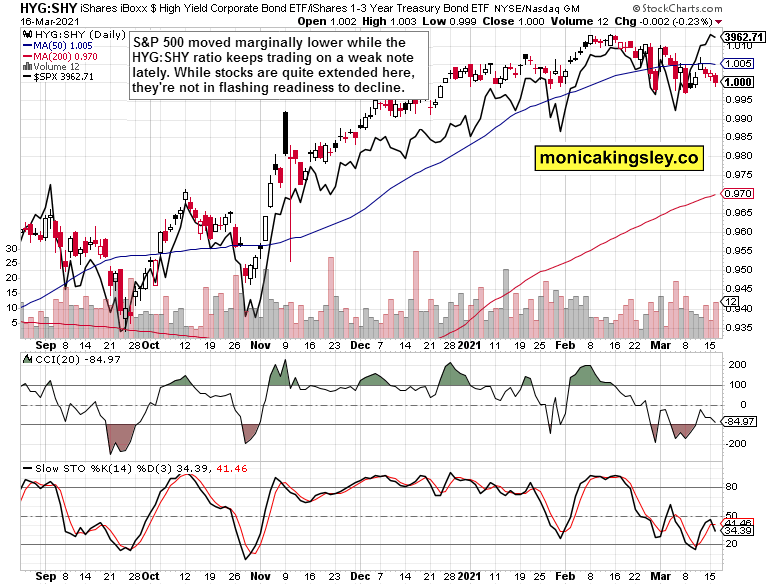 After quite some time, stocks are trading at very elevated levels relative to the high yield corporate bonds to short-term Treasuries (HYG:SHY) ratio. Now, it‘s three days in a row that the latter doesn‘t confirm the stock market upswing. The bulls better be cautious here over at least a few sessions as the latest historical evidence shows that Fed pronouncements haven‘t been accompanied by fully risk-on moves exactly. 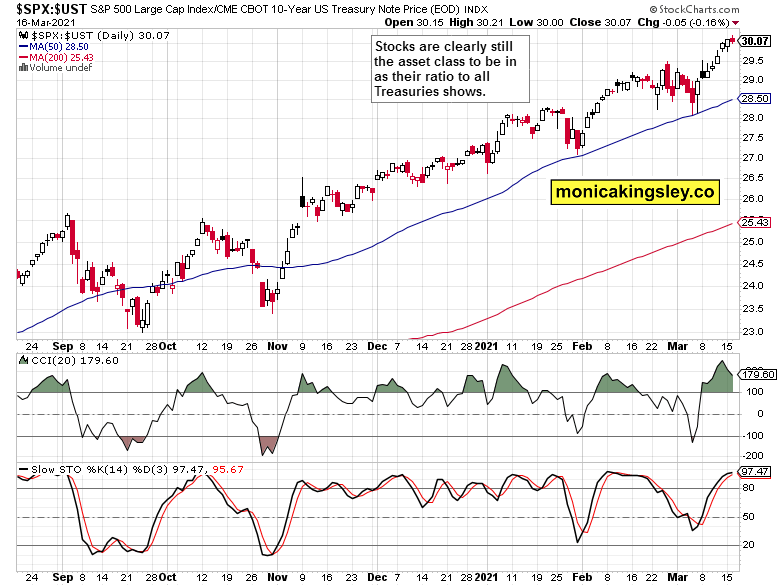 Let‘s not forget the big picture, and that‘s of the stock market rising at the expense of debt instruments. Please note how little has the early Mar correction achieved in denting the S&P 500 appeal. The stock market bull is alive and well, very well actually.

Gold in the Straits 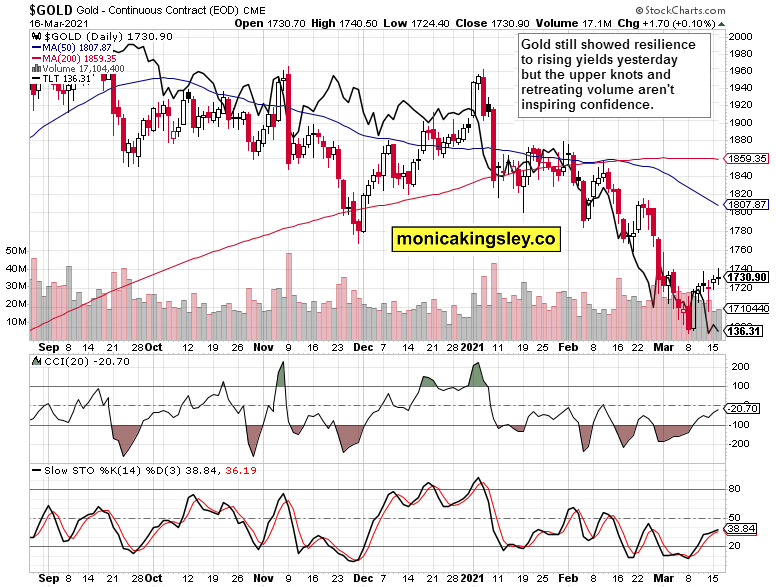 Gold still remains resilient to rising yields, but its inability to rally convincingly is worrying for the bulls. After all, this $1,730 zone shouldn‘t have been any real obstacle after three days of the rally, yet the yellow metal had to rise from the dead on Friday to fight another day. And given that it hasn‘t progressed since, it makes me think the bulls are hanging around for a remotely possible Fed surprise only. 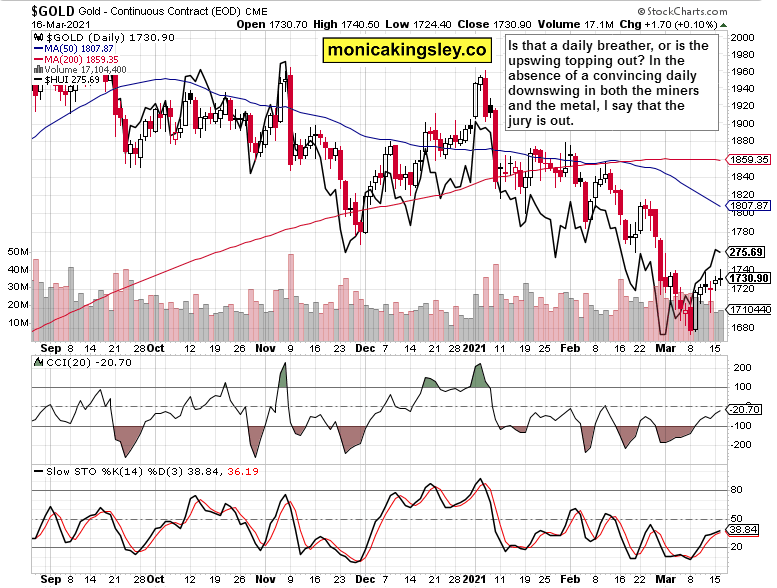 It‘s only the miners that are kind of still positive here. Yet, even their upswing was challenged yesterday, but that was on low volume. And that‘s constructive for the bulls when it comes to interpreting yesterday‘s events. 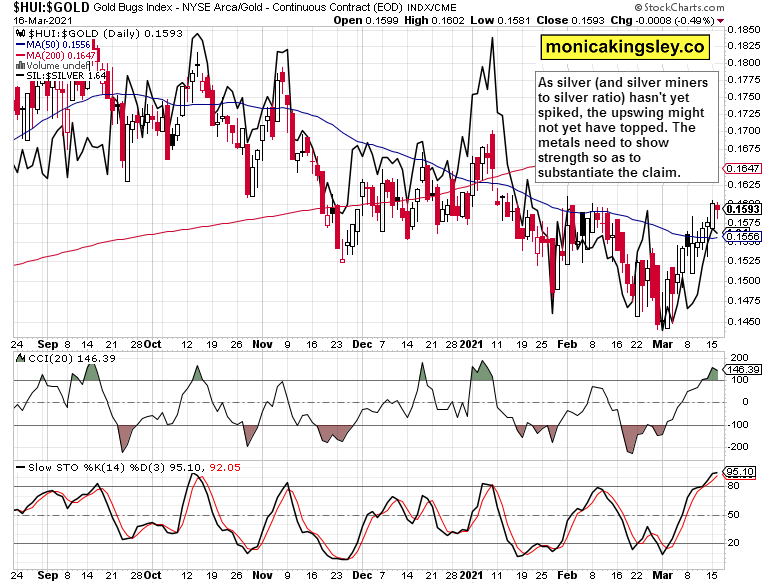 The lack of silver outperformance before the sellers take over, is another sign why the upswing might not be over just yet. Still, these are just secondary clues, for nothing is more bullish than rising prices, which is what we obviously haven‘t seen in the metals much really. 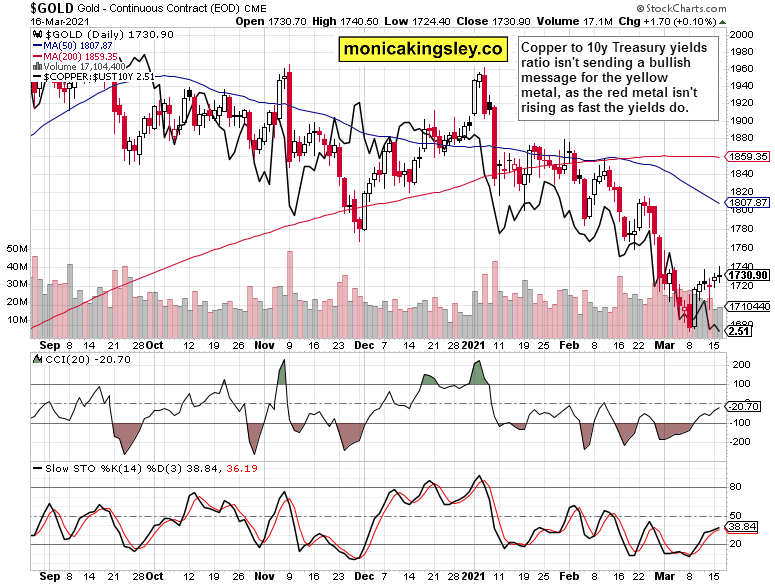 While not tracking each other as closely as lately, the copper to 10y Treasury yield is sending an ominous signal still. The key question is whether long-dated Treasuries rise, or gold falls – I am not looking for copper to deviate from the current steeply rising trajectory much.

S&P 500 is again entering daily consolidation mode, justifying my decision to take some of the prior profits off the table earlier today. While the Fed won‘t likely deliver real surprises later today, the credit markets are flashing warning signs more noticeably than yesterday. Still, the stock market bull is very far from making a top.

Gold is being increasingly more challenged and stuck in the $1,730 zone, instead of clearing it.The yellow metal awaits today‘s Fed pronouncements, and barring a dovish(ly perceived) surprise, it looks ready to give up a portion of recent gains. All eyes on long-term Treasuries remains the battle cry.

Related: Gold and Stock Bulls Are Getting Ready