Bullish run in stocks is on, driven by tech gains and value not yielding an inch. A rare constellation given the the long-dated Treasuries performance especially – as if the narratives were flipped, and value „could“ move up on rising yields. Well, liquidity and bets on the stocks benefiting from the coming infrastructure bill.

Any way you look at it, the market breadth is positive and ready to support the coming upswing continuation, even though I look for a largely sideways day in stocks on Tuesday given the aptly called fireworks to happen yesterday. Sizable long profits in stock market trades #6 and #7 have been taken off the table – 149 points in my Standard money managements, and 145 points in the Advanced money management that comes on top.

Both the VIX and put/call ratio are at extended levels – the first below 18 (formerly unimaginable to stock market non-bulls), the second approaching local lows again. As I have written yesterday:

(…) Throughout the markets, risk-on has been making a return as long-dated Treasury yields retreated, dollar fell and commodities continue their bullish flag formation. As I have tweeted on Thursday, it were the investment grade corporate bonds that signalled the turnaround in yields spreading to TLT next. Given such a constellation, the dollar‘s appeal is taking a dive as the bond market gets its reprieve. When nominal yields retreat while inflation (and inflation expectations) keep rising, real rates decline, and that leads to dollar‘s decline.

It‘s the (extra Archegos related?) liquidity that has helped to erase quite steeper intraday decline in the long-dated Treasuries (TLT ETF) but the dollar took it on the chin. Quoting my yesterday‘s dollar observations:

(…) As I have tweeted on Thursday, it were the investment grade corporate bonds that signalled the turnaround in yields spreading to TLT next. Given such a constellation, the dollar‘s appeal is taking a dive as the bond market gets its reprieve. When nominal yields retreat while inflation (and inflation expectations) keep rising, real rates decline, and that leads to dollar‘s decline.

The Fed thus far quite succeeded in passing the inflation threat off as transitory, but the rebalancing into a higher inflation envrionment is underway – just look at the bullish consolidation across many commodities.

Apart from oil, there have been quite a few commodity moves up yesterday – copper leading the rebound out of its sidewayspattern, lumber reaching for new highs, agrifoods far from breaking below consolidation lows. These are the pockets of strength as the $CRB index moved down yesterday.

Not the case of precious metals, if a joint view is taken. The rebound off the double bottom goes on, miners are in the pool position (senior ones, that is), and silver isn‘t reaching for the stars yet. 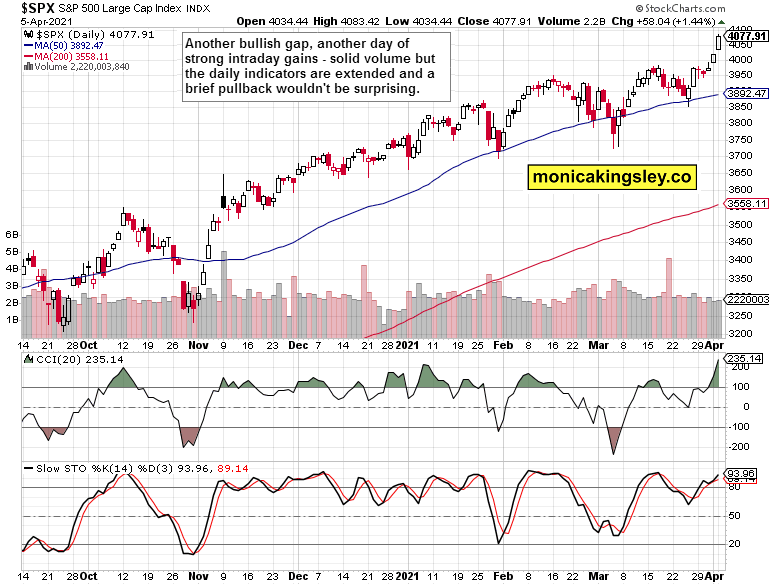 Quite an overshoot above the mid-Feb and mid-Mar highs, daily indicators are quite extended, and sideways trading today would be a bullish achievement. The upswing continuation next isn‘t in jeopardy in the least though. 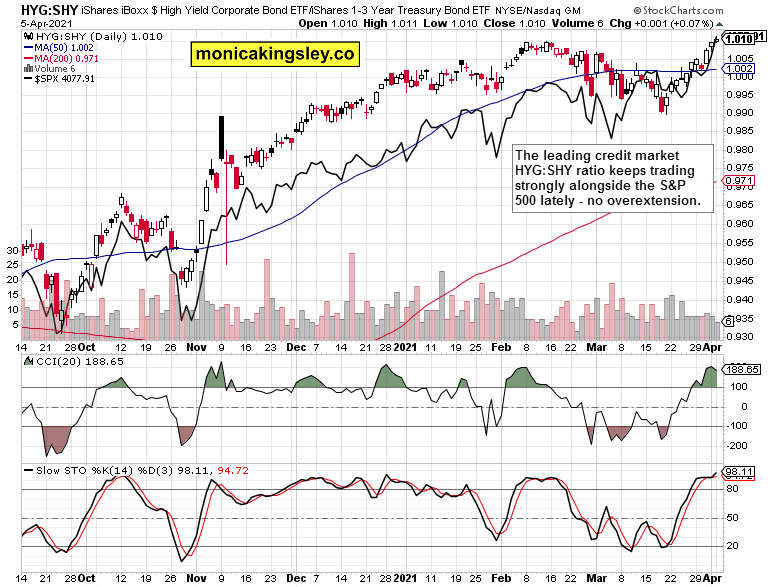 The high yield corporate bonds to short-dated Treasuries (HYG:SHY) ratio is trading in lockstep with the stock market upswing, sending no warning signs.

Tech (XLK ETF) rose strongly, and financials (XLF) as one of the value stocks (VTV ETF) bellwethers moved higher regardless of the intraday turn in TLT, which was however embraced by defensives such as utilities (XLU ETF). Quite good market breadth still. 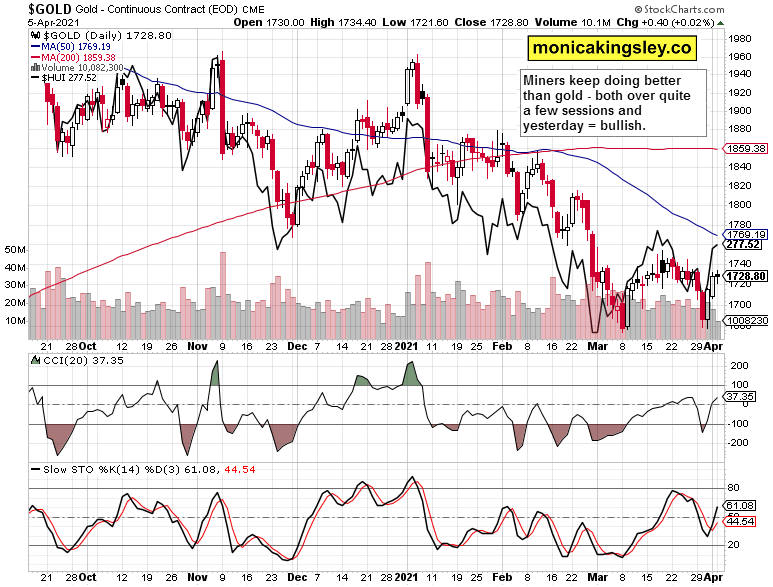 Gold not moving much while miners rose still, which is bullish for the full precious metals sector – the upswing simply continues, and as each of the resistances ($1,760s being the next one) is cleared, the odds of no retest of the second bottom rise. Needless to say, seeing gold and miners roll over from here, wouldn‘t be a bullish development at all. 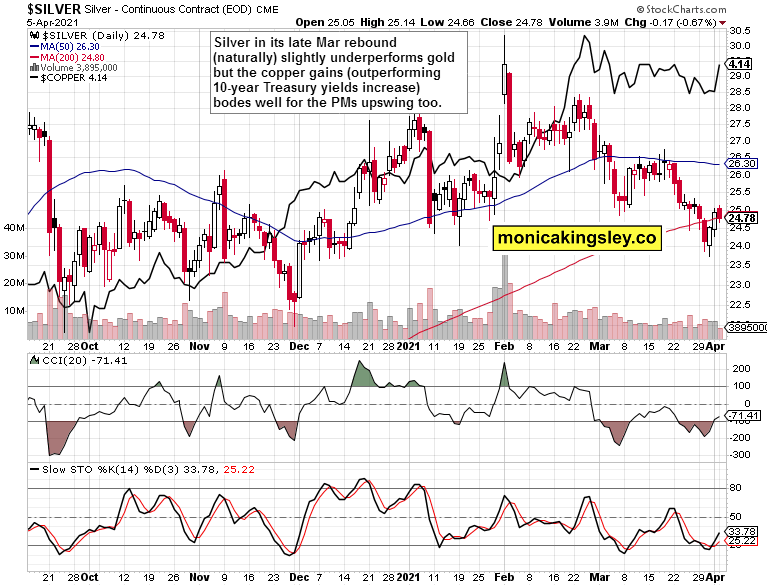 Silver didn‘t rise yesterday, which is of little consequence though, as the white metal is famed for moving in bursts at times. Given the copper performance, especially in the face of barely budging Treasury yields, both precious metals stand a good chance of rising today. The degree of miners‘ outperformance would provide further clues.

S&P 500 run above 4,070 is likely to be consolidated but I‘m not looking for a sharp correction starting here in the least. Tech could face short-term headwinds now given its upcoming resistance test, but that‘s about it.

Precious metals rebound goes on, with the miners still outperforming. Copper though appears pointing the way higher now too as the approaching upleg in commodities and precious metals in response to inflation running hotter and hotter, gains traction.