Nasdaq Hit Yet Another Record Close: Too Good to Be True?

The major indices closed mixed on Wednesday (Dec. 16), as the Nasdaq hit yet another record close amidst stimulus optimism and the Fed’s dovish tone.

The overwhelming majority of market strategists are bullish on equities for 2021- despite near-term risks. Outside of the pandemic raging to out of control levels, another near-term risk that has been largely overlooked is the Senate runoff election in Georgia. Investors have largely already priced in a divided government - however, if Republicans end up losing both seats in Georgia, this could potentially upend everything.

According to Jimmy Lee, CEO of the Wealth Consulting Group ,

Meanwhile, progress on the stimulus package appears to be more optimistic than many expected in the near-term.

“The odds of a fiscal deal before year’s end have been improving,” Goldman Sachs economists led by Jan Hatzius wrote in a note Tuesday (Dec. 15). “While we had expected a smaller package to pass now with a larger package waiting until early 2021, it appears increasingly likely that most of this could pass this week.”

While markets for the rest of 2020 (and perhaps early 2021), will wrestle with the negative reality on the ground and optimism for an economic rebound, the general consensus appears to be looking past the short-term painful realities, and focusing more on the longer-term - a world where COVID-19 is expected to be a thing of the past and we are back to normal.

In the short-term, there will be some optimistic and pessimistic days. On other days, such as Wednesday (Dec. 16) (and in my opinion this will be most trading days), markets will trade largely mixed, sideways, and reflect uncertainty. Therefore, it is truly hard to say with conviction what will happen with markets in the next 1-3 months. However, if a stimulus deal passes within the next week, it could mean very good things for short-term market gains.

In the mid-term and long-term, there is certainly a light at the end of the tunnel. Once this pandemic is finally brought under control and vaccines are mass deployed to the general public, volatility will stabilize, and optimism and relief will permeate the markets. Stocks especially dependent on a rapid recovery and reopening such as small-caps should thrive.

Due to this tug of war between sentiments, it is truly hard to say with any degree of certainty whether another crash or bear market will come.

Nasdaq Hits Another Record Close - Too Good to Be True? 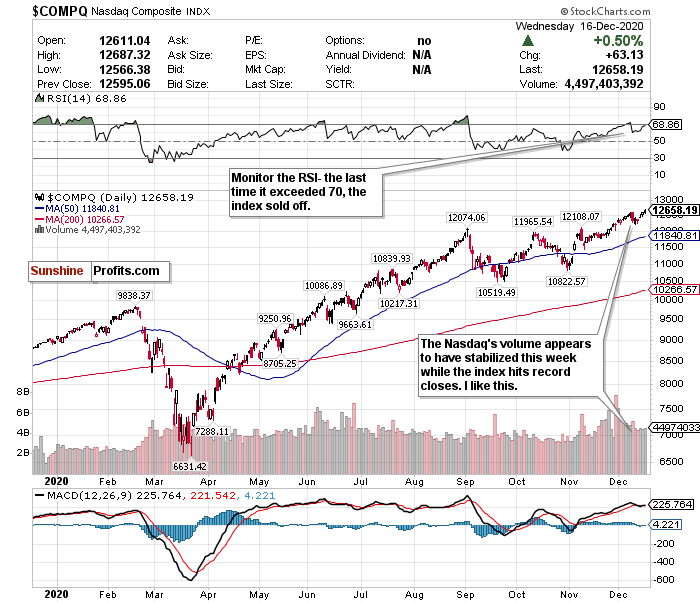 Is the Nasdaq’s performance since its sharp sell-off last Wednesday (Dec. 9) too good to be true? Truthfully, I don’t know. But it’s very possible - especially if shut down measurements become harsher and stricter and investors return to the “stay-at-home” trade that led markets from April through the end of October.

Additionally, I still have many concerns about tech valuations and their astoundingly inflated levels. Last week’s IPOs of DoorDash (DASH) and AirBnB (ABNB) reflect this and invoke traumatic memories of the dotcom bubble era. I believe that more pullbacks along the lines of last Wednesday (Dec. 9) could inevitably come in the short-term. Frankly, it would make me feel far more confident about initiating tech positions as well for the long-term.

Pay close attention to the RSI. While an overbought RSI does not automatically mean a trend reversal, I called keeping a very close eye on this for the Nasdaq. Last Wednesday’s (Dec. 9th) Nasdaq pullback after it exceeded a 70 RSI reflects that.

The Nasdaq has sharply rallied in the week since then. But its RSI is nearly 69. Monitor this . If the index goes on another bull-run and hits more record closes, it could surely exceed an RSI of 70 by the end of market close on Thursday (Dec. 17). I did not make a conviction call last week but I will now- if the RSI exceeds 70 this time, take profits- but don’t fully exit .

One thing I do like is how stable the volume has been this week and since the sharp sell-off last week. Stable volume is a good thing, especially if one is concerned about volatility. Low volume, especially a declining trend, means that there are fewer shares trading. Lower volume also means less liquidity across the index, and an increase in stock price volatility.

On pessimistic days, having NASDAQ exposure is crucial because of all the “stay-at-home” trade. However, positive vaccine-related news always induces the risk of downward pressure on tech names - both on and off the NASDAQ. What concerns me most are sharp sell-offs due to overheating and mania. Don’t ever let anyone tell you “this time is different” if fears of the dot-com bubble are discussed. History repeats itself, especially in markets.

It is very hard to say with conviction to sell your tech shares though. However, as I said before - if the RSI exceeds 70 again - consider selling some shares and taking profits. For now, however, the NASDAQ stays a HOLD .