Is the Market Hanging on by a Thread?

S&P 500 bulls again missed the opportunity, and credit markets likewise. Not even the virtual certainty of only 25bp hike in Mar is providing much relief to the credit markets. Given that the real economy is considerably slowing down and that recession looks arriving before Q2 ends, the markets continue forcing higher rates (reflecting inflation). In a risk-on environment, value and cyclicals such as financials would be reacting positively, but that‘s not the case right now.

At the same time, equal weighted S&P 500 (that‘s RSP) hasn‘t yet broken below its horizontal support above $145, meaning its posture isn‘t as bad as in the S&P 500. Should it however give, we‘re going considerably below 4,000. That‘s why today‘s article is titled hanging by a thread.

Precious metals and commodities continue consolidating, and the least volatile appreciation opportunity presents the red metal. And it‘s not only about copper – crude oil market is going through supply realignment, and demand is not yet being destroyed on a massive scale. Coupled with the long-term underinvestment in exploration and drilling (US is no longer such a key producer as was the case in 2019), crude oil prices would continue rising on fundamentals, meaning the appreciation pace of Feb-Mar would slow down. Precious metals would have it easy next as the Fed is bound to be forced to make a U-turn in this very short tightening cycle (they didn‘t get far at all, and inflation expectations have in my view become unanchored already). 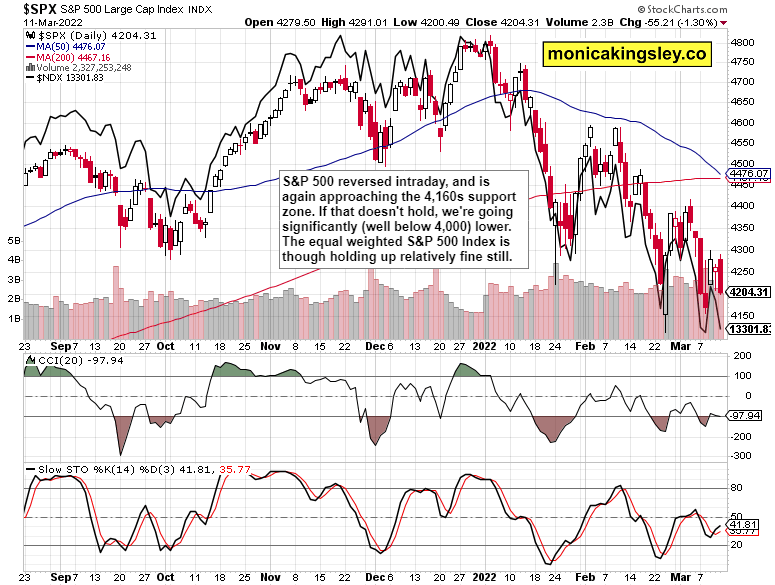 S&P 500 bears won the day, and Nasdaq remains in a sorry state. 4,160s are the line in the sand, breaking which would accelerate the downswing. Inflation is cutting into the earnings, and stocks aren‘t going to like the coming Fed‘s message.

HYG didn‘t keep at least stable – the pressure in the credit markets is ongoing, and the stock market bulls don‘t have much to rejoice over here.

Precious metals downswings are being bought, and are shallow. The sellers are running out of steam, and the opportunity to go somewhat higher next, is approaching. 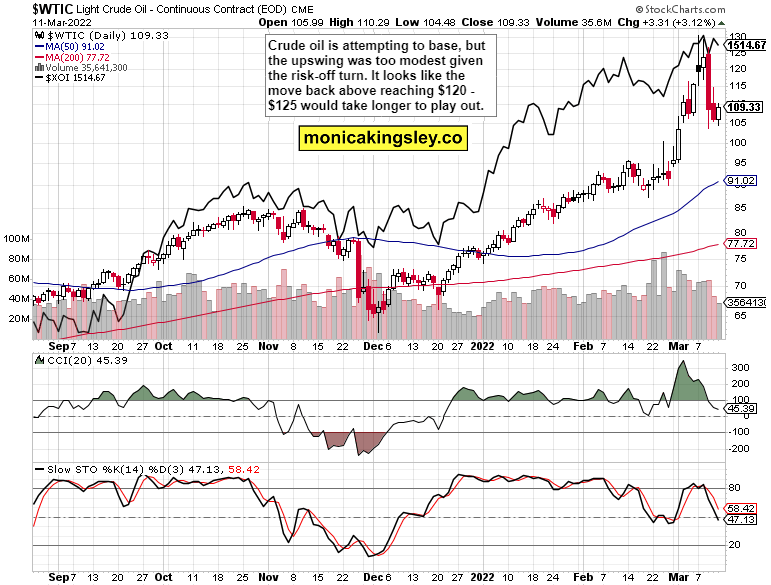 Crude oil is stabilizing, but it may take some time before the upswing continues with renewed vigor. As for modest extension of gains, we won‘t be disappointed. 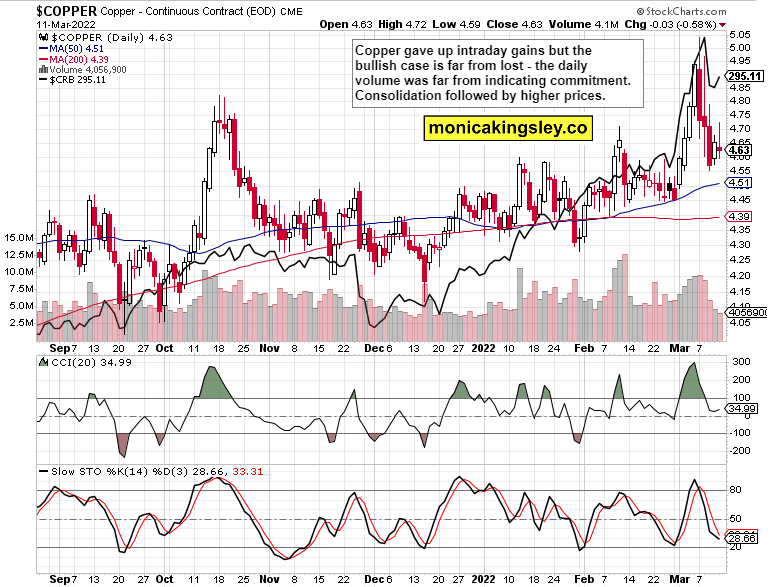 Copper had one more day of fake weakness, but the lost gains of Friday would be made up for next – and given no speculative fever here to speak of, it would have as good lasting power as precious metals. 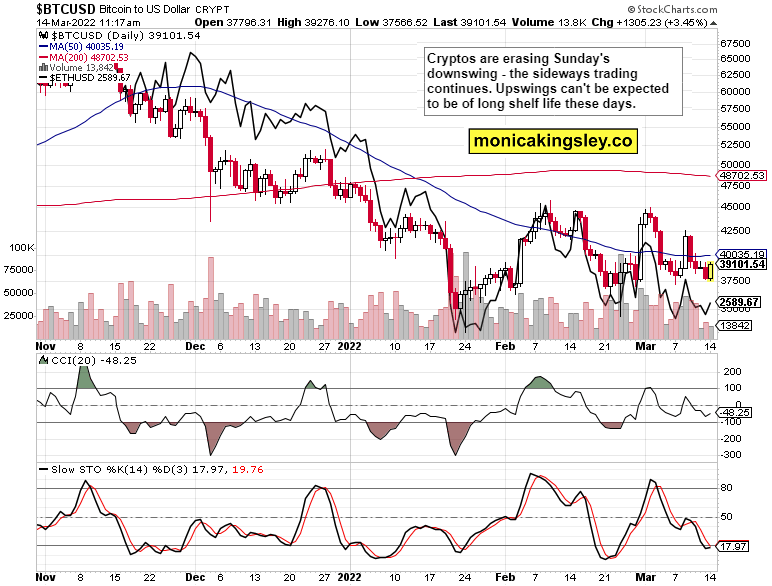 Cryptos remain undecided, but indicate a little breathing room, at least for today. Still, I wouldn‘t call it as risk-on constellation throughout the markets.

S&P 500 is getting in a precarious position, but the internals aren‘t (yet) a screaming sell. Credit markets continue leading lower, and the risk-off positioning is impossible to miss. Not even financials are able to take the cue, and rise. It‘s that the rise in yields mirrors the ingrained inflation, and just how entrenched it‘s becoming. No surprise if you were listening to me one year ago – the Fed‘s manouevering room got progressively smaller, and the table is set for the 2H 2022 inflation respite (think 5-6% year end on account of recessionary undercurrents) to be superseded with even higher inflation in 2023, because the Fed would be forced later this year to turn back to easing. Long live the precious metals and commodities super bulls!

Related: Is Yesterday’s SPX Reversal To Be Trusted?