The alarm has gone off. But will it be a dip, a crash or a false alarm?

These days, the market tide is changing fast. So, I won’t waste any time. Here’s what I see:

Here’s what that chart looks like. It shows weekly prices for the S&P 500 over the past 12 months. This is one of many angles I examine regularly. But this one should help simplify the message. 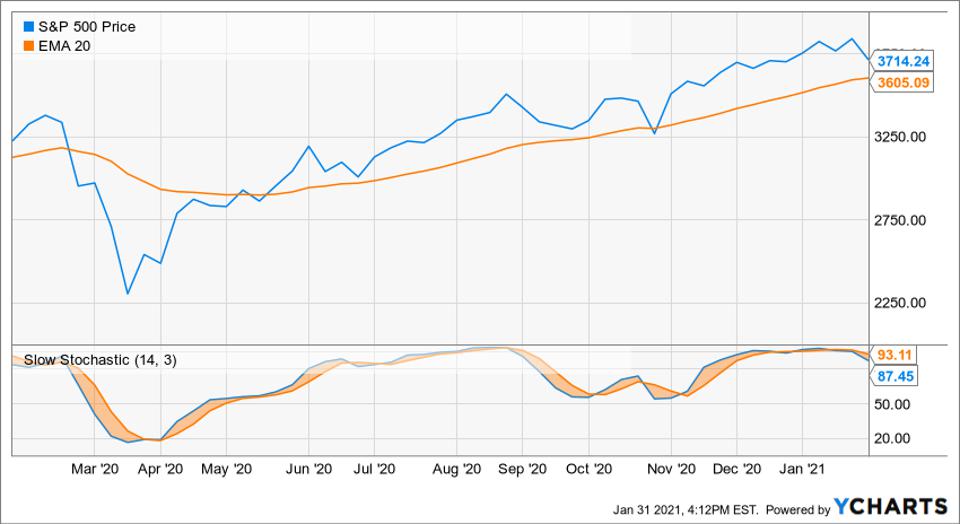 The upper part of the chart shows the price of the S&P 500 (blue line) and its short-term momentum trend in orange (20-day Exponential Moving Average, or EMA). That will be one of the “lines in the sand” if this market falls hard, or even just dips a bit.

The difference between what happened last year around this time, and the twin minor pullbacks in September and October is that the 20-day (orange line) was not crossed substantially during the latter periods. Again, none of this is used in isolation by us technicians. But it is part of the body of evidence, so to speak.

The more interesting “action” is in the bottom part of the chart. This is one of many “oscillators” (Slow Stochastic) we might use to answer the question: “is this a fakeout or a real breakdown?” The difference is perhaps a pullback of 5-6% from the recent highs, as was the case during the latter half of last year, or an emotionally-charged decline of 20-35%, which we saw during the first quarter of last year, and during December of 2018.

The bottom line to me is that this looks like a bigger threat than in September and October. Too much has to go right at this point in the cycle to bail out the excessive risk-taking that has now overflowed in the form of s0-called meme trading, SPACs, margin loans, low interest rates and the like.

The optimist in you might be thinking, “but these declines always happen quickly, they feel bad, but then the market bounces right back. That has absolutely been the case each time since 2008.

However, what we don’t know as investors is whether this is the time in the long stock market cycle where there are no more emergency landings, so to speak. The Fed can pump more money. Congress can pass a stimulus bill. The recent animal spirits can continue for several more months, or even years.

Don’t guess! Plan and position instead.

This is not a guessing game. It is time to consider 2 things:

If this time is different, like in 2000 and 2008, the 2 things I suggest any retired, pre-retired or otherwise moderate or conservative risk investor do are as valuable as at any time in my career. Specifically, learn to hedge against disaster, and understand the potential benefits of tactical investing. I have described both in some detail in past articles.

Because, in a market that has become too much like a casino and less like the investing world we knew, you either adapt, or take your chances. The charts are just one of many indicators I see that the latter move (taking your chances) is not likely to be a satisfying one.

Related: How to Explain Stock Market Bubbles to Your Clients