When it comes to the domestic vs. international equities debate, advisors know there's been no contest and the dominance exerted by U.S. stocks is an ongoing theme.

Zeroing in on a somewhat recent though still lengthy time horizon, the S&P 500 is up 81.2% over the past three years while the MSCI EAFE and MSCI Emerging Markets indexes are higher by 40.5% and 39.2%, respectively, over that span. In other words, the combined returns of those international benchmarks don't exceed what the S&P 500 did on its own.

Still, that doesn't make up for lackluster returns. On the other hand, there are diversification benefits to owning some international equities or funds and, these days, investors are significantly under-allocated to international stocks, both developed and emerging. That lack of ownership could be a sign of upside ahead, but that remains to be seen.

Conversation Points for Getting Rid Of Home Bias

The level to which investors, even professionals, and supposedly global index funds and exchange traded funds are underweight foreign stocks is simply staggering.

“As of Oct. 29, 2021, the FTSE All-World Index had a 59% weighting in U.S. stocks and 41% in non-U.S. Stocks,” according to Morningstar. “In 2019, FTSE Russell released a research paper on home bias, showing that U.S. pensions were overweight domestic stocks by 10 percentage points. According to Morningstar data as of Sept. 30, 2021, including mutual funds and exchange-traded funds, there was $12.5 trillion in U.S. equity funds and $4.2 trillion in international-stock funds--meaning a nearly uncanny 75% and 25% home to abroad split.” 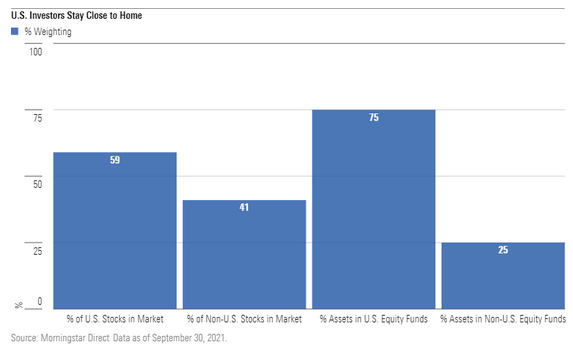 Advisors can tell clients to take heart because their counterparts in other developed markets, such as Japan and the U.K., display even worse domestic bias than is seen in the U.S. Additionally, investors in the states have some “excuses” beyond returns for ignoring international equities. In these cases, it's incumbent upon advisors to hold clients' hands a little bit.

How to Eliminate the Bias

Helping clients get over home country bias isn't a difficult task for advisors because much of the bias is rooted in superficial factors, such as familiarity with domestic stocks/lack of knowledge about international fare and, believe it or not, patriotism.

“Home bias doesn't typically start with rational, economic explanations. More often it comes from national pride and investors' desire to 'invest in what they know,” concludes Morningstar. “Patriotism and familiarity are fine, but they're not a strong foundation for investing success. Diversification, on the other hand, is a proven way to improve investment returns and reduce risk. Investing abroad increases diversification; home bias, by default, limits it.”

Those are exactly the types of issues advisors are suited to help clients work through and when that's accomplished, doors can open to better portfolio construction.