Put the Top Down to Convertibles Upside as Rates Rise

If there's one thing advisors are tired of hearing about this year, it's the impact – mostly unpleasant – that rising 10-year Treasury yields are having on fixed income portfolios.

Undoubtedly, many advisors are really, really tired of contending with this situation and we're only four months into 2021. The widely followed Bloomberg Barclays US Aggregate Bond Index is down 2.72% year-to-date as of April 28. That's making life hard on advisors and clients engaged in standard  60/40 portfolios.

As bad as that all sounds, hope isn't lost in the fixed income space. Advisors merely need to know where to turn. With rates rising, convertible bonds aren't just a starting point. They're a destination.  The proof is in the pudding.

History Is On Convertibles' Side

Convertibles don't command attention or scrutiny on par with traditional corporate debt, be it investment-grade or high-yield, but this is still a $550 billion corner of the fixed income market (as of January 2021).

Advisors looking for an effective way of explaining convertibles to clients highlight the hybrid nature of these bonds – they've got equity and fixed income traits – and lean on the name. Put simply, convertibles are bonds that can later be converted by the bondholder into share of the issuer's equity.  On that note, individual convertible issues are best left to pros while advisors can allocate to this asset class on clients' behalves via active funds or the aforementioned CWB.

Due to convertibles being backed by stock, these bonds take on equity traits and are often correlated to the issuer's shares. That underscores some of the risk/reward scenario here.

“Convertible securities are subject to the risks associated with both fixed-income securities and common stocks,” according to Invesco. “To the extent that a convertible security’s investment value is greater than its conversion value, its price will be likely to increase when interest rates fall and decrease when interest rates rise, as with a fixed income security. If the conversion value exceeds the investment value, the price of the convertible security will tend to fluctuate directly with the price of the underlying equity security.”

That's all fine and dandy, but advisors are obviously looking for rising rates protection here and now. As the chart below indicates, convertibles offer that. 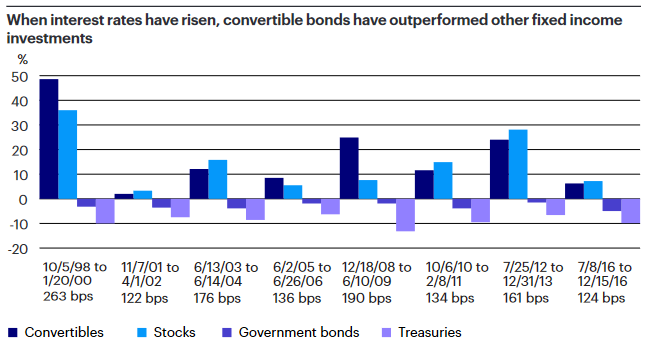 Admittedly, that chart is dated, only running through 2016, but as CWB's year-to-date performance confirms, convertibles are living up to past precedent of thriving as Treasury yields climb.

Thus far, I've framed convertibles as an alternative to Treasuries as rates rise, but the former is also worth considering as replacement investment-grade corporate bonds.

That's one point in convertibles' favor. Another is the group's utility as an interest rate normalization strategy.

“Due to their hybrid nature, convertibles have the potential to generate significant returns in an environment where interest rates ‘normalise,'” according to RBC. “The interaction between the equity and credit elements has historically allowed convertibles to post positive returns in years when government bonds have experienced losses.”

In summation, equities and economic growth look strong and 10-year Treasuries have a runway to 2%, so say the experts. It's practically a perfect storm for convertibles.

With Value in Style Again, Advisors Should Size Up Shareholder Yield

It's Not Too Late to Bank on Bank Stocks

Put Chips on the Table to Talk Tech with Clients