As is being widely documented this year, sector exchange traded funds are enjoying plenty of adulation and inflows these days, but performance is not universally exceptional across the 11 GICS sectors.

Owing to rising 10-year Treasury yields, the financial services sector is awakening from a lengthy slumber this year, living up to its reputation as one of the groups most positively correlated to rising interest rates. The proof is in the pudding as the S&P 500 Financial Services Index is higher by almost 27% year-to-date while the S&P 500 is up “just” 10.18%.

Some market observers see a good news/bad news scenario emerging. The bad news is that real yields haven't moved all that much, indicating 10-year yields may have more room to the upside. The good news is, as noted above, that such a scenario would benefit bank stocks.

“The potential for another surge in interest rates probably leads the list of investor anxieties. Those looking for higher rates can point to the fact that real yields remain exceptionally low, even by the diminished standards of the last decade,” according to BlackRock research. “At roughly -0.80% 10-year real yields are about where they were six months ago. This is hard to reconcile with the events of the past six months: roughly $3 trillion of fiscal stimulus, the potential for another $2 trillion of infrastructure spending, a successful vaccine rollout, a rapidly healing labor market and U.S. households sitting on a couple trillion dollars of excess savings.”

Market participants mulling financial services exposure last year, prior to 10-year yields materially moving higher, were in essence making a valuation call and not much else.

Bank stocks were inexpensive, the quintessential value destination and not much else – particularly with the Federal Reserve putting a hold on dividend growth plans – against the backdrop of low interest rates and depressed net interest margins (NIMs). Interestingly, the recent run higher by banking equities isn't making them richly valued. In fact, data indicate the group is still inexpensive.

“Today, despite the likelihood for higher rates, financials remain one of the cheapest sectors globally,” notes BlackRock. “This is also true in the United States. The U.S. financial sector is trading at roughly 1.5x price-to-book (P/B). Not only is this cheap relative to the sector’s history, valuations look particularly low when compared to the broader market. U.S. financials are trading at just 35% of the P/B of the S&P 500.” 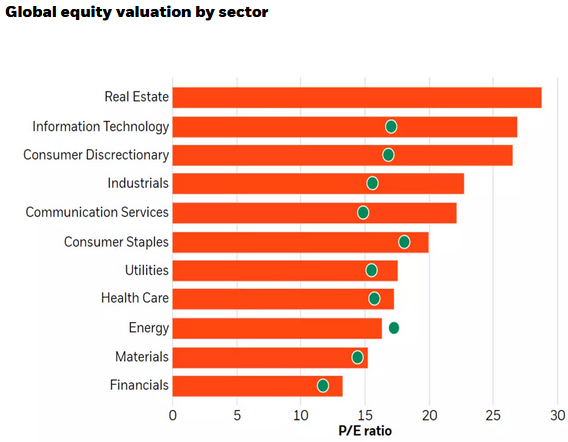 Those valuations can and likely should normalize as interest rates climb. Not surprisingly, bank valuations are intimately tied to 10-year yields. BlackRock says that, over the past decade, 10-year yields “explained approximately 70% of the relative valuation of U.S. banks.”

Adding to the case for bank equities is that loan delinquencies are surprisingly low following the coronvirus recession and still high unemployment.

“In the years leading up to the coronavirus crisis, the rate of new consumer loan delinquencies remained around historical lows, largely because of the exceptionally strong job market,” according to Moody's Investors Service. “Delinquencies typically rise following a spike in unemployment, such as that at the onset of the pandemic, because of declining personal income. But the rate of new delinquencies declined materially in the first quarter of 2021 to just 2.13% from 4.61% a year earlier because of exceptional amounts of US government fiscal stimulus, accommodative monetary policy, payment and eviction moratoriums, and now a strengthening job market.”

Combine that with the rebounding economy and the likelihood that dividends will rise in the back of this year, and there remains a compelling case for bank equity exposure even if 10-year yields normalize.

Sell In May, Go Away Isn't the Advice it Used to Be

The Right Way to Revisit Retail

Growth at a Reasonable Price May Be Overrated