For what now feels like an eternity, advisors and their clients are hearing about the efficacy of the FAANG trade – Facebook (NASDAQ:FB), Amazon (NASDAQ:AMZN), Apple (NASDAQ:AAPL), Netflix (NASDAQ:NFLX) and Google parent Alphabet (NASDAQ:GOOG).

Add Microsoft (NASDAQ:MSFT), Tesla (NASDAQ:MSFT) and a few others to the mix and it's clear the mega-cap tech trade has been a winner. The long-running out-performance of the tech-heavy Nasdaq-100 Index (NDX) relative to other large-cap domestic benchmarks confirms as much.

That doesn't mean the portfolio diversification benefits of mid- and small-cap stocks should be eschewed in the name of potentially excessive allocations to mega-cap growth and tech fare. It's hard to take the publicity mantle from mega-cap tech, but these days, advisors are hearing plenty about smaller stocks thanks to what's seen as an accomodative political atmosphere.

Following the results of the 2020 presidential election and the Georgia Senate runoff races last month, Democrats control the White House and both chambers of Congress. Market observers are wagering this scenario will benefit smaller stocks, which are more domestically focused. Prevailing wisdom is that rampant fiscal stimulus will offset any tax increases that may be passed, providing reasons to revisit mid- and small-cap equities.

For advisors considering allocations to smaller stocks this year, the S&P MidCap 400 and S&P SmallCap 600 indexes are two of the most widely followed benchmarks tracking these asset classes and are accessible via an array of low-cost exchange traded funds and index funds.

Aside from the aforementioned political tailwinds, one of the primary reasons to to consider these small stock indexes is diversification. As in they have it at a time when the large-cap S&P 500 is increasingly concentrated in a tiny number of names.

Conversely, the top five holdings in the S&P SmallCap 600 combine for 5.30% of that index while the top quintet in the S&P MidCap 400 represents just 3.65% of that benchmark's roster.

“An important implication is that the S&P 400 and 600 index returns are less reliant on a handful of names, and may therefore be an effective tool for diversifying US equity exposure,” according to S&P Dow Jones.

We'll get a better read on the state of the U.S. economy Friday when the January jobs report is released. Suffice to say the world's largest economy is still grappling with the effects of the coronavirus pandemic, but as that negativity is shaken off and GDP growth steadies, the S&P MidCap 400 and S&P SmallCap 600 merit consideration by advisors.

“The S&P 400 and 600 have historically had a higher correlation to a number of economic indicators (GDP growth, investment and consumption growth),” notes S&P Dow Jones. “As the re-opening becomes more broad-based, if consistent with such higher correlations, these indexes may provide a higher beta, leading to out-performance versus the S&P 500.” 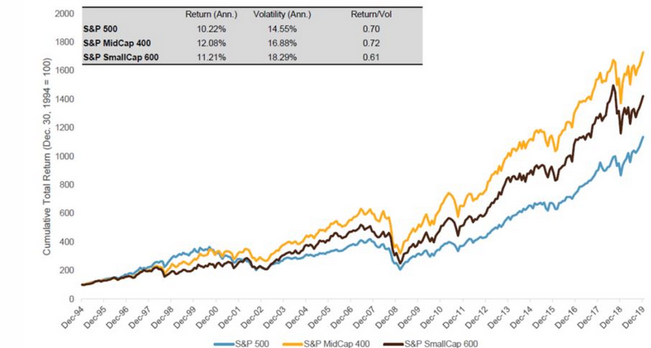