What Has Been Going on With Cryptocurrencies?

The recent price action in digital assets has caught the attention of investors and the business community alike. In response, some have suggested that owning Bitcoin is preferable to bonds, while others have called for a greater focus on the environmental impact of mining these assets. Regardless of one’s personal view, digital assets and cryptocurrencies are becoming an increasingly large part of the global financial system. As such, more and more investors are asking how they should think about them as both investments and currencies.

To start, cryptocurrencies are extremely volatile – Bitcoin hit an all-time of more than $63,000 per coin on April 15, 2021, before falling by nearly 45% to a level of around $35,000 just over a month later. However, this is just one example of how quickly things can change in the crypto market; as shown in the chart below, Bitcoin has seen extreme bouts of volatility over time, and in some cases took years to recover these losses. Furthermore, correlations between cryptocurrencies like Bitcoin and traditional assets like stocks and bonds are incredibly unstable, making it difficult to predict whether they will “zig” or “zag” during periods of stock or bond market stress.

Despite the volatility of these assets, there is tremendous value in the underlying technology. As we wrote at the end of last year, blockchain looks set to becoming an increasingly common way of processing transactions, and many developed market central banks are now actively discussing the idea of central bank digital currencies (CBDC). While the main difference between CBDC’s and assets like Bitcoin would be the centralized nature of the network (i.e. a digital dollar would still be backed by the Federal Reserve), there are other potential nuances as well. The Federal Reserve is in the process of conducting additional research on the topic, and a formal paper that dives deeply into the topic is expected over the summer.

At the same time, it is difficult to see how Bitcoin is a unit of account, medium of exchange, or store of value, further undermining the argument that it is a currency in the traditional sense. For example, Visa processes more than 3,000 transactions per second, while the Bitcoin network processes just more than three; taking this a step further, as the size of a block increases, transaction fees rise and processing times increases. Until this changes, the ability to widely transact using cryptocurrencies will remain limited – nobody wants to wait for a block to be mined just so they can get their morning cup of coffee.

A decision to allocate to digital assets and cryptocurrencies will depend on an investor’s risk tolerance – put differently, any investor in these assets needs to be prepared for the value to go to zero. As we noted in December, an investment in cryptocurrency might be appropriate for some, but for those who view it as a panacea in a world of uncertainty and historically low interest rates, a bit of caution may be warranted.

Volatility is nothing new in the crypto market 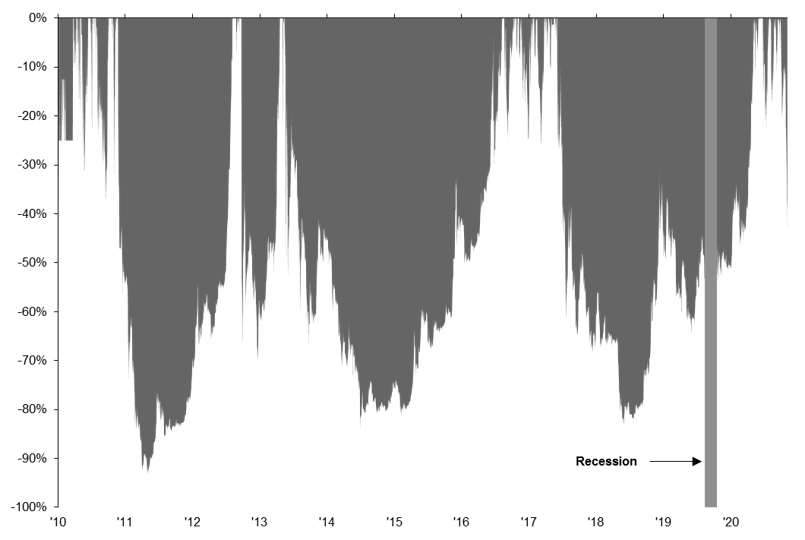 Related: Why Bitcoin Fell 40%, And What It Means