The Blockchain Revolution May Not Be Televised, But It's Happening

With any disruptive technology, there's an adoption curve and history is littered with examples of that curve being lengthy – sometimes measurable in decades.

Relevant to today's “satisfaction now” clients is that adoption of innovative technologies often rapidly speeds up before reaching maturity, providing investors ample opportunity to hop aboard trains that fast gaining speed. Blockchain, a concept clients are hearing more and more about due to bitcoin, is an example of this trend.

That rapid pace of blockchain adoption, which doesn't hinge on bitcoin or any other cryptocurrency for that matter, is many ways a relief because as Riley Rosenberger of Osprey Funds notes, some of history's most disruptive innovations took years to reach scale. As just one example, Rosenberger highlights Guttenberg's printing press, which appeared around 1440.

While bitcoin served to bring blockchain to the forefront of investable disruptive technology concepts, the fact is there are myriad usage cases and investment implications with blockchain.

“Blockchain has gone far beyond its beginnings in banking and cryptocurrency: Annual funding to blockchain companies, despite falling from 2018’s record high, more than doubled in 2020 compared to 2017. Annual spending on blockchain solutions will reach nearly $16 billion by 2023,” according to CB Insights.

Cementing the rapidly rising adoption curve and blockchain's investment credibility are its applications in industries ranging from agriculture to healthcare to financial services to entertainment to retail and even the public sector. It appears blockchain is at least meshing with if not exceeding prior adoption curves for new breakthrough technologies.

“Technology adoption curves are steepening as real-time communications and global travel become ubiquitous. In the US, 90% of households adopted the telephone in 80 years,” says Osprey's Rosenberger.

His point is clear and relevant: Adoption of cellular phones was far rapid than that of landlines and smart phones are being embraced more quickly than any other prior iteration of the telephone.

Clearly, the investable blockchain in fund form qualifies as thematic, but there are a growing number of ideas for investors to consider. Today, there are seven blockchain-oriented exchange traded funds on the market with several more in the filing stage.

While these funds probably won't be massive positions in any client's portfolio, these products check the boxes of delivering efficient disruptive tech exposure and some leverage to bitcoin and crypto without having to directly hold those assets. As the chart below indicates, those are compelling traits given where we are in the bitcoin adoption cycle. Just remind clients patience is a virtue. 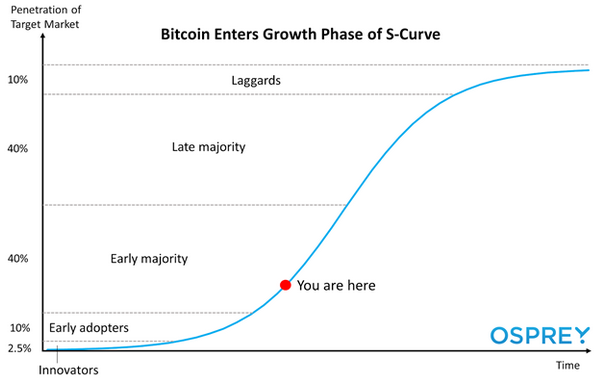 “We do know that over the past 5 years, the number of crypto users has increased 20 fold from 5 to 101 million,” says Rosenberger. “That’s a lot of people, but still less than 2% of the global population.

While we expect adoption to occur much faster than the printing press, it’s still going to take time.”

A Primer on Bitcoin Conversations

The Other Crypto Conversation Waiting for Advisors

Bitcoin Mythology Is Veritable Gold Mine for Advisors