Why Other Countries May Follow El Salvador in Adopting Bitcoin

El Salvador is the smallest country in Central America, smaller than the Commonwealth of Massachusetts, and yet it just did something very big. This week it became the world’s first country to adopt Bitcoin as legal tender, marking a huge turning point for the cryptocurrency.

It could also potentially be a turning point for El Salvador and its citizens, 70% of which are unbanked. Anyone with a cell phone can be his or her own bank when you add Bitcoin, and fortunately for El Salvador, mobile penetration is unusually high for such a low-income country.

Under the new law—which was proposed by President Nayib Bukele Saturday evening, near the end of the Bitcoin 2021 conference in Miami—the U.S. dollar will continue to be El Salvador’s currency, but all businesses will now have to accept payment in Bitcoin unless they lack the technology to do so.

A common refrain at Bitcoin 2021 was that Bitcoin “fixes everything.” Although no one had El Salvador in mind, they may as well have.

Besides acting as a store of value—a type of digital gold, as some have called it—Bitcoin exists entirely outside the traditional banking system. El Salvador’s central bank cannot “print” more Bitcoin; nor can its government stop a transaction from happening.

It’s easy to see why, then, some authoritarian governments have moved to ban or severely restrict Bitcoin, China chief among them.

It’s also easy to see why people in poorly managed countries have had little choice but to use Bitcoin to get by. Venezuela, for instance, has one of the highest Bitcoin adoption rates in the world because hyperinflation has destroyed its currency, the bolivar.

At Bitcoin 2021, someone hauled in a literal dumpster full of thousands of 50-bolivar notes, many of which ended up being scattered across the conference grounds like so much litter. It was jarring to see attendees completely ignore the paper money right under their feet as they walked from one panel to the next.

The point was well made: Cash is trash. If a substantial chunk of your household wealth is sitting in the bank, you’re taking on a huge risk.

You may think that hyperinflation and currency debasement are things that happen only in third-world countries, but there’s no reason why it couldn’t happen here in the U.S., however unlikely.

Since 1971, when President Richard Nixon officially killed the gold standard, the U.S. dollar has been an entirely free-floating fiat currency, backed by nothing. There’s no limit to how much money can be created. The same goes for nearly every other currency in the world.

I don’t think enough people appreciate the fact that this is a global monetary experiment never before seen in history. Every other attempt at using paper money in the past has ended in disaster.

Take a look at the chart below. Close to $5 trillion have been pumped into the U.S. economy since January 2020 in response to the pandemic. This represents nearly 25% of all U.S. dollars in circulation. In as little as a year and a half, the greenback has essentially lost a quarter of its value.

Money has also been created—and diluted—through central banks’ runaway bond purchase programs. As of the end of May, the four largest central banks held a staggering $29.3 trillion on their balance sheets.

To borrow the line from above, Bitcoin fixes this. Supply is capped at 21 million coins. Once the last Bitcoin is mined, in 2140, there can never be any more. No central banker or finance minister can flip a switch and dilute the supply by creating additional Bitcoins. Like any asset, Bitcoin has its own risks, but poor monetary policy is not among them.

I hope financial liberty for El Salvador’s 6.5 million residents was top of mind when President Bukele chose to pursue Bitcoin adoption. His administration has a history of corruption, and some Salvadorans allegedly wonder if the cryptocurrency will be used as just another tool for political gain and self-enrichment.

El Salvador may be the first to adopt Bitcoin, but I don’t believe for a second that it will be the last. Politicians in other Latin American countries, including Paraguay, Panama and Brazil, have already expressed support for making the crypto legal tender.

As for now, El Salvador is on a path to start mining its own Bitcoin. On Wednesday, President Bukele said he instructed the president of LaGeo, the country’s geothermal electrical company, to “put up a plan to offer facilities for Bitcoin mining with very cheap, 100% clean, 100% renewable, 0 emissions energy from our volcanos.” 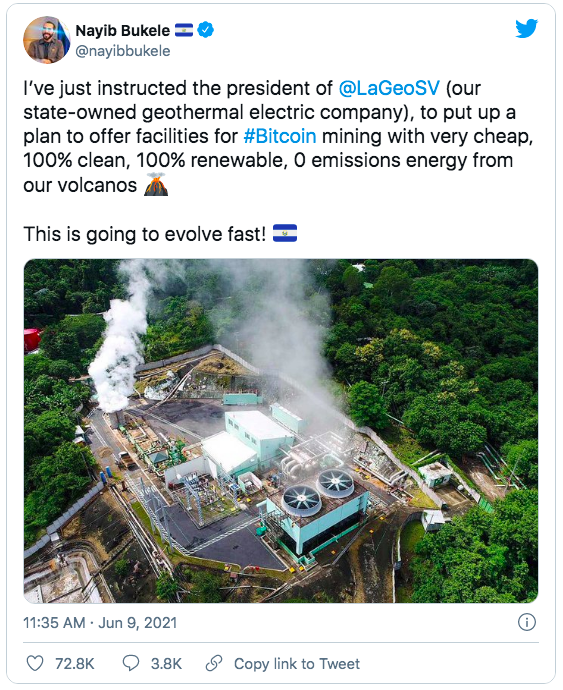 How cool is that? Volcano-powered Bitcoin.

It goes without saying that all eyes will be on El Salvador going forward. Many Bitcoiners no doubt hope to see some price appreciation as a result of President Bukele’s decision, but I’m more curious to see what Bitcoin can do for El Salvador’s economy.