Will Gold’s Next Decline Be Its Final One?

If gold’s recent rally is just a correction within a larger medium-term downswing, and the 2018 pattern repeats, this could mean the final plunge.

Gold continues to move just like it did at the beginning of this year, and – combined with the bottoming USDX – it heralds declines in the PMs.

I previously emphasized that despite jumping above the upper (red) border of the roughly one-and-a-half-month trading channel, the bearish implications of the yellow metal’s inability to close above its November 2020 low are more important - and this has remained the case. 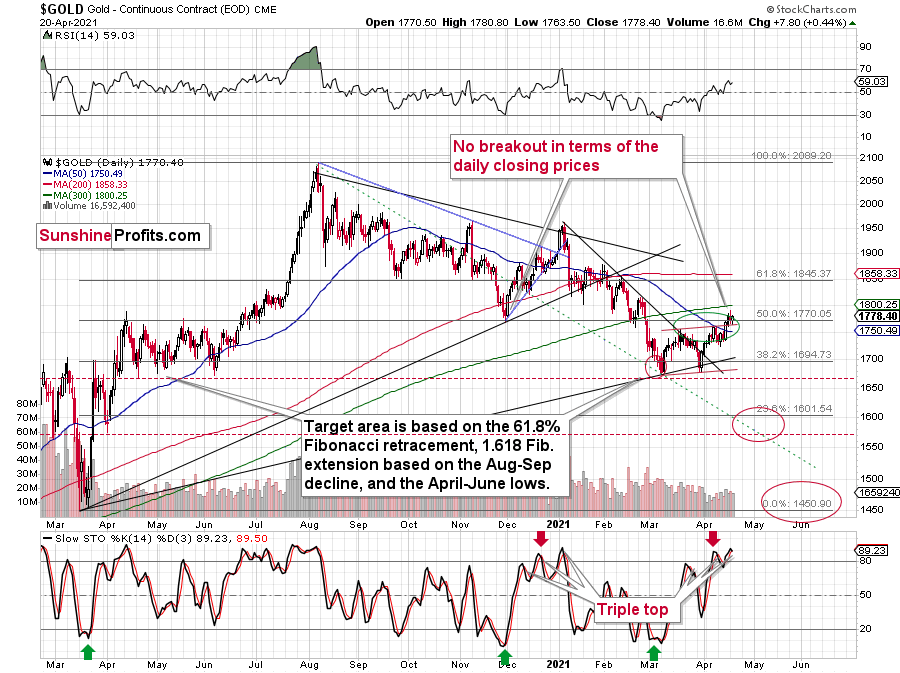 Despite a daily rally in gold, we haven’t seen a daily close above the lowest one of late November 2020. Consequently, the breakdown below this level was not invalidated and its bearish implications remain intact.

In addition, gold’s stochastic indicator is mirroring the behavior that we witnessed in early 2021. If you analyze the bottom area of the chart above, you can see that the indicator recorded three material moves higher (triple top) before gold eventually rolled over.

In particular, the first sell signal occurred slightly below the 80 level, the second was above it, and the same was the case with the third one.

The stochastic indicator has just moved to new highs, just like it did in early 2021, and it also flashed (so far tiny but still) a sell signal. Back in January, this action meant that the final top was in or about to be in (not more than a few sessions away). The implications here are definitely bearish. Especially given Monday’s session, when gold showed that it’s ready to slide even without the USD’s help.

Speaking of the USD Index, please note that it seems to have bottomed almost right at its 61.8% Fibonacci retracement level based on the previous 2021 rally. 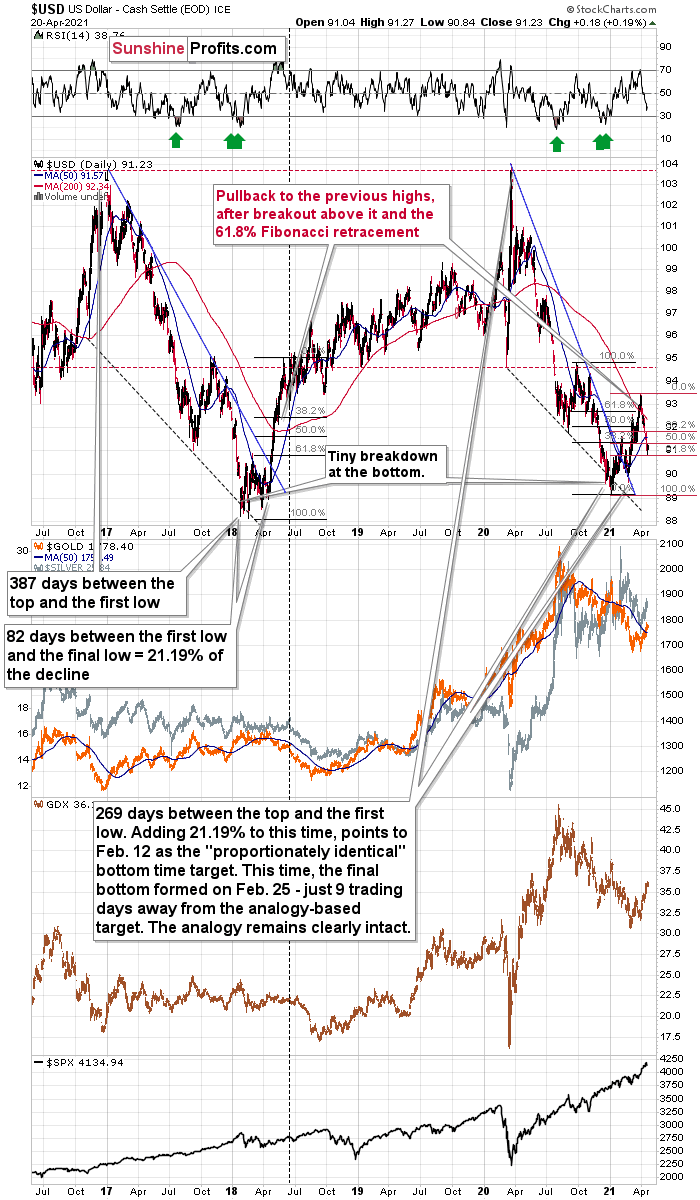 In addition, let’s keep in mind that the very bullish analogy to the 2018 rally remains intact. If you analyze the chart below, you can see that back in 2018, the USD Index rallied sharply and then corrected back to its previous highs. And in similar fashion, the current weakness is nearly identical.

The current correction is much bigger than what we saw in mid-April 2018, so it seems that what we see right now is more of an analogy to what we saw in June 2018. That was the first big correction after the breakout – above the 50-day moving average and the declining blue resistance line – that definitively ended the yearly decline.

I marked the situation from 2018 that seems similar to what we see right now with a dashed, horizontal line. Back in 2018, the pullback ended when the USD Index moved to its first Fibonacci classic retracement level (the 38.2% one). In case of the current rally, it seems that another classic retracement worked – the 61.8% one.

Right now, I’m writing that the recent rally was also fake (a correction within a medium-term decline) and – even more importantly – it seems likely that the next downswing could take place at a higher pace than what we saw so far this year. And – just as was the case in 2018 – this upcoming (fast) decline is likely to lead to the final bottom in the precious metals sector.