Several economic indicators have surprised us on the positive side. Nevertheless, the price of gold has rebounded.

Finally! The price of gold has been rising recently . As the chart below shows, the yellow metal rebounded from the late March bottom of $1,684 to above $1,770 on Friday (Mar. 16). This could be a promising start to the second quarter of 2021, which looks better than the first. 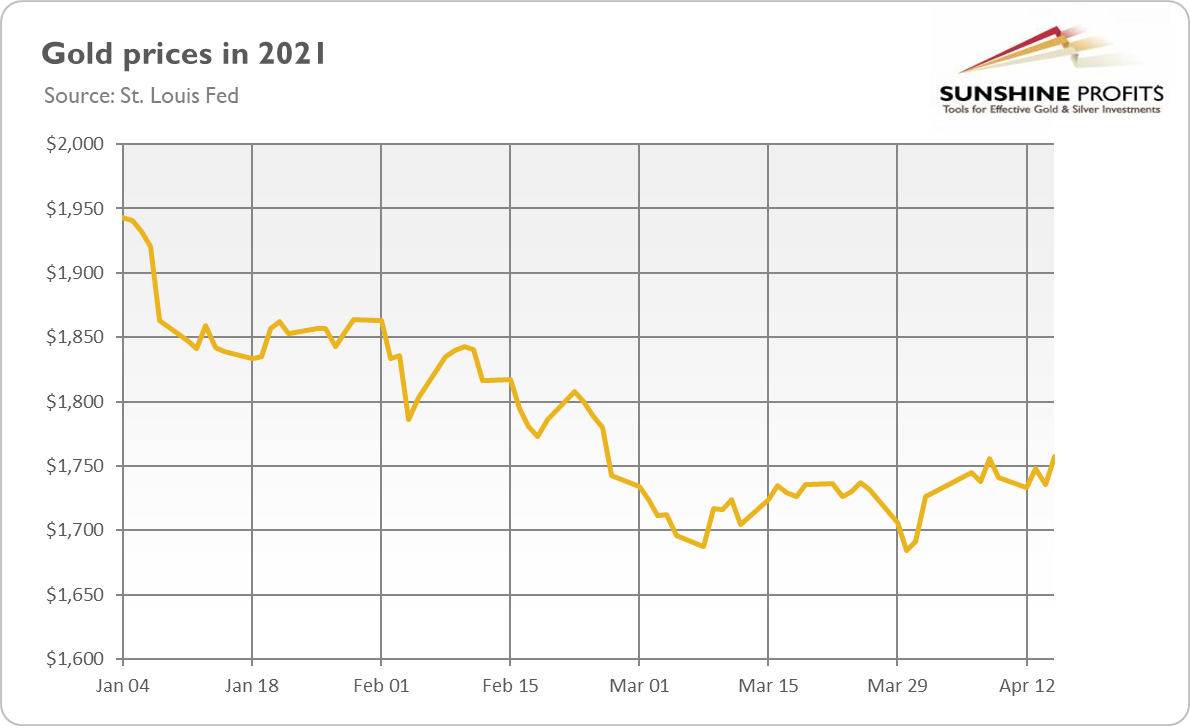 As you know, gold struggled at the beginning of the year, falling under strong downward pressure created by the improving risk appetite and rising bond yields . But the strength of these factors has begun to fade. You see, it seems that economic confidence has reached its maximum level, and it could be difficult for markets to become even more euphoric.

Please take a look at the chart below which shows the level of credit spreads – as you can see, they have fallen to very low levels, which implies that they won’t get much lower than they are right now. So, it appears that the next big move will rather be a rise in credit spreads or a decline in economic confidence. 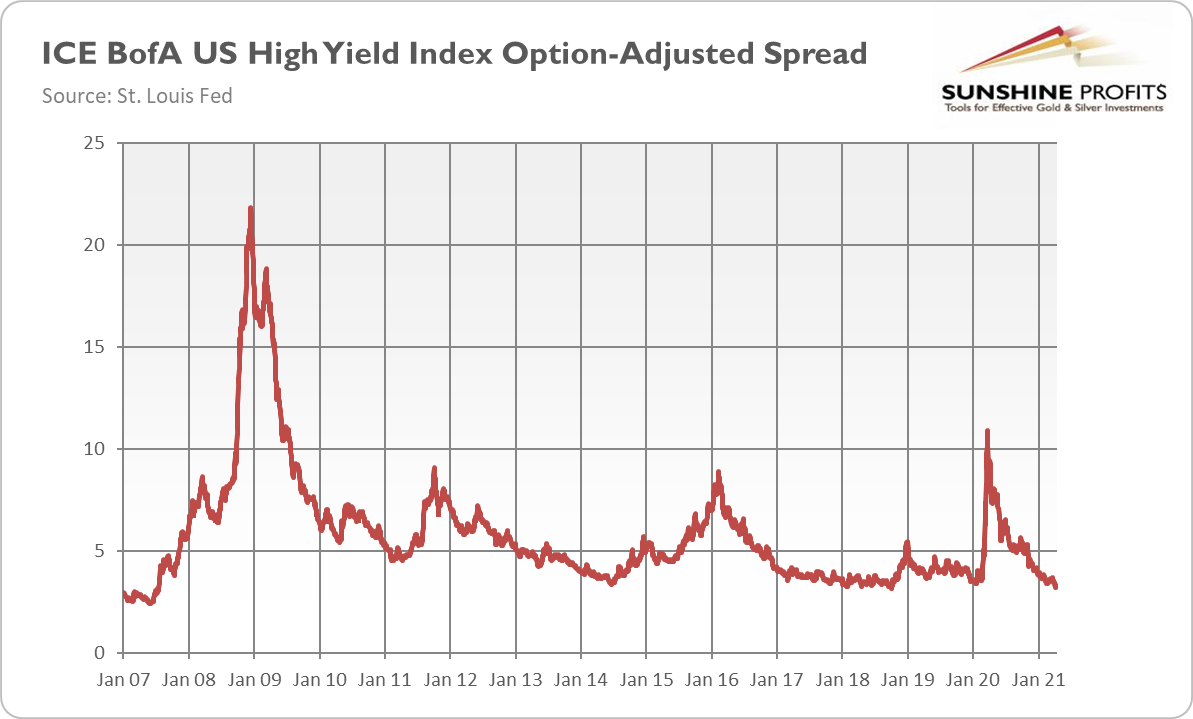 Second, it seems that the rally in bond yields has run out of fuel , at least for a while. The U.S. long-term real interest rates reached their peak of minus 0.56% on March 18 of this year. Since then, they are in a sideways or even downward trend, declining to almost -0.70% last week, as you can see in the chart below. 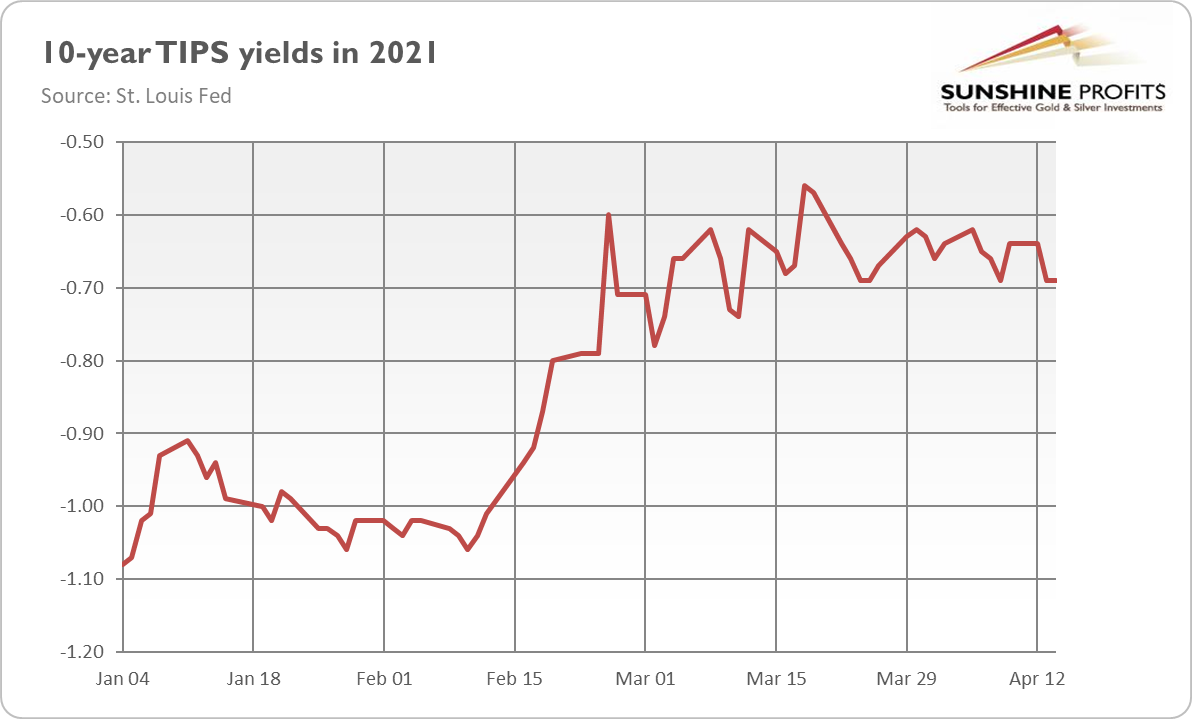 As I explained earlier several times, the markets didn’t buy the Fed’s story of allowing inflation to rise substantially without hiking interest rates for several weeks or even months. However, it seems that Powell and his colleagues have finally managed to convince investors that they are really serious about the new framework, which puts full employment over inflation.

Of course, there are also positive geopolitical factors contributing to the rebound in the gold prices . The tensions between the U.S. and China, as well as the U.S. and Russia, have been rising recently. However, it seems that the decline in bond yields allowed gold to catch its breath, and that the macroeconomic outlook – including the credit spreads, interest rates, inflation, monetary policy and fiscal policy – will remain the key driver of gold prices throughout the year.

What does all this mean for the price of the yellow metal? Well, the recent jump in the price of gold is encouraging. What is important here is that this rebound occurred amid the flood of positive economic data . For instance, the initial jobless claims have decreased to 576,000, a lower level than expected and the lowest since the pandemic started, as the chart below shows. 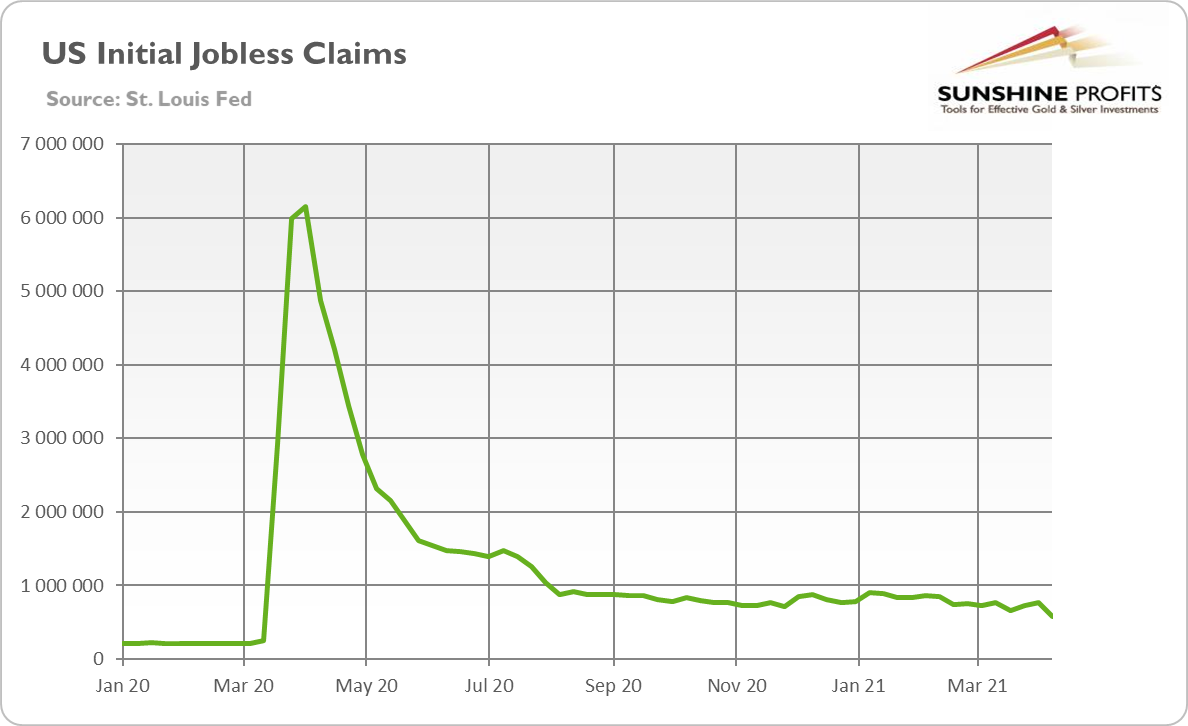 Additionally, retail sales surged 9.8% in March , following a 2.7% decline in February, while the Fed’s Beige Book reported that “national economic activity accelerated to a moderate pace from late February to early April”. Additionally, both the Philadelphia Fed manufacturing index and the Empire State manufacturing index surprised us on the a positive side.

The fact that gold held its gains and continued the rebound even after the publication of several positive economic reports is bullish . Of course, it might be simply the case that the reduction in the real interest rates simply outweighed other indicators, but it’s also possible that gold’s bears got tired.

Indeed, the sentiment was so negative in the gold market that it couldn’t get much worse than it already was. Gold shined brightly during the Great Lockdown and economic crisis . But now, when the economy is recovering, gold has become persona non grata . However, this might imply that we are either close to or we have already reached the bottom. Only time will tell, of course, but the macroeconomic outlook seems to be rather friendly for the price of gold, especially if the real interest rates stop rising or even start declining again.

Related: Gold: You Can Win a Battle, but Still Lose the War