Coronapocalypse and Gold: How High Is Too High for the Yellow Metal 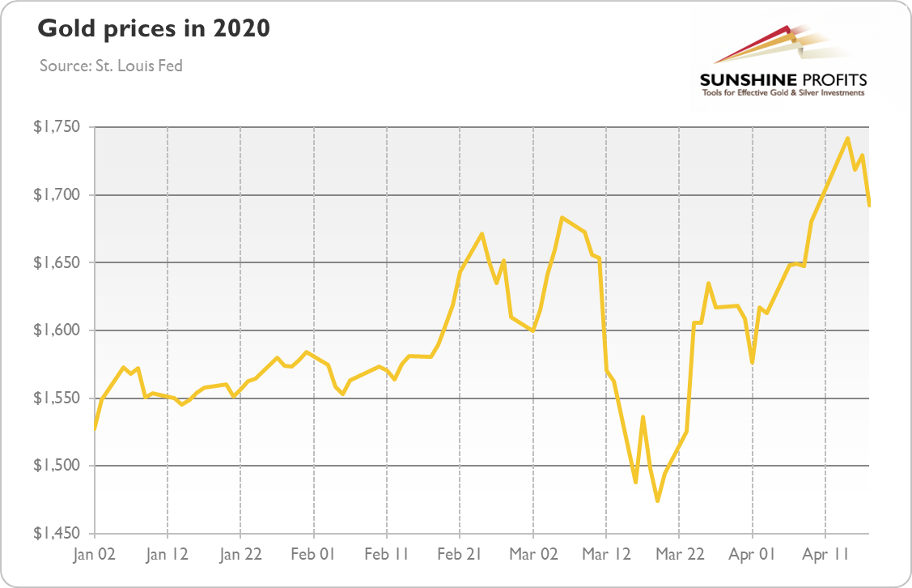 The obvious reason for this bullish move was the COVID-19 pandemic and the resulting shutdown of the global economy. As a result of the coronavirus shock, most of the major drivers of the gold prices improved. In particular, the real interest rates, as measured by yields on the 10-year inflation-indexed Treasuries, dropped, plunging into negative territory. As one can see in the chart below, gold prices behaved like a mirror image of the real government bond yields. 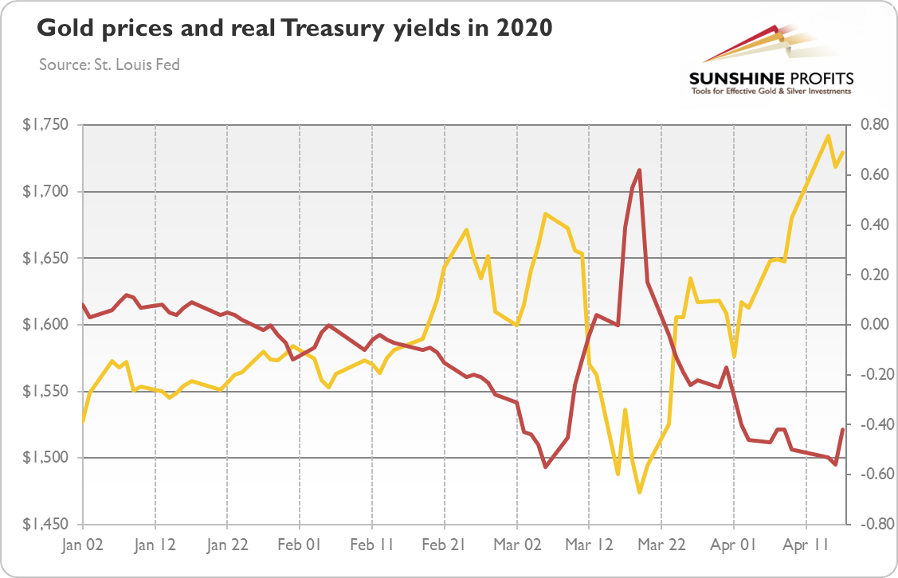 Moreover, the risk premium also surged, which supported safe-haven assets such as gold. As the chart below shows, credit spreads greatly widened, while the CBOE Volatility Index skyrocketed. 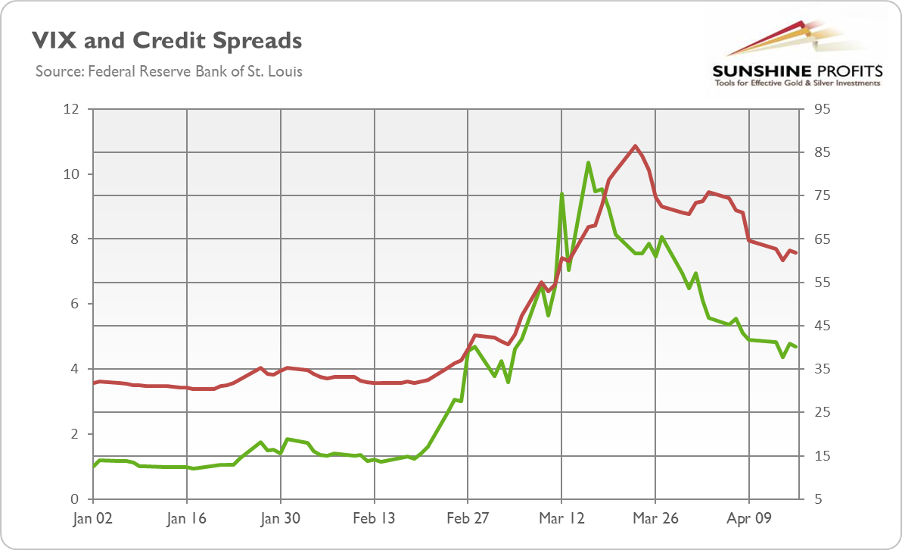 Some people complain that gold’s performance has been rather shy given the depth of the negative economic shock. Well, it’s true that gold has not rallied so far, but achieving almost 12-percent gain when almost all assets plunged makes gold one of the best performing asset in 2020, if not the best.

Gold prices did not soar further because of two factors. First, just as in the immediate aftermath of the Lehman Brothers’ collapse, investors started to liquidate gold holdings in order to raise cash. But when the dust settles and the sell-off inevitably ends, the yellow metal will have a cleared path upward.

Second, the US dollar appreciated amid the coronavirus crisis, as the chart below shows. The greenback is also seen as the safe haven during crashes, so investors switched their funds from all over the world and put them into the US-dollar denominated assets. Given the strong negative correlation between the greenback and gold, the appreciation of the dollar exerted downward pressure on the gold prices. However, gold and greenback can both appreciate during the financial crises, as it was the case in early 2009. Importantly, the surge in the US fiscal deficit and public debt may weaken the dollar in the longer run.

OK, we know what happened, but what’s next for the gold market? Will the price of gold quickly rally to $5,000 or more, as some analysts claim? No. It’s true that the Fed’s balance sheet is going to balloon, and the money supply will soar, but there is no correlation between the money supply and gold prices. As you can see in the chart below, the broad money supply has been rising since the 1970s (the data series we got unfortunately starts only in the 1980s), when Nixon closed the gold window, but the price of gold has not – instead, the yellow metal experienced bull and bear cycle. 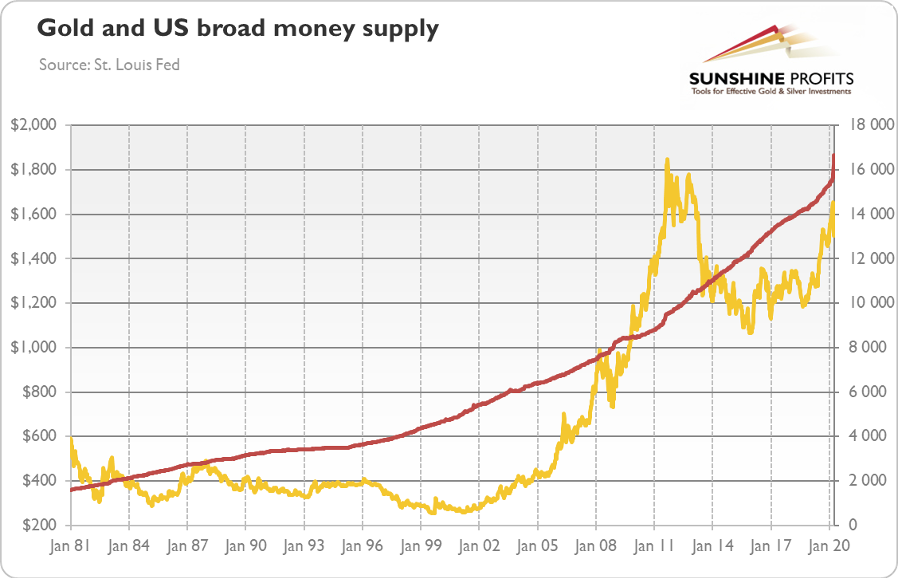 The ratio between the fiat money supply and gold’s supply is no simple formula for gold’s fair value. You see, the claims that the soaring money supply could push gold prices to a dozen or even tens of thousands dollars are based on the assumption that the global economy will return to the gold standard (then, the price of gold would have to indeed increase to “replace” the value of all demonetized paper money), which is highly unlikely, no matter whether we sympathize with the idea (we do) or not.

Let’s move now to the aftermath of the Great Recession. The price of gold increased 244 percent, from $775 on September 15, 2008 to $1,895 on September 5, 2011. So, if history replays itself, the price of gold could increase to about $4,140. However, it was not a quick rally, it took three years for gold to reach the peak. And history never repeats itself, but only rhymes: remember that it always easier to rise when you start from lower levels.

Does it mean that we are bearish on gold? Not at all. Of course, there is a risk for gold outlook that the pandemic will be quickly contained and the economic growth will swiftly rebound. However, we think that the V-shaped recovery is unlikely. Social distancing will not disappear in one day. You see, the pandemic is not confined in time and space like a hurricane or a terrorist attack. The coronavirus will linger through the year (or even longer, according to Michael Osterholm, an infectious-disease epidemiologist at the University of Minnesota). The problem is that people still do not understand that this epidemic is not a matter of just weeks.

And there are significant downside risks for the economy, which – if they materialize – could push gold prices even further up. In particular, there might be a feedback loop in the financial system that could culminate in a systemic financial crisis. We believe that many analysts underestimate the possibility of further repercussions, hoping for a quick rebound. Remember 2007? Economists believed then that the problems would be limited to the subprime mortgage market and wouldn’t affect the whole economy. Yeah, right.

However, even if the quick recovery happens, the low interest rates, dovish central banks and high debt will stay with us, which would support the gold prices. Thus fundamentally, the coronavirus crisis is very positive for the gold prices, and the outlook for the yellow metal in 2020 has clearly improved compared to a few months ago.