Why Owning Stocks Is the Single Best Way to Get Rich

The world’s richest man just made history. Amazon (AMZN) founder Jeff Bezos set a new record when his net worth jumped by $13 billion in one day.

Bloomberg now estimates Bezos is worth $185 billion. And get this: he’s now personally worth more than oil giant Exxon Mobil or Nike!

The secret behind Bezos’ financial triumph is simple. The billionaire CEO has made the same $81,840 salary for two decades. But the bulk of his vast fortune is tied to the 57 million shares of Amazon stock he owns—worth $180 billion.

So when Amazon’s stock jumped 10% on July 23, Bezos’ net worth spiked $13 billion in just a few hours. In fact, controlling vast sums of stock market wealth is a common thread among the world’s rich. Scroll through Bloomberg’s Billionaire Index and you’ll see they all vaulted to the top by owning their share of a successful business.

For example, look at the Waltons, heirs to the Walmart (WMT) throne. Bloomberg estimates they’re the richest family in the world, with a $200 billion treasure trove. And almost all of their vast fortune is tied to their 50% ownership stake in Walmart. And this isn’t just a case of super-rich guys getting even richer.

Every day, tens of thousands of regular Americans are reaching an entirely new level of wealth. According to Credit Suisse, one in every 17 Americans is now a millionaire! So, what’s going on here? As I’ll show you today, it comes down to what I believe is the single greatest wealth-building secret on the planet.

These folks didn’t get rich solely by grinding their way through a 9 to 5 job. Even high earners like doctors and lawyers don’t typically earn millions of dollars a year. Instead, the path to amassing vast fortunes is paved by owning a successful business.

That doesn’t mean you have to build the next Amazon or Walmart. You can “piggyback” on billionaire CEOs like Bezos by buying shares of their companies on the stock market.

This is the playbook many wealthy folks follow. Recent data from investment bank Goldman Sachs shows the richest 1% of US households now own more than half the stocks in America! At the end of 2019, they controlled $21 trillion in stock market wealth.

Longtime RiskHedge readers know stocks have been on a tear over the past decade. The “tech heavy” Nasdaq has shot up 750% since 2009. And it just hit another all-time high: 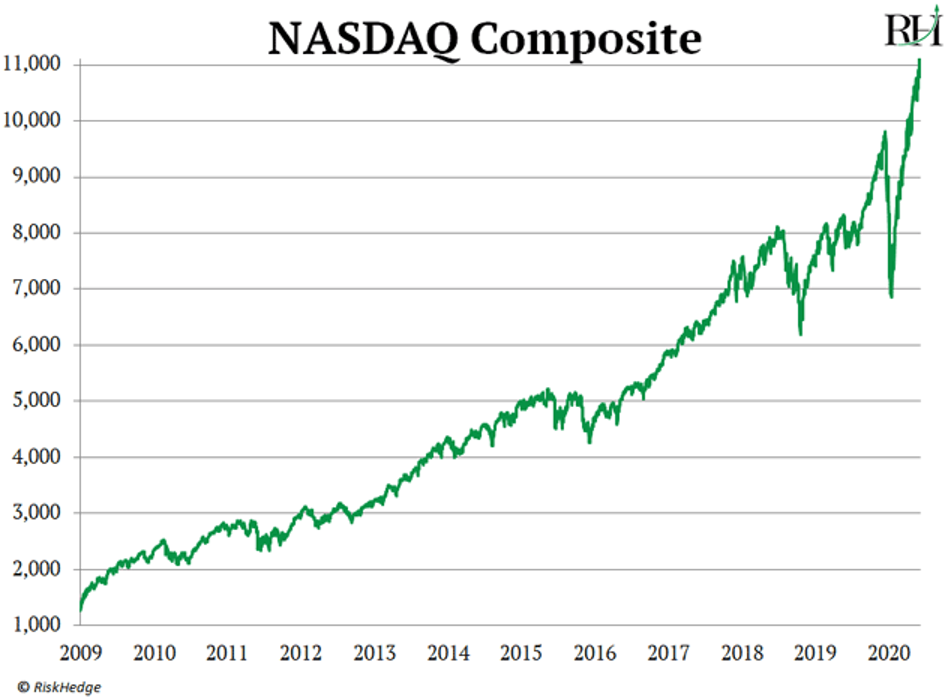 Roughly nine out of 10 US households that earn over $100,000 own stocks. So it’s no wonder this decade-long stock market boom has minted a whole new class of millionaires.

These folks avoid the Number One pitfall to achieving financial freedom. As I said, even well-paid folks like doctors and lawyers rarely get rich through work alone. Instead, they save a big part of their paychecks and invest it in businesses.

In other words, it’s very hard to get truly wealthy by renting out your time. Think about it: you can only work so many hours. So even if you’re earning thousands of dollars a day, your “upside” is capped. It also means you’re not earning money when you’re sleeping… when you’re on vacation, or when you’re retired.

But when you save and invest your savings in a successful business, you accumulate assets that earn money while you sleep. For example, think about buying Amazon shares. Every time the disruptor bulldozes through another industry and its stock soars, you get a slice of the profits.

When it crushes earnings and Jeff Bezos’ net worth surges, it means you win, too. Think of it as a second income that often brings in more than your main job.

Stock Market Wealth Is One of the Biggest Separators Today

You hear a lot about the “top 1%” versus the have-nots in America these days. The gap between the rich and the poor has always existed. But never, ever on this level. And in many cases, the stock market has been the great separator.

Remember, nine out of every 10 households with incomes over $100,000 own stocks. I personally know many folks who’ve become millionaires on the back on the stock market’s surge over the past decade.

But the sad reality is most American’s don’t have a cent invested in stocks. Only 20% of households earning less than $40,000 own stocks. And research from the National Bureau of Economic Research shows almost two-thirds of investors have less than $10,000 in the stock market.

In other words, the stock market’s meteoric rise over the past decade has barely helped most families. In fact, a recent survey by robo-advisor Betterment highlights this great misfortune.

When asked how the stock market performed over the past decade, roughly half of folks said the market had gone nowhere. Worse yet, a further 20% said they thought it fell!

The number of Americans who own stocks has plunged since 2000. But after a relentless 20-year decline, this trend is reversing. Thanks to commission-free trading, all the major brokerages have seen millions of new investors flood into the market in 2020.

Charles Schwab said it opened more accounts last quarter than during any three-month period in the firm’s history. TD Ameritrade added 661,000 new accounts, with assets of $78 billion in the first half of 2020. And get this: the top 15 trading volume days in the firm’s history all happened in the past three months. New accounts opened on E*Trade in the first half of this year were more than double that of any prior full-year period.

In short, millions of new investors are getting into stocks for the first time. And it’s a wonderful thing.

Remember, You’ll Probably Never Get Rich “Renting Out Your Time”

Working hard and saving money is necessary. But it’s often not sufficient. Owning a piece of a successful business—aka owning stocks—is the main path to wealth that’s open to anybody.

From chatting with RiskHedge readers, I know many of you are walking this path. But if you’re unsure about investing in the stock market, now is the time to get off the sidelines.

It’s okay if you only have a little money to get started. These days it’s totally free to buy stocks through most big brokerages. And you can usually open an account with as little as $100.

The important thing is to break the inertia and start investing. No excuses. Do you own stocks? What percentage of your money is in stocks? If you don’t own any stocks—why not?

If you’re just getting started investing, first look to buy an index fund that owns a lot of stocks. That way you’ll own tiny fraction of hundreds of businesses.