You Are All No Better Than the Cleaner

So, I woke up this week to the news that Bill and Melinda Gates are divorcing. It made me think about how many people were thinking Bill Gates is divorcing his wife; versus Melinda Ann French is divorcing Bill Gates? In a similar vein, can you name Jeff Bezos’s ex?

It builds on my theme of most people just want the same thing: happy family, happy life. We don’t need money and wealth; we just need a good life. Money allows us to live a good life, but that’s because money is a construct that is required in our lives today to live a good life.

Wherever I’ve been in the world, whether people are living on $1 a day or $1m a day, all people want is safety, security, food, shelter and family. To love and to be loved in return.

Aw, shucks. Am I getting old and sentimental?

It struck me when I watched the film about the Yi people of China, and it struck me in my travels around the world, particularly Ethiopia. Ethiopia was ingrained in my head as the place of famine and death due to Live Aid. In reality, Ethiopia is a country of great people, great music, laughter and love. That was one of my favourite travel experiences ever.

But I found the same across Africa, South America, Asia and everywhere. People may be poor, but it does not make them lesser than you. You may be the wealthiest person in your village, but you’re still a person; a human; a homo sapien.

Money doesn’t make you better than me or him or her or them. Your wealth and status do not make you superior. All humans are equal … but some are more equal than others.

This struck me when I read this note by a cleaner at HSBC. 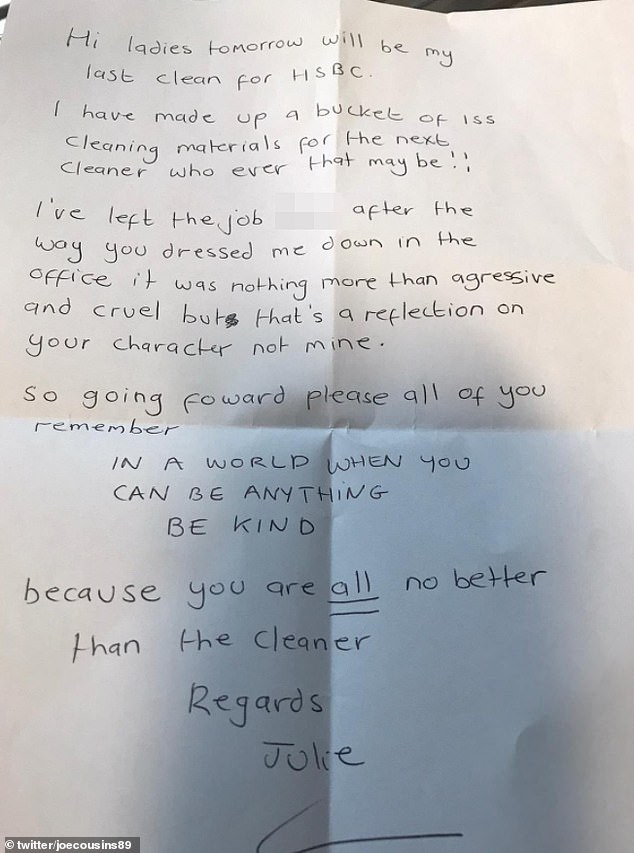 If you cannot see the picture, here’s the rub. A woman who had cleaned bank branches for 35 years was given a dressing-down by the bank manager in an “aggressive and cruel” way. She left that day with a note that stressed: you are all no better than the cleaner.

This is a woman who had raised seven children and has seven grand-children. More than this, she’s a woman who has dreams, ambitions, ideas and more. She is a human. She is the same as you, no matter who you are or how wealthy you are.

The note reminded me of the story of John F. Kennedy visiting the NASA headquarters during the moon shot developments of the 1960s. According to popular legend, the President met a cleaner mopping the floors during his tour and asked him: “Why are you working so late?” The cleaner replied, “I’m helping to put a man on the moon.”

Oh, and what was the name of Jeff Bezos’s ex-wife?

Related: Would You Believe They Put a Man on the Moon?