The Anatomy of a Great Idea

There is no such thing as a new idea. It is impossible. We simply take a lot of old ideas and put them into a sort of mental kaleidoscope. We give them a turn and they make new and curious combinations. We keep on turning and making new combinations indefinitely; but they are the same old pieces of colored glass that have been in use through all the ages. ~ Mark Twain

This week has largely been spent talking about the generation and deployment of new thinking. We’re hot off the back of a successful launch of new programme for colleagues at Bromford (the stunningly titled ‘Ideas’), and then I also spent Tuesday evening talking to a Leaders Masterclass on moving from ideation to action.

Ideas are not invented equally. I’d suggest that anyone who repeats the adage that ‘no idea is a bad idea’ has never attended a management away day.

That said, bad ideas can be stepping stones to great ones. Ideas that solve a problem in a unique way are usually a combination of existing ideas, many of which may seem bad at first. If you accept that most ideas from colleagues will be bad ones that will help you move on to new ideas faster and more easily.

So let’s think about the anatomy of a great idea and the four components:

1. The cost of the problem you are trying to fix is understood (or at least estimated)

Generally the idea must be ‘priceable’ i.e it’s got to be worth buying. This may be a cost, time, or inconvenience saving, but it’s got to make someone’s life easier. Most of us can’t remember a time before washing machines, but if you have an elderly relative ask them whether they are worth £300.

2. The cost of solution needs to be less than the cost of problem

It’s simply not going to work if the solution you are offering isn’t convenient or cheap enough. The price of innovative solutions should reflect how much people value the problem you have solved. In other words, how much is bridging the value gap worth to your customers or colleagues?

3. There should be no easily available alternatives that are just good enough.

A great idea should have a unique value proposition as people are lazy and won’t switch if they have something that largely does the job. Most people don’t tariff switch as the thought of saving £10 or £20 a year simply isn’t worth the perceived effort of switching. Similarly, Google+ failed because for all the faults with Facebook – it’s just about good enough for what most people need.

This one doesn’t always hold true, but generally a great idea solves a problem that is repeatable i.e people need the solution more than once. We wouldn’t all buy lawnmowers if grass only needed cutting once a year.

Let’s also remember that the greatest ideas are often the simplest. Your idea may be complex in execution, but it should be simple in concept. 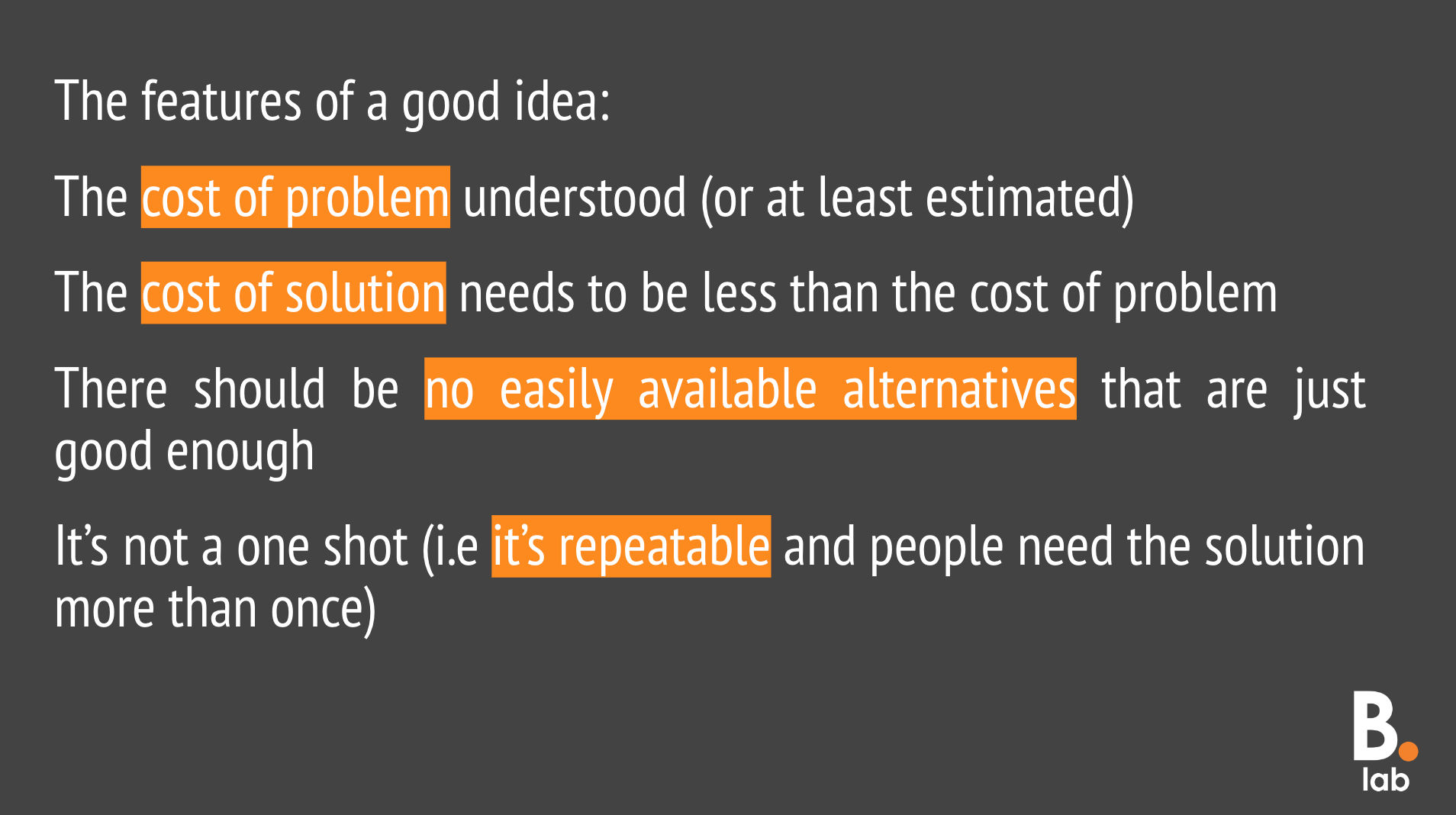 As we’ve established then, a good idea is founded more in the world of problems, but we rarely talk about them. I’ve worked in idea focused cultures and I’d argue that although they give the impression of being more ‘creative’, there’s actually very little of substance behind it. It’s often just innovation theatre.

Coined by Steve Blank the term innovation theatre is where ideas – arguably the easiest bit of the innovation process – are valued more than the discipline of turning those ideas into profitable business models. This requires a level of leadership commitment that is often harder to get.

An idea focused culture is exacerbated by the following conditions:

Perversely, the way to have the best ideas is not to encourage ideas at all, but rather to obsess about really great problems.

Related: Whatever You Do Today, Don’t Start A Transformation Programme