You Can’t Fight the Fed: One Constant in a World of Change

It seems like everything has changed over the last year.  The standard 60% equity, 40% bond model that worked so well for decades is down 16.6% through October 31st.  The security blanket of “the Fed put” bailing out investors is nowhere to be seen.  Inflation, long dormant, has surged to be the number one concern for many in America and across the globe.  Cryptocurrency and other “moonshots” that made billionaires out of thin air are rapidly evaporating.

With so much changing so quickly, it is worth asking, “Has anything remained the same?”  In our opinion, there is one truth that has endured through 2022’s carnage:

Since the turn of the century, the Federal Reserve’s answer to any problem was loose monetary policy.  Sometimes the calamities were quite large and warranted a robust policy response- think of the Dot-Com Bust & September 11th attacks (2000-02), the Global Financial Crisis (2007-09), and the Covid-19 Pandemic (2020).  Other times, like the Taper Tantrum (2013) or the near-miss bear market in the fourth quarter of 2018, there was weak justification for continued loose monetary policy.  But the Fed proceeded anyway.

There’s an old saying: “to a hammer, everything looks like a nail.”  In this case, the Fed’s monetary policy was the hammer, and its answer to any problem was to keep money cheap and flowing. 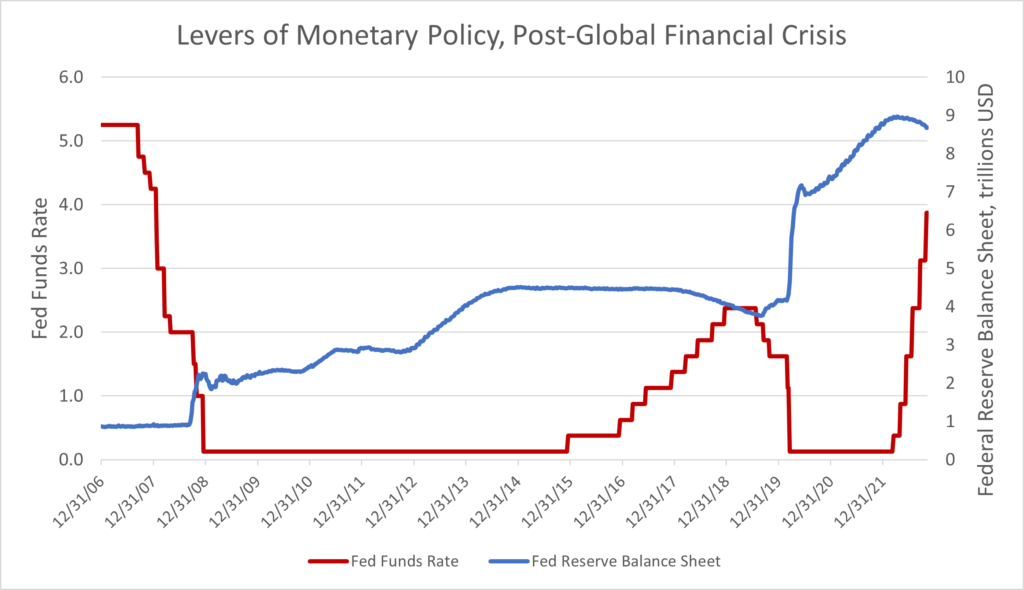 This flood of liquidity lead to what people would call “the everything bull market.”  It seemed impossible not to make money, as major investable asset classes reached record highs.

You can’t fight the Fed.  As long as the money machine was printing, prices continued to defy gravity.

Until, of course, it stopped.

The Fed Taketh Away

The Fed was finally forced to reverse course after inflation rocketed to levels not seen since the early 1980’s.  Given the choice between continued high inflation and the risk of instigating a recession, the Fed has clearly picked its poison.  The Fed has embarked on a sustained campaign to tighten monetary conditions.  The Fed Funds rate has gone from 0.00%-0.25% to 3.75%-4.00% in 2022, often taking the form of 75 basis point moves.  The rate on 10-year Treasuries has gone from 1.52% at the end of 2021 to 4.10% on October 31st.  Quantitative easing has ended as the Fed seeks to pare down its bloated balance sheet.

As a result, the “everything bull market” has turned to the “everything bear market.”  Equities, bonds, and real assets are all down significantly.  The moonshot gambles aren’t just down, they’re imploding. 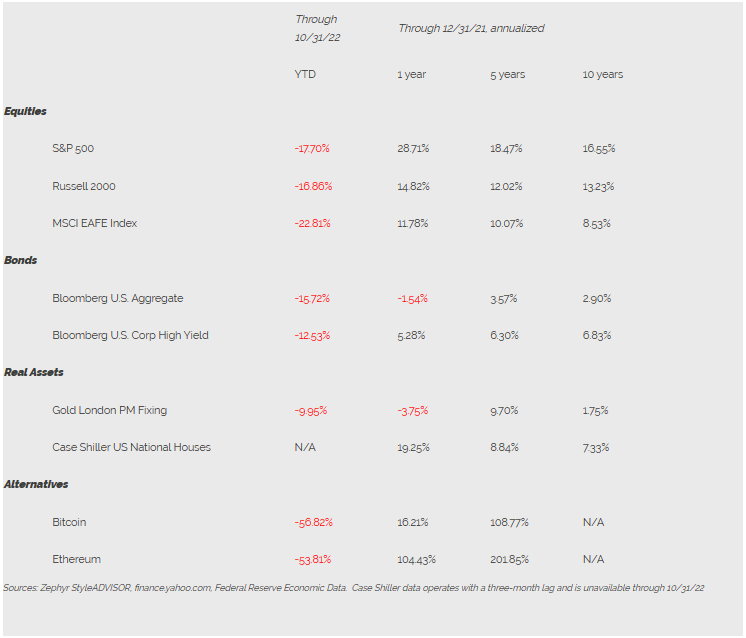 One could look at each of these asset classes individually and argue over the pros and cons of each.  However, if one takes a step back and looks at the forest rather than the trees, the case can be made that one factor is driving all these assets down.  The end of loose monetary policy is the one thing that negatively impacts all these asset classes.

Rising interest rates is that common factor in this nightmare scenario.  It is a form of market-wide risk that cannot be diversified away.  However, market risk can be hedged. Hedging market risk can be accomplished by using put options, which are inversely correlated to the underlying investment, that may provide investors true diversification in what seems like an “everything bear market.”

Options-based, hedged equity strategies offer investors a way to remain invested in the equity market, while maintaining a hedge for risk mitigation position. This approach doesn’t rely on bonds, with their high sensitivity to rising interest rates. Such strategies may provide a way for investors to navigate the Fed’s new course of tighter monetary action instead of fighting a losing battle.