What To Know About Yield Curve Control

Treasury yields have been increasing steadily since September and have exploded upwards at an alarming rate over the past month.

Most lending is based around treasury yields because these are considered “risk-free” (backed by the US Government); astute investors compare the risk of an investment and weigh this against the potential yield above the risk-free rate to decide if it is worth their investment.  The Federal Reserve has played an increasingly large role in the Treasury market since the Financial Crisis by enacting what is now called Quantitative Easing (QE), a similar term to Yield Curve Control (YCC).  Let’s look at the two ways the Federal Reserve intervenes in the Treasury market.

There are a few items to establish before diving into the depths of QE and YCC.  One is that the Federal Reserve is independent of the Treasury, the former representing monetary policy while the latter representing fiscal policy.  Over the past year, the two have become more entangled than ever; one example being the appointing of Janet Yellen, former Federal Reserve Chairwoman, to the US Treasury Secretary position for the Biden Administration.  This article will focus mostly on the Federal Reserve’s roles.

Quantitative easing in the United States began November 25th, 2008, two months after Lehman Brothers declared bankruptcy.  QE was intended to be a temporary fix for injecting liquidity into the capital markets.  Central banks apply QE by buying longer-term securities such as treasury bonds and mortgage-backed securities on the open market to push short-term rates down, essentially acting as a creator of demand with a specific spending ability during a given time period.  The issue that has evolved with QE is that, similar to lowering interest rates, once it is ended there is a compounding effect of issues that clog up the economy.  Lower rates create “cheap money,” effectively making it easier for individuals and businesses to borrow money, which is a major stimulator of the economy.  By implementing QE, the Federal Reserve can suppress interest rates from rising.  Yield Curve Control is a similar idea but executed slightly differently and carries its own inherent consequences.

The goal of YCC is to manipulate yields to ensure the yield curve does not invert (long term debt having a lower yield than short term debt, making long term debt financing less lucrative).  QE focuses more on short-term yields – YCC focuses on mid and longer-term yields.  Under YCC, the Federal Reserve has an unlimited spending ability (remember QE is a specific amount).  QE and YCC are under the same umbrella and share the overall goal of stimulating economic growth.  There are positives and negatives of both of these relatively new monetary policies and are some of the most debated topics among economists today.  The best case study one has on the effectiveness is from Japan, a country which has resorted to QE (and more recently YCC) for the past two decades. 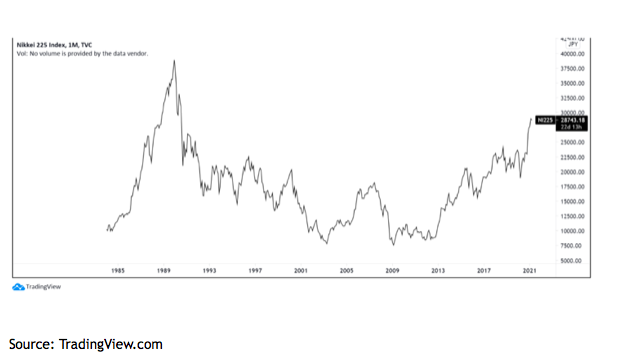 Japan’s top stock index, the NIKKEI 225, can be seen above.  The 80’s can be described as a significant growth period where interest rates were low and real estate investing was booming.  The next ten years following the bubble are described as “The Lost Decade” in Japan.  The NIKKEI bottomed out in 2003 after an 80% decline from the bubble peak.  Of note is that, despite inflation and intervention, the NIKKEI has not returned to its 1989 high.

Japan began its experiment with QE in 2001 when the Bank of Japan (BoJ, the central bank) began to buy government bonds as a way to improve liquidity in the financial markets.  With limited success through the next eight years, Japan’s market tumbled through the Financial Crisis.  The BoJ then began a similar program that can be compared to the Fed’s ETF bond buying of March 2020: Japan’s central bank began to buy equity ETFs, taking a position in the Japanese stock market.  By creating a buyer with unlimited cash, faith was restored in the Japanese market which rallied from 2013 on with minor hiccups.  However, in 2016, short term rates began to rise too quickly, and the BoJ decided to intervene through Yield Curve Control to push the rates back down.

This level of intervention is not without consequences.  The Bank of Japan now holds 7% ownership of the companies within the NIKKEI index (see Wall Street Journal’s article here for more information) What happens when they own 10%? 50%? 100%?  What happens during the next unforeseen crisis?  While faith in the markets going up was restored, what about the faith in the market being free or a true and fair indicator of the economy?

We are in uncharted territory across the globe with central banks intervening throughout the current crisis.  The United States Federal Reserve is leading the charge as the dollar is the world’s reserve currency.  The ramifications of any interventions are both vast and obscure; it is only time that can tell what they will be.

Related: A Beginner’s Guide to Enhancing the Client Experience with ESG