What I Got Wrong About 2021’s Biggest Story

There’s going to be a lot of disappointed kids…

I asked my barber what present his son wanted this Christmas.

“A PlayStation 5… but he might as well ask for gold dust,” he said.

Parents are scrambling to get their hands on Sony’s latest game console.

My barber rings four stores every morning to check if a new batch of PS5s has arrived. He even followed a Twitter page dedicated to alerting parents when new stock comes in.

Why is it so tough to get your hands on one?

We’ve been on top of the global chip shortage since February. And it’s only gotten worse, as I predicted.

But there was a crucial piece of the story I got wrong. It has to do with what kind of chips are in short supply. And it’s even more reason to buy leading chip stocks today.

The more transistors on a semi, the faster it is.

But here’s the thing… It’s not the cutting-edge chips that are in short supply. It’s the old chips—the ones in everything from washing machines to toothbrushes and microwaves. We’re running out of the chips that go into toasters and doorbells. These chips have been around for decades and only cost a few pennies.

But sales of these old chips are growing two to three times faster than the ones in our iPhones and Teslas!

And they’re behind the shortage that’s cost automakers like GM and Ford $210 billion in lost sales this year.

For example, ever heard of a display driver? There’s a good chance you use it every day and don’t even realize it. It conveys basic instructions for illuminating the screen on your phone, computer monitor, and even the navigation system in your car.

This $1 device is at the center of the chip shortage. It’s by no means cutting-edge… but it now costs as much as $150. And you’ll be waiting up to 52 weeks for it to arrive.

For example, the chip inside the new iPhone 13 costs a couple hundred bucks each. But these legacy chips that power the overhead lights in your car usually sell for a few dollars, some as little as pennies.

It costs roughly $4 billion and two years to build a plant that can churn out the chips automakers desperately need. And then, it takes a year or two to fine-tune the chipmaking machines before they’re ready.

By the time a new factory starts making money, demand for these older chips might have slumped.

Simply put: We can expect the chip shortage to drag on longer.

This is what I got wrong about 2021’s biggest story.

Companies like ASML (ASML), which was the first ever stock I recommended in the RiskHedge Report.

Longtime readers know ASML makes the only machine capable of producing the world’s fastest chips. Its extreme ultraviolet lithography (EUV) machine is essential to crafting the latest and greatest chips.

In 2018, I said if I could only buy one stock for the next five years… it would be Nvidia (NVDA). Nvidia chips power the majority of the world’s supercomputers.

But remember, old chip sales are growing twice as fast as bleeding edge. They aren’t sexy, but legacy semiconductors have become just as important as new chips. They’re behind 2021’s biggest story.

ASML and Nvidia have surged 280% and 390% since I first mentioned them… Disruption Investor subscribers are taking a free ride on them. And the two stocks are still buys today.

Remember: demand for chips has only gone one way our entire lives… UP. Top research firm Gartner expected chip sales to jump 27% to $590 billion this year. 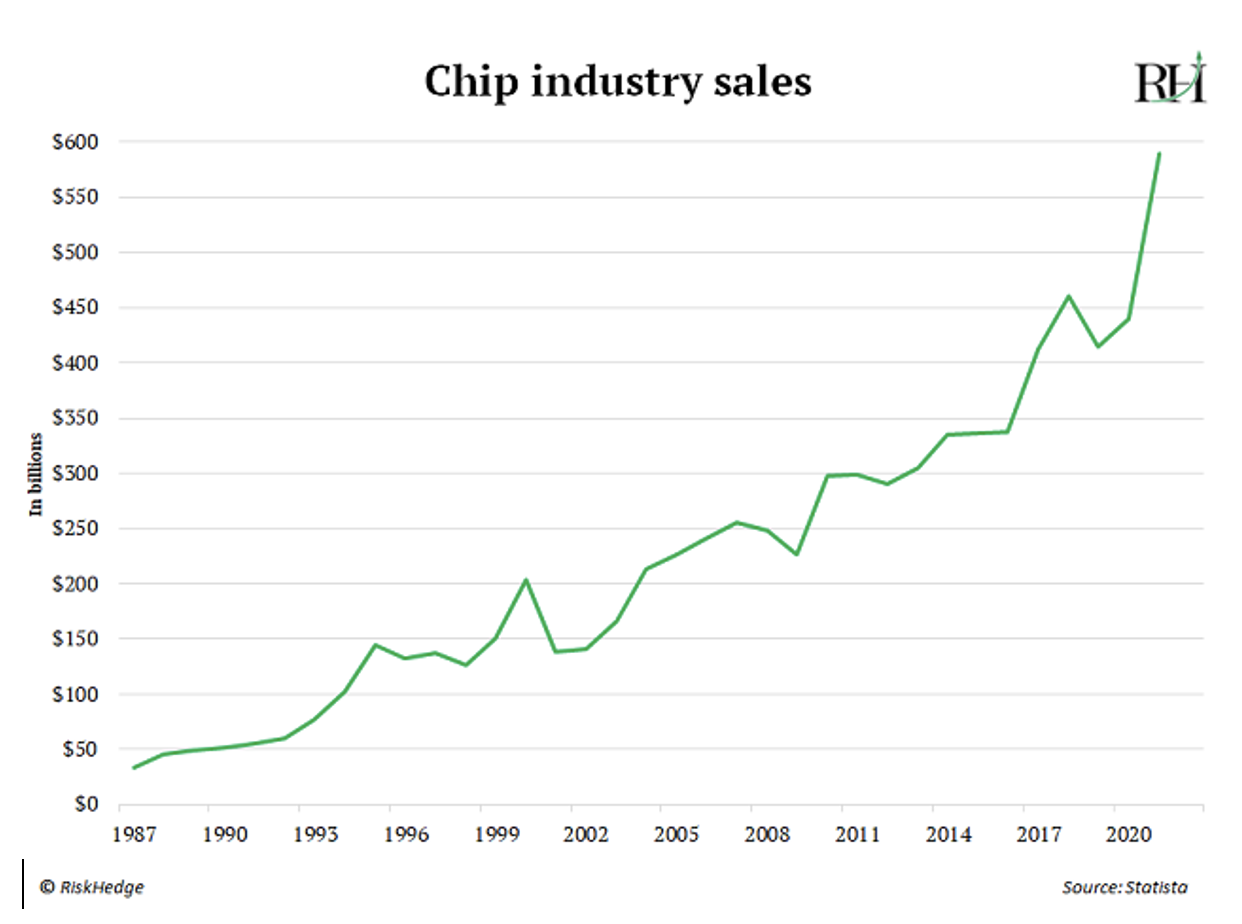 Investing in semis is hands down my surest bet for the next decade.

Related: This Simple Mindset Shift Could Help You Make Millions