There Are Cracks in the Housing Market

Traditionally, the housing market is not as prone to bubbles as other financial markets, but we are seeing more and more headlines speculating that we may be on the verge of a housing recession. Interest rates on a 30-year mortgage are nearing 6%, home prices are high, homebuilder sentiment has dropped significantly and with that single family starts and permits are dropping. Since housing impacts GDP, we will look at previous “bubbles” and the current environment.

Although we would not view this as a housing bubble, there are cracks developing.

You may recall, after the 2000 stock market crash that the housing bubble began forming as home ownership grew at an alarming pace while interest rates were dropping, and the government encouraged banks to reduce lending requirements. This buying frenzy drove prices up by 50 to 100% in some regions. Although the housing market today is not the housing market of 2005–2007, during 2005–2007 prices peaked as the stock market began to rebound and interest rates began to move up. Housing prices then began to plummet, which was evidenced by a decline in housing prices by more than 40% in some regions and in 2008 the Case-Shiller home price index reported its largest price drop in the history of the index. Factors such as high growth in home ownership, low interest rates, and relaxed lending requirements all contributed to the bubble bursting.

Unemployment began rising in 2007 and led to a perfect storm in which many homeowners could no longer afford to pay their mortgages. In October 2007, the U.S. Secretary of the Treasury called a bursting housing bubble the most significant risk to the broader economy and a year later the housing market collapse sparked the worst financial crisis since the Great Depression.

Coming out of the recession home prices rose, and foreclosures began to fall as the economy recovered. The recovery led to several positive trends in housing including improving existing home sales, higher home prices and an increase in single-family housing starts. The housing market is a leading indicator and the strength in the housing market is important when evaluating the direction of the economy. National Association of Home Builders (NAHB) research shows that building 1,000 average single-family homes in a typical metro area creates 2,900 full-time jobs and generates $110.96 million in taxes and revenue for local, state, and federal governments.

The relationship between housing and GDP is reflected in the cycles of residential fixed investment (RFI), personal consumption expenditures and GDP growth. Quarterly data from the U.S. Commerce Department provides insight into the contribution that residential construction has on the U.S. economy and estimates housing’s share of the economy moved lower in the first half of 2022. Housing’s share of GDP decreased to 16.6% in the 2nd quarter (Q2) after posting a 16.7% contribution in Q1 and in Q2, RFI decreased to 4.7% of GDP. The second component of housing on GDP is the measure of housing services which includes rents paid by renters and owners as well as utilities. Also in Q2, housing services represented 11.9% of GDP.

So, where are the cracks?

HMI measures homebuilders’ confidence and has fallen for eight consecutive months, marking this as the worst stretch since the housing market collapse in 2007 as interest rates and high home prices continue to challenge housing affordability. Builder confidence in the market fell six points in August to 49 which was the first time the index fell below the breakeven measure of 50 since May 2020. Approximately 20% of home builders in the HMI survey report reducing prices to increase sales or limit cancellations. Except for the beginning of the pandemic, the August buyer traffic reached the lowest level since 2014. 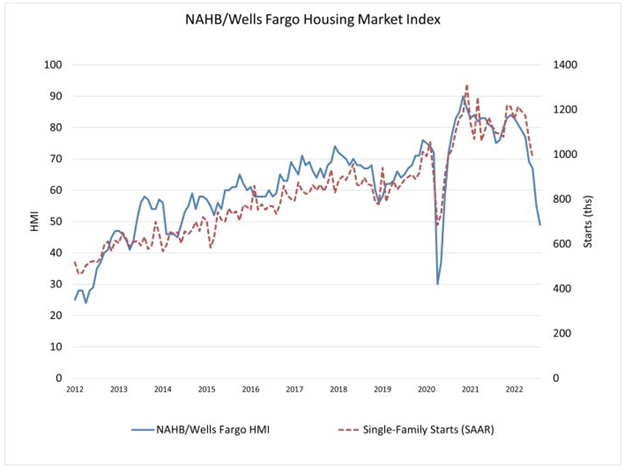 Single-family housing starts declined 9.6% while permits dropped 1.3% in July on a month-over-month basis. The total volume of single-family starts may post a decline in 2022, the first such decrease since 2011. However, as signs show the rate of inflation may be peaking, long-term interest rates may be stabilizing, which will provide some stability for the demand-side of the market in the coming months. On a year-to-date basis, single-family permits have had a 3.6% drop with every region declining. 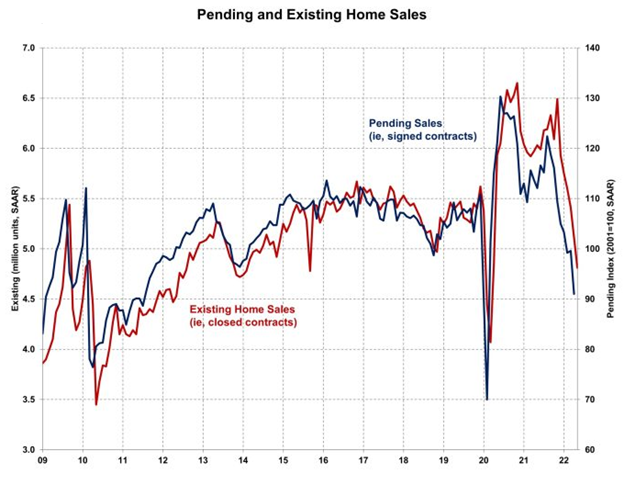 New home sales fell in July to the lowest level since January 2016. Down 12.6% from June and down 29.6% from July of last year. Meanwhile inventories have risen to 10.9 months and are 40.6% higher than last year. The July sales slump is the latest example of how the housing market may be buckling under the weight of high prices and elevated borrowing costs. 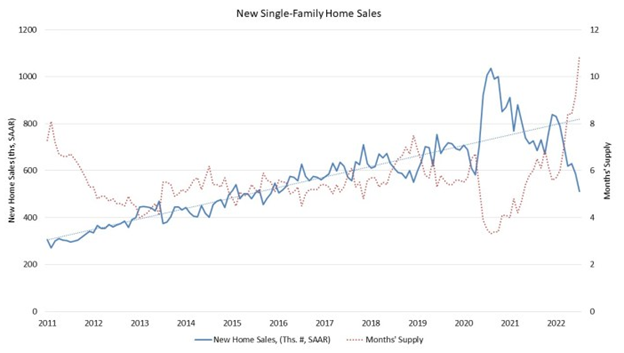 Mortgage rates surged to the highest level since June as U.S. Treasury yields marched higher. According to Freddie Mac, during the week of August 22 the average for a 30-year loan rose to 5.55% and other than the 55bps (basis point) move in June that was the steepest surge since 2013. Since then, rates are approaching 6% again and that is nearly double where we started the 2022.

Higher mortgage rates and elevated home prices may be pushing out would-be buyers. The S&P/Case-Shiller National Home Price Index rose 0.33% month over month in June and is 17.96% higher year over year. This is a large increase but decelerating as it happens to be the slowest pace since May 2021. These big price increases tend to be followed by faster Owners’ Equivalent Rent (OER) inflation. As we have stated, these shelter costs are “sticky” and the Fed views home-price inflation as a contributor to rent inflation.

According to the National Association of Builders/Wells Fargo Housing Opportunity Index (HOI), only 42% of new and existing homes sold in Q2 were affordable to median-income families.

The trends identified above are a small sample of the direction of the housing market. The abrupt halt to the pandemic housing boom has left builders scrambling to adapt. Builders are reducing starts and applying for fewer permits to avoid a high inventory of completed homes sitting empty. The supply of new homes relative to sales in June was the highest since 2010 and in July buyer traffic plunged to the lowest level for the month since 2012, according to a NAHB survey.

If you define a housing recession as slowing residential activity, higher prices and slower growth (or home building), then we are in one now. This also contributes to slower economic growth as evidence by the GDP data. It’s important to note that home prices are decelerating, not declining. This is another biproduct of the pandemic housing boom. The housing market is due to slow down, but that doesn’t mean the “bubble” is bursting as we’ve seen in the past.

Lending standards are tight and initial down payment requirements remain high. The fiscal stimulus in 2020 and 2021 increased the number of first-time buyers. However, anyone who could not purchase a home last year is in a worse position now. Redfin reports that roughly 63,000 agreements to purchase homes were cancelled in July, equal to about 16% of properties that went under contract that month.

As previously mentioned, housing can be viewed as a leading indicator. From the 1960s to 1990s, home sales typically peaked well before recessions and typically recovered before the economy. This changed in the 2000s with the changes in mortgage lending standards. We have had two negative GDP prints this year which highlights the concern for economic growth going forward. The housing data is a useful barometer for where the general economy may be headed. These reports should be monitored closely as expectations for a recession in 2023 remain high and this is only one component of the calculation for economic growth.