Over the past few years, we’ve written about trends in small businesses based on the National Federation of Independent Business (NFIB) Survey of Small Business Economic Trends. We follow these trends because small business owners and small companies in the U.S. create about two-thirds of net new jobs, drive innovation and account for 44% of U.S. economic activity. This survey has a 48-year history of tracking insight from more than 325,000 small business owners and provides valuable data related to Small Business Optimism, Labor Markets, Capital Spending, Inventories and Credit Markets in businesses across the country. This survey also serves as a counterbalance to the large-company bias of the Purchasing Managers Index. 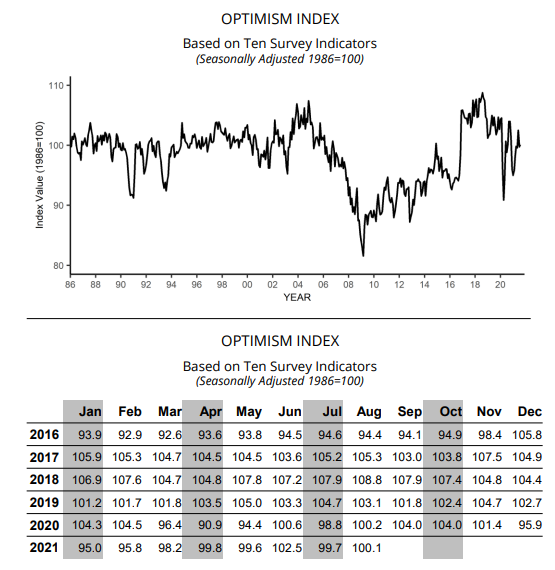 The August optimism reading increased to 100.1 which was up 0.4 points from July as 5 of the 10 components improved, four declined and one was unchanged. The improvement in optimism is interesting as small business owners have grown pessimistic about future economic conditions as delta variant cases continued to move higher. You may recall in February 2020 the reading was 104.5 and dropped to a seven-year low in April 2020 of 90.

It has been a bumpy ride for small businesses since then as they continue to struggle to find workers. 50% of owners, a record high reading, have open positions they can’t fill. The NFIB reports unfilled job openings remains well above the 48-year average of 22% and 29% of respondents reported they found no qualified applicants for open positions; a 48-year high.

In an effort to attract qualified workers, 41% reported raising compensation which is also a 48-year high reading. Additionally, 26% plan to raise compensation in the next three months. 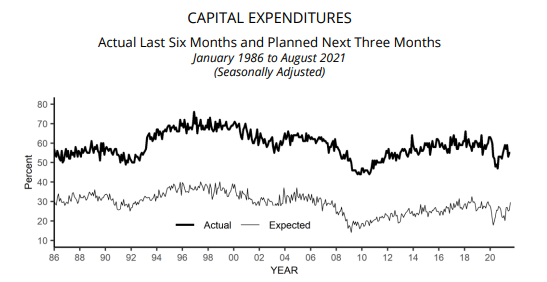 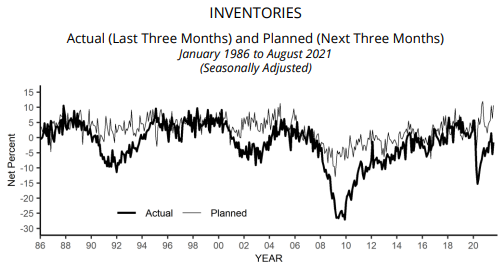 The survey revealed more owners reported declines in inventories than gains and 37% reported supply chain disruptions had a significant impact on business. 11% of owners view current inventory levels as too low and 11% plan on inventory investment in coming months.

The restocking of depleted inventories may allow for a more limited slowing of real GDP growth from the second quarter's 6.6% to a prospective 5% for the third quarter. 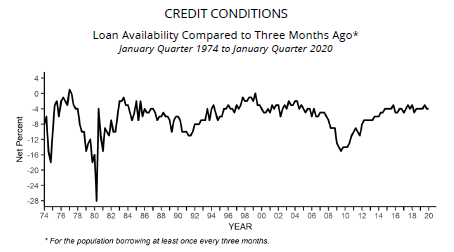 While 63% of the respondents said they had no needs for a loan, 22% reported their credit needs were met, and only 1% reported loans were a top business problem. This indicates favorable credit conditions and suggests the expansion will continue, but the delta variant and labor concerns persist. 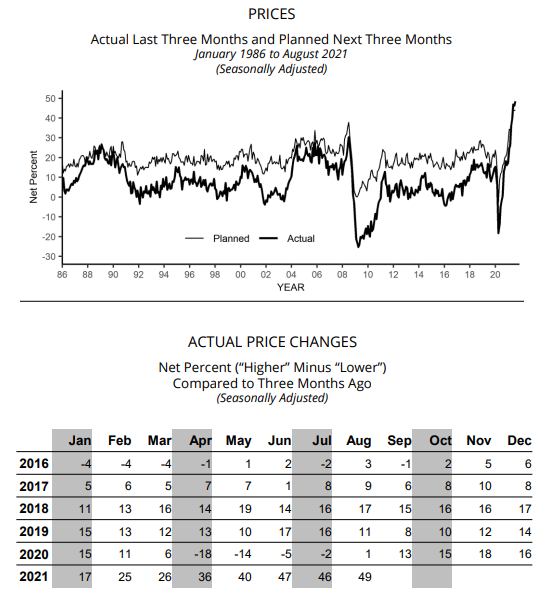 The chart above shows 49% of owners have been increasing prices while 44% plan on price hikes in the future. This may not be a problem for small businesses if they can pass on the rising costs to customers through higher selling prices, but in coming quarters we may see changes in consumer behavior as government subsidies have dried up.

The recent trends of NFIB data are interesting considering the headwinds faced since the pandemic began and many challenges remain. The biggest concern for small business owners appears to be labor and wage pressures that have been created. Widespread shortages of labor are creating an increase in labor compensation as 77% of owners report they have increased wages. The increase in labor compensation has created a scenario in which individuals are getting multiple offers at the same time and then cherry picking the offer they will accept. This contributes to firms reporting that 10% of new hires don’t show up on the first day. For employers, this means higher salaries to retain employees and lower revenue. It also leads to sign-on bonuses and additional incentives to attract applicants. Companies can grant substantial wage increases for reasons unrelated to employee performance. Not only are employers offering compensation for faster consumer price inflation, but some also increase salaries to compensate for an increase in the perceived stressfulness of the work environment.

Shortages of materials have reduced business activity. Half of small business owners report supply chain disruptions have significantly impacted their business and 86% anticipate the disruptions will last another 5 months or more. 15% of respondents indicate sales levels are 50% less than pre-crisis and 18% report sales levels are 51–75% lower.

Small businesses employ over 60 million people, which translates into 47% of the total U.S. workforce and 44% of economic activity. Small businesses create nearly 1.5 million jobs annually and account for 64% of new jobs in the U.S. The chart below highlights the challenges of small businesses to hire workers as the number of openings now exceeds the number of unemployed individuals.

We believe the NFIB optimism results are encouraging, but the concern over the coming quarters is getting people back to work. The Labor Department’s Job Opening and Labor Turnover Survey (JOLTS) shows the number of available positions rose to a record 10.9 million in July. The number of vacancies exceeds hires by 4.3 million, another record, and the number of individuals that voluntarily left their jobs rose to 4 million in July as the quits rate is an astonishing 2.7%.