The Real Reason Facebook Just Went “All In” on the Metaverse

Or Walmart (WMT) said it was developing a new cancer drug…

To many investors, Facebook’s (FB) big pivot is just as big a head-scratcher.

The metaverse is the new “3D internet” we first introduced you to in February.

Facebook changed its name to Meta. It’ll change its stock ticker from “FB” to “MVRS” on December 1. And it plans to spend $10 billion and hire 10,000 people to build out the infrastructure of the metaverse.

You may be thinking…

It makes perfect sense when you consider the business Facebook’s really in.

Facebook grew into the 5th largest company in America because it’s an advertising powerhouse.

Advertising has been a lucrative business for Facebook. It’s made CEO Mark Zuckerberg the 5th richest guy on Earth.

It’s made shareholders rich, too…

Facebook has handed investors 10X their money since 2012… by selling ads on the internet.

At this point, the “regular” internet is saturated with advertising.

That’s why Facebook has its sights on bigger things.

Back in June, Facebook quietly made a genius move…

As I showed you, Facebook announced it would start testing ads in its Oculus VR platform.

Facebook acquired VR headset company Oculus in 2014 for $2 billion. It was Facebook’s first major move in the virtual reality space. 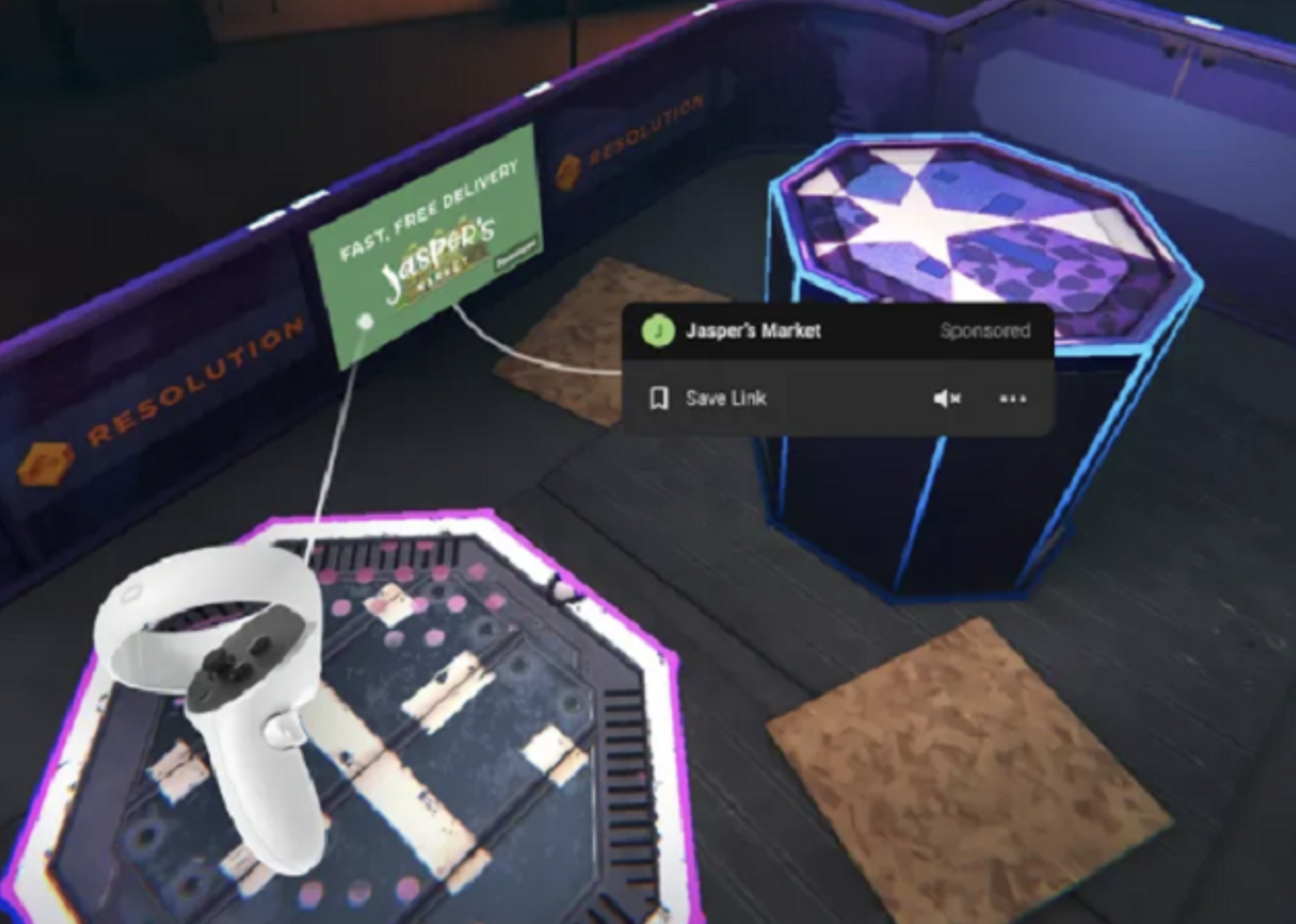 As I said in June, there’s a huge pot of gold waiting for the company that figures out how to profitably advertise on VR and augmented reality: both key technologies needed to access the metaverse.

In short, Facebook is gearing up to dominate this entirely new world of advertising.

And please understand… advertising in the metaverse isn’t some outlandish prediction.

The world’s biggest brands are entering the metaverse in droves…

If you’ve been following my work, you know exactly what I’m talking about.

Luxury brands Gucci and Louis Vuitton are already marketing inside the metaverse. A virtual Gucci bag sold for more money in the game Roblox than its physical version did in real life. And Louis Vuitton has made virtual outfits for League of Legends characters.

Warner Bros. and Hyundai have built their own virtual worlds in the metaverse. Coca-Cola (KO), Anheuser-Busch (BUD) and Crockpot have started selling their own non-fungible tokens (NFTs), or digital goods. Coca-Cola’s first NFT auctioned off for $575,884.

At the same time, Sephora and HBO are experimenting with how to use augmented reality (AR) and virtual reality (VR).

NASCAR also partnered with metaverse platform Roblox (RBLX) to brand itself in front of younger audiences. Players will be able to outfit their video game characters in custom NASCAR uniforms.

A couple weeks ago, Nike (NKE) filed seven trademark applications as it prepares to enter the metaverse. The company will make and sell virtual branded sneakers and apparel.

The metaverse is jam-packed with innovative marketing potential.

The possibilities in this hybrid digital/physical world are endless.

There’s a ton of money up for grabs as advertising migrates from the “regular” internet to the metaverse.

One easy way to profit is by buying the metaverse fund META.

It holds a basket of companies that have a presence in the metaverse, including Facebook, chip maker Nvidia (NVDA), and Microsoft (MSFT).

You can see that META recently broke out to new all-time highs. Since then, it’s been on an absolute tear. 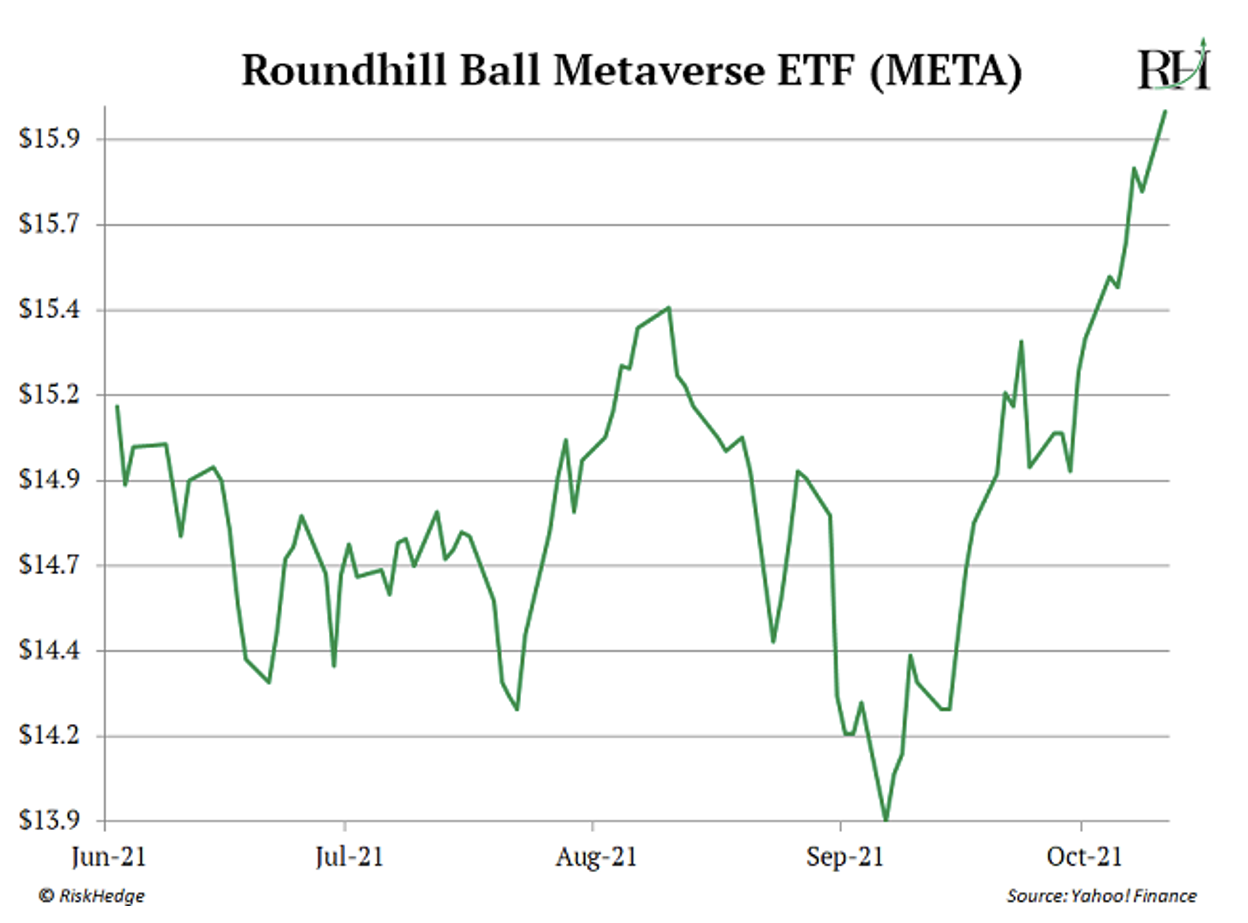 This is incredibly bullish for metaverse stocks as a whole. But let’s face it…

So, I suggest focusing on smaller metaverse stocks.

Related: 3 Ways to Profit From the Total Disruption of Real Estate