Do rising interest rates matter to the stock market? Many in the financial media and advisory community are scrambling to locate periods where rates rose along with stocks. Has it happened? Absolutely. However, it was only a function of timing until it mattered.

Let’s start with the narrative.

Hedge fund manager Bill Ackman is worried about the impact of rising interest rates on his portfolio: 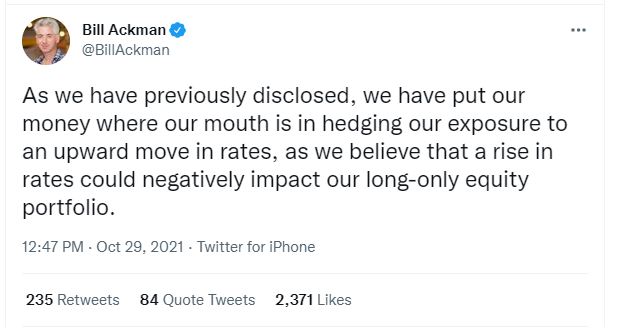 History shows Ackman’s worries about his long-only portfolio could be misplaced though. Earlier this year I looked at the relationship between rising interest rates and stock market performance: 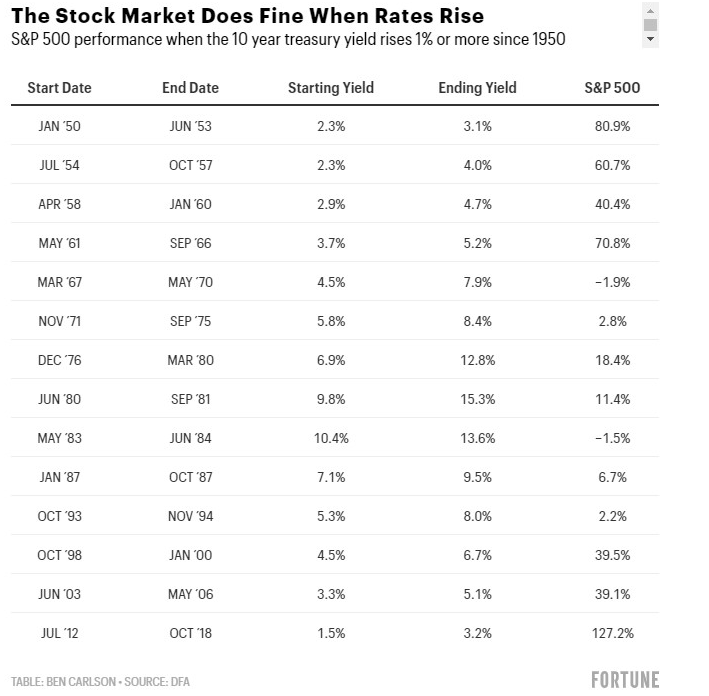 The table shows periods where interest rates were rising and the relative return of stocks during those periods. As Ben notes:

There have only been two instances where stocks fell during a rising rate environment. In fact, the annualized returns in each of these periods where rates rose 1% or more was 10.5%, which is right around the average long-term return for the U.S. stock market.

While he is correct, the problem with the analysis is that it doesn’t go far enough to tell you what happened next.

The Long-Term View Of Rates & Stocks

The chart below is the monthly “real,” inflation-adjusted return of the S&P 500 index compared to interest rates. The data is from Dr. Robert Shiller, and I noted corresponding peaks and troughs in prices and rates. The data is a bit cluttered when looking at it in this manner. However, even an untrained eye can pick up that spikes in interest rates led to unfavorable outcomes for stocks.

To try and understand the relationship between stock and bond returns over time, I took the data from the chart and created the table below of 46 periods over the last 121-years. What jumps is the high degree of non-correlation between 1900 and 2000. As one would expect, in most instances, if rates fell, stock prices rose. However, the opposite also was true. The chart below shows each of the 46-periods graphically. The historical non-correlation changed in 2000, and rate movements and stock prices became correlated. The only change that explains this immediate switch from non-correlation to correlation is the Federal Reserve.

The Fed Changed The Correlation

While many focus on the Federal Reserve’s interventions beginning in 2008, the Fed was becoming more active in stabilizing financial markets under the guidance of Alan Greenspan. From bailing out Long-Term Capital Management to sharply dropping interest rates during the “Dot.com” crash, the early experiments of monetary policy formed. Importantly, for investors, “don’t fight the Fed” became a mantra.

Then in 2008, with the invention of “Quantitative Easing.” the evolution of monetary policy became complete and cemented the stock/bond relationship. As investors became trained that monetary policy would push asset prices higher, investors sold bonds (risk-off) to buy stocks (risk-on.)

While Ben’s table above is correct, what it lacks is what came next. In EVERY period where rates and stocks both rose, most of those gains got forfeited as interest rates slowed economic growth, reduced earnings, or created some crisis. In the short term, the economy and the markets (due to the current momentum) can  DEFY the laws of financial gravity as interest rates rise. However, as interest rates increase, they act as a “brake” on economic activity. Such is because higher rates NEGATIVELY impact a highly levered economy:

I could go on, but you get the idea.

Related: How Do You Trade This Off-the-Charts Bull Market?