The Market Is Looking Through Hot Inflation, For Now

This past week saw some doozy inflation readings beginning on Wednesday with the CPI reading and then again on Thursday with the PPI. CPI came in at 4.2% year-over-year, but a whopping 0.8% month-over-month. For context, 0.8% MoM implies 10% annualized inflation! The PPI was also hot, coming in at 6.2% YoY and 0.6% MoM.

But here’s the thing. The Federal Reserve has been telling the whole world inflation will be transitory and a few hot readings will not bring forward rate hikes. A number of Fed speakers went on record last week saying as much…and then again after this week’s inflation reports. As we have been saying for weeks now, the market has gotten ahead of itself in expecting the Fed to tighten policy at a faster rate than the Fed itself has been communicating.

That may have started to change this week. In reviewing rate hike expectations as priced by the Fed Funds market and the eurodollar market, the extremely hot inflation readings did not do much at all to market expectations for rate hikes. In the case of the Fed Funds, the market went into the week pricing 40bps of hikes in 2023 and ended pricing 44bps of hikes. In the case of the eurodollar market, it went into the week pricing 92bps of rate hikes, and also ended only a few basis points from that level. Given the magnitude of the CPI and PPI overshoots, we would have expected the bond market to start expecting a much faster rate of Fed tightening, but that did not happen to the extent we would have expected.

All this tells us that the market…maybe…just maybe…is starting to believe the Fed when they say they will continue asset purchases for “some time” and that liftoff for the Fed Funds rate will not start until the back part of 2023. Of course, a few more inflation readings like we got this week and that could start to change.

Let’s assume for a second that the Fed does what it says it will do and that inflation continues to come in strong. All else equal, this would tend to suppress interest rates below their “natural” level and create even more negative real interest rates. As the reader can see in the chart below, the 10-year real interest rate based off of CPI is already at a 40-year low (T-bond yields are 1.64% and inflation was 4.2% YoY).

Of course, some of the YoY inflation number was due to base effects – comparing strong inflation this year to weak inflation last year. But much of it was not. As mentioned earlier, the MoM reading was a red hot 0.8%, or 10% annualized. The 3-month annualized rate was 7.5%, the second highest reading outside of a recession since 1980! That is to say, there appears to be plenty of near-term inflation momentum that is entirely separate from base effects. This argues for more hot inflation numbers to come and a persistently negative real interest rate…so long as the Fed sticks to its narrative and the market continues to buy in. 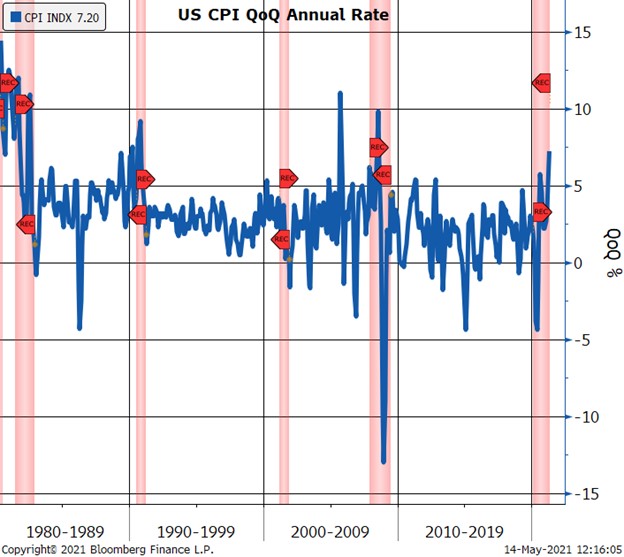 Related: If Everyone Sees It, Is It Still A Bubble?