Container Ship Operators Are on a Tear as Freight Rates Skyrocket

For the past 20 years, the Port of Los Angeles has been the busiest seaport in the Western Hemisphere, responsible for exporting commodities such as soybeans and raw cotton and importing everything from furniture to electronics. In 2020, container volume reached 9.2 million 20-foot equivalent units (TEUs), with total cargo handled valued at $259 billion.

Last month, the Port of L.A. saw an incredible 47% increase in container traffic compared to February 2020, representing the strongest February in its 114-year history. The port processed nearly 800,000 TEUs during the month, marking the seventh straight month of year-over-year growth. 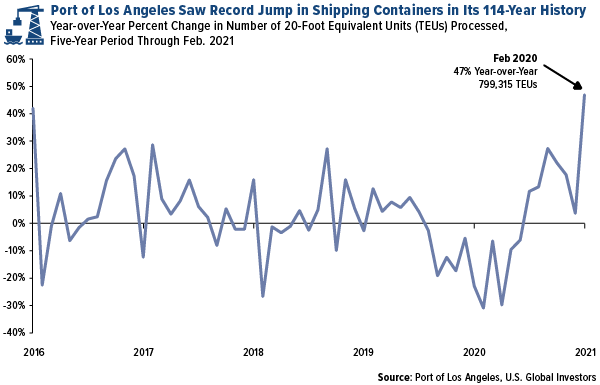 Granted, last February was near the beginning of the lockdown in China, America’s biggest trading partner. Growth was therefore all but guaranteed a year later.

Here are just a couple more examples of what I’m talking about: On the East Coast, the Port of New York and New Jersey saw not only double-digit container traffic growth in January compared to last year but also its highest January on record for volume. In China, volume at major Chinese ports were up 14.5% in the first half of March versus the same period last year.

This heightened trade activity is leading to a number of supply-demand imbalances that are ultimately pushing up freight rates, benefiting container ship operators.

Congestion at ports is on the rise, leading to longer wait times. According to S&P Global Platts, turnaround times at the Port of Singapore have increased from around two days to as many as five or even seven days. Some retailers are reportedly paying more to have goods flown by air cargo to the U.S. to bypass long port delays. Demand for new shipping containers has outpaced new orders, leading to a global shortage.

Again, this is all putting massive upward pressure on rates. For the 12-month period through March 19, global container rates jumped nearly 195%, from an average of $1,377 per 40-foot container to $4,045.

Among the routes with the biggest year-over-year increases was China/East Asia to North Europe. The cost to ship a single container from Shanghai to Rotterdam rose an astonishing 418%, according to Freightos data. (I expect these rates to go up even more due to the recent logjam in the important Suez Canal caused by a lone container ship run aground.) 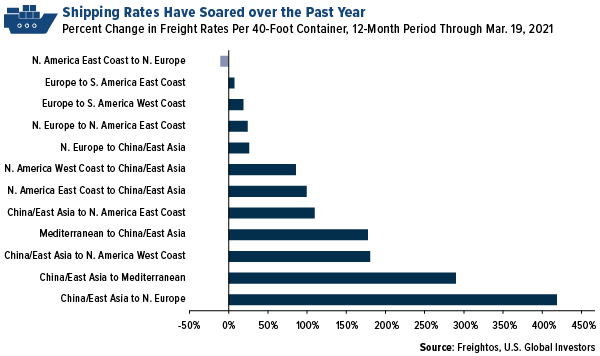 What’s been a huge headache for importers and exporters has been a boon for investors of shipping stocks.

Dry bulk stocks were the best performers, up 50.4% year-to-date through March 19, among the sectors tracked by maritime research and consulting firm Drewry.

According to Drewry analyst Ishan Dafaria, the second week of February was the best week of the 21st century for the derivative dry freight market, with trading volume exceeding $1 billion.

The current rally, which began in December 2020, “has defied the usual trend of a seasonally weak first quarter,” Dafaria writes.

Among the best NYSE or Nasdaq-listed cargo stocks were Golden Ocean (up 65.4%), Scorpio Tankers (77.5%), Diana Shipping (84.0%) and Star Bulk Carriers (91.1%). Microcap Navios Maritime Holdings, with a market valuation of only $140 million, was the top performer, up a jaw-dropping 456.9% year-to-date, on news of its merger with Navios Maritime Containers.

But Is the Rally Sustainable?

That depends on who you ask of course, but many analysts right now see freight costs remaining elevated for a year or more as consumer demand and capacity stay tight.

That includes McKinsey & Company’s Ludwig Hausmann, who told Bloomberg recently that he sees prices staying high “for the next one or two years” due to a lull in price wars and the fact that many shippers have already locked in long-term contracts.

Analysts at UBS and Morgan Stanley are likewise bullish on the industry, with UBS’s Tom Wadewitz saying he sees a “perfect storm” for freight demand right now thanks to tight capacity, inventory rebuilding and ongoing fiscal stimulus. His economic team believes spending on goods is “well supported” through the second quarter of 2022.

As we come out of the pandemic, many assets are on the rise, including commodities, energy, home valuations and more. With so much economic activity coming back online, it only makes sense to me that container ship operators will see some of the biggest gains as a result.