Zillow is America’s go-to website to look at homes for sale.

And we’ve all checked out “Zestimate,” which estimates how much your house is worth.

But a few years ago, Zillow jumped into a new business…

The business of buying and selling homes instantly, sight unseen.

Imagine selling your home without listing it on the market?

No open houses… no negotiation… no waiting months for the buyer to come up with the money.

And all with a few taps on your smartphone.

That was Zillow’s vision.

Just type your address into Zillow’s app… submit a few photos… and Zillow would make you an offer within a couple of days.

Zillow jumped headfirst into iBuying back in 2018…

Instead Zillow failed… and it’s slinking away from iBuying with its tail between its legs.

In short, Zillow couldn’t make money “flipping” houses. It lost an average of $29,000 a home in Phoenix, for example.

Zillow’s stock has cratered 30% since announcing its iBuying exit: 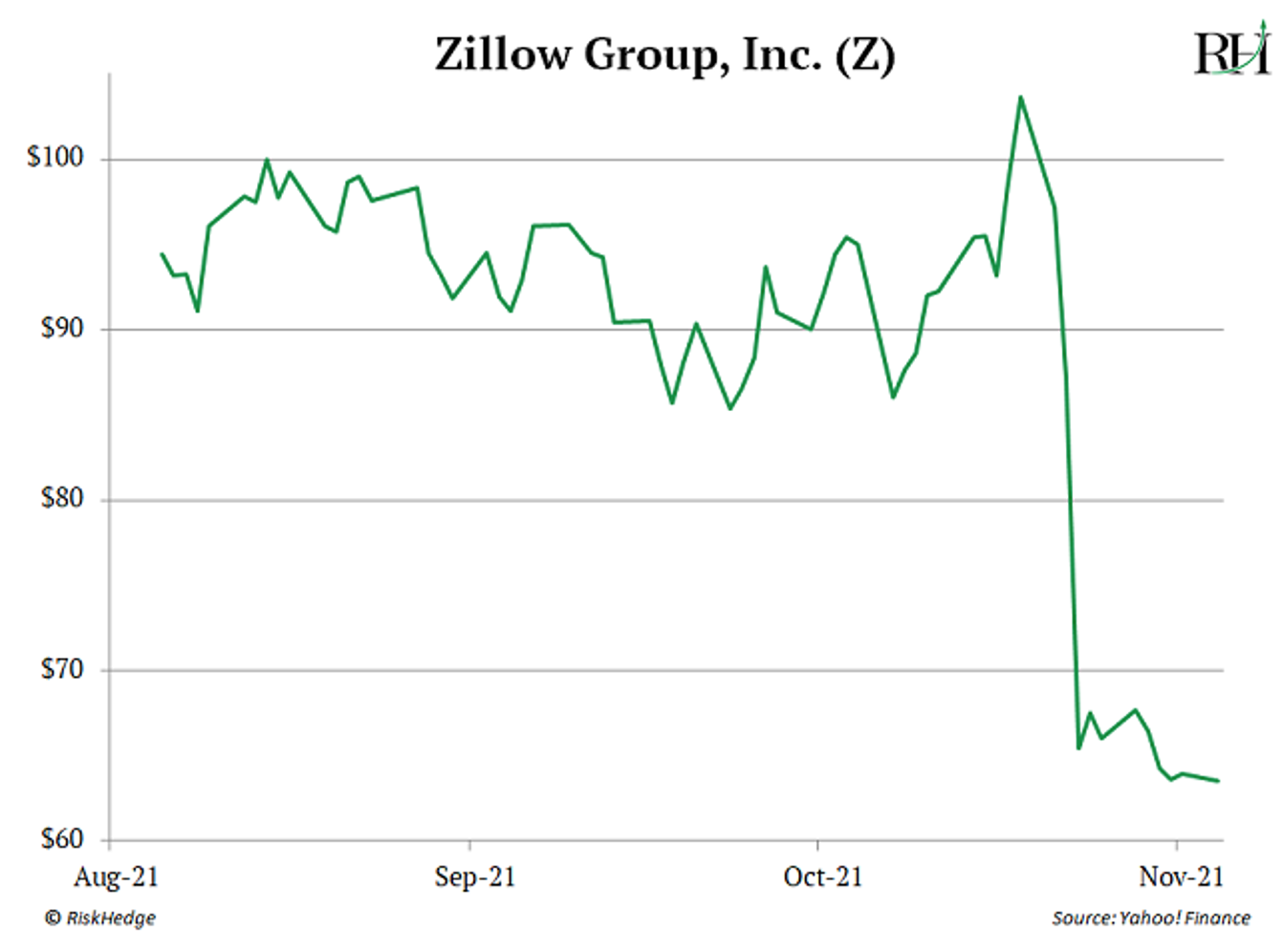 I’m on record saying: “iBuying will transform how we buy and sell homes over the next decade.”

Does Zillow’s blowup mean I’ve got it all wrong?

Is iBuying a terrible business?

As I mentioned, Zillow bled almost $30k on each house it flipped in Phoenix. Opendoor is in Phoenix too. Yet it’s raking in an average profit of $4,000 on each sale.

How did Opendoor succeed when Zillow failed?

Zillow is the place you go to see photos of your neighbor’s house. It’s the website you visit when you want to check how much your home is worth.

But the company had no experience buying or selling homes. It dived into a business it knew nothing about.

Opendoor was built from day one to value a home… buy it… and sell it for a profit.

In other words, it was laser-focused on iBuying from Day 1.

What can investors learn from Zillow’s blowup?

It pays to bet on industry pioneers like Opendoor.

But it’s just as important to avoid the “copycats.”

Zillow is the latest example of a company jumping into a business it knew nothing about and failing.

For example, Ford (F) and General Motors (GM) have been trying to make electric cars for decades. Remember Ford’s battery-powered Ranger from the late ‘90s? It sold a measly 1,500 trucks before scrapping the idea.

Problem was… automakers that spent 100 years perfecting engines and gearboxes had no expertise in building battery-powered cars.

Then Tesla (TSLA) burst onto the scene with one goal in mind: building affordable EVs that drove hundreds of miles on a single charge.

Tesla is now worth more than Ford, GM, and the next seven largest automakers, combined.

Or do you remember Google’s attempt at creating a social network?

Instead… according to Google, the average user abandoned Google+ after just five seconds of use.

Google Search is one of the greatest products in history. But social networks are a whole different ball game. Google wasn’t built to run one.

Zillow’s blowup is all over the news right now.

But remember: This isn’t an iBuying problem… it’s a Zillow problem.

Opendoor is firing on all cylinders. It launched in five new markets in the past few months. Homeowners in 44 locations across America can now sell their homes by clicking a few buttons on Opendoor.

Opendoor will buy your house sight unseen. And it’ll wire the cash into your bank account in as little as three days.

Compare that to the traditional route, which averages two months from listing to closing.

Unlike Zillow, Opendoor has been doing this from the beginning. And I don’t see its business slowing down anytime soon.

Now is a great opportunity to invest in iBuying.

Real estate is one of America’s biggest, most lucrative markets.

Over $1.7 trillion worth of US real estate changes hands every year.

The company that takes iBuying mainstream has the potential to be worth $1 trillion. Opendoor pioneered this business and is the clear leader.

Have you dealt with iBuyers or traditional realtors recently? I want to hear your stories at Stephen@riskhedge.com.