An Ill Wind Blows From the East

“History doesn't repeat itself, but It often rhymes” — Mark Twain

Once again we are faced with a military conflict in Europe with far-reaching impacts not only on a human scale, but on an economic and credit one as well.

Borrowers in North America may soon see the run of remarkably favorable financing conditions come to an end as intersecting credit headwinds could result in pronounced downside effects. While the region is comparatively insulated to the effects of Russia’s war on Ukraine, it is not immune to the fallout. The war — and the political response of the West, mostly through sanctions — has already sent food and energy prices soaring and has raised concerns about an economic slowdown or even recession during a time of already rampant inflation around the world. In the United States, for example, inflation is at a level not seen in 40 years.
On top of heightened geopolitical risks and worsening cost pressures and supply bottlenecks, we see a high risk that investors could soon demand significantly higher returns. This could result in the repricing of financial and real assets, higher debt-servicing costs, and tighter financing conditions. Credit markets have begun an about-face — kicked off by the aggressive tone of Fed policymakers and followed up by Russia’s invasion of Ukraine. Nominal yields on U.S. corporate debt have risen quickly, returning to pre-pandemic levels in less than three months, which has kept many issuers on the sidelines.
Benchmark 10-year Treasury yields have climbed to test their four-decade downtrend using a logarithmic scale. They rose above 2.80% this week, with the trendline sitting around the 2.83% level. A Bloomberg total return gauge of Treasuries has slumped almost 8% this year, on track for its worst decline since at least 1974.

S&P Global Economics now believes that the effects related to the Ukraine crisis will shave 70 basis points (bps) from U.S. GDP growth this year, with the economy now set to expand 3.2%. The prospects of steadily rising interest rates and persistent inflation are the main drivers of this assessment. Many economists are growing increasingly gloomy about the future, with the majority now predicting that stocks will fall into a bear market this year and the U.S. economy will be plagued by stagflation — meaning high inflation and slow economic growth — according to Bank of America’s (BofA) latest Global Fund Manager Survey. Meanwhile, the survey by BofA Securities shows that optimism among fund managers over global economic growth has hit an all-time low while concerns of possible stagflation have risen to the highest since August 2008 — not conducive to a supportive credit environment if this comes to fruition.

Most notably, the war in Ukraine has increased a broad range of commodity prices. Commodity prices have risen sharply, particularly given the significant role of Russia and Ukraine in the production of multiple commodities, including fossil fuels, wheat, nickel, gold, and aluminum. The supply disruptions to key commodities have in turn stoked broader inflation risks. It appears that the war in Ukraine is starting to dampen economic activity by exacerbating price pressures and supply shortages and accelerating the tightening of financial conditions to control the resultant inflation.

The latest data show that economic activity has slowed, albeit from a position of relative strength in most of the G20’s (The Group of Twenty is an intergovernmental forum comprising 19 countries and the European Union) nations, as the jump in commodity prices erodes consumer spending power and sentiment.

It is also noteworthy that central banks are under pressure to adopt a more aggressive monetary policy stance as inflationary dynamics bring fresh challenges. Many major economies are in a tightening mode. 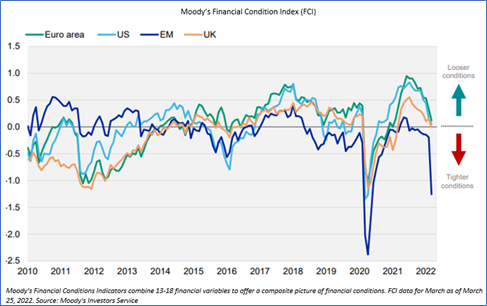 Given the increasingly challenging economic backdrop as supply chain disruptions worsen and the Fed frontloads interest rate hikes, forecasts for GDP growth continue to weaken. Additionally, S&P assesses the risk of recession in the next 12 months as 20%–30%. A potential downside scenario sees U.S. growth slowing to 1.4% in 2023 on worsening supply chain disruptions, amplified by the war in Ukraine and a spike in prices, particularly for food and energy, forcing the Fed to tighten faster than it expects, repricing risk.

So, what does this mean for fundamental credit? The war in Ukraine has caused, as previously mentioned, a widespread surge in commodity prices. According to the World Bank, energy prices surged 24.1% in March, led by crude oil (+20.2%), coal (+49.9%), and natural gas. Non-energy prices gained 8.1%. Over the past 12 months, energy commodities jumped 101.6% and non-energy commodities 31.7%. Among key subgroups, agriculture commodities jumped 7.2%, fertilizers and minerals 7.7%, and precious metals 5.3%.Crude oil is Russia’s biggest export. The war in Ukraine has focused attention on Russia’s global exports. Russia is a key supplier of not just oil and gas, but also wheat, metals and fertilizers. Most of these products now have near worldwide sanctions. 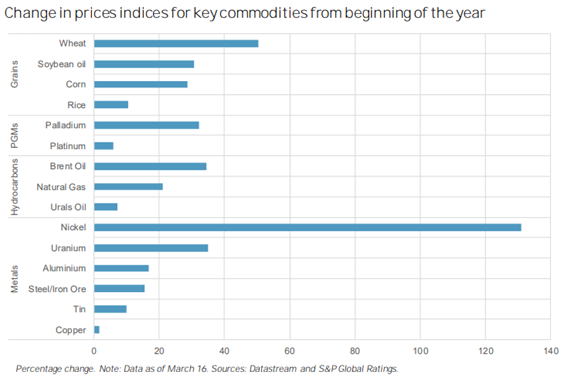 It would appear that non-Russian-related companies that provide these commodities (gold, iron, oil, etc.) are actually poised to benefit as increased sales prices result in strong increases in cash flow and lower leverage. Those that depend on oil/fuel or other end-product derived from these commodities may be negatively impacted. E&P (exploration and production) companies should benefit from skyrocketing oil and related product price jumps.

For example, the impact for the steel industry should be positive balancing increasing steel prices with harder-to-procure raw materials. Sentiment for finished steel prices has continued to improve in the U.S. in April, with U.S. steelmakers announcing price increases as raw material prices continue to rise following Russia's invasion of Ukraine, along with rising transportation and fuel costs. Strong credit metrics are likely to get stronger given high spot prices along with contract price resets, solid demand from the industrial, construction and energy sectors and inventories of raw materials bought when prices were lower. However, the recent spike in HRC (hot rolled coil) prices followed a surge in raw material costs. Russia and Ukraine are both sizable exporters of steel inputs such as pig iron, metallurgical coal, iron ore and steel scrap, as well as semifinished and finished steel products, oil, and natural gas. These countries are now unreliable sources because of Russia's invasion, resulting in prices for the materials surging in the past month. Meanwhile, lower exports of semifinished steel products and higher energy costs have led to production curtailments and lower finished steel supplies in other markets. This, coupled with rising freight costs, meant lower exports to the U.S. and better domestic supply/demand fundamentals pushing steel prices higher. Steelmakers that control material supplies (such as pig iron, iron ore) would appear to be better off while those operating electric arc furnaces could be at a disadvantage once their current raw material inventories are consumed, since the price of pig iron and scrap have surged, and shortages are possible. 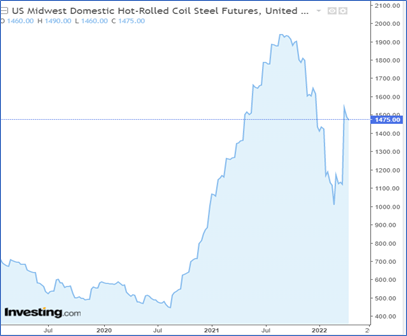 Airlines have not yet been hurt by increasing costs of jet fuel due to the strengthening demand for air travel as bookings remain strong and price increases have been successfully passed on to passengers. The COVID rebound is still in place. Moody’s believes the strong demand for air travel will support ticket purchases despite higher airfares while Brent oil near or below $120 per barrel will not materially impair demand/bookings through 2022. But fare increases will need to range between 9% and 13% compared to average fares in the fourth quarter of 2021 to cover higher fuel prices. That said, Moody’s acknowledges that risks are clearly rising for the sector because of the military conflict and exacerbated inflationary pressures. Moody’s concludes that increases in Brent oil prices or its price being sustained persistently above $130 per barrel will lead to demand destruction. 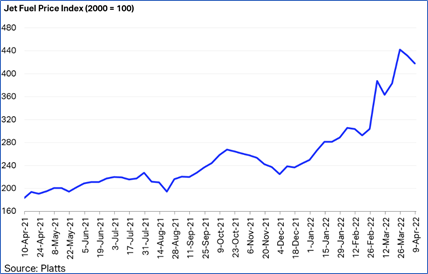 Non-Russian based fertilizer companies appear to be well positioned as the supply of hydrogen and nitrogen products used in fertilizers is now dislocated. Those companies not reliant on Russian raw materials or those that produce fertilizer should benefit from the sanctions imposed on Russia, which had been a large supplier of the product and raw materials. Of course, this does not bode well for the farming industry.

While the U.S. services sector is entering the second quarter on strong footing as indicated by the ISM’s (Institute of Supply Management) nonmanufacturing composite index rose 1.8 percentage points to 58.3 in March, above its neutral threshold of 50 and its historical average of about 55. Price pressures are building as the ISM prices paid index inched higher just 0.1 percentage point shy of its all-time high set in December. 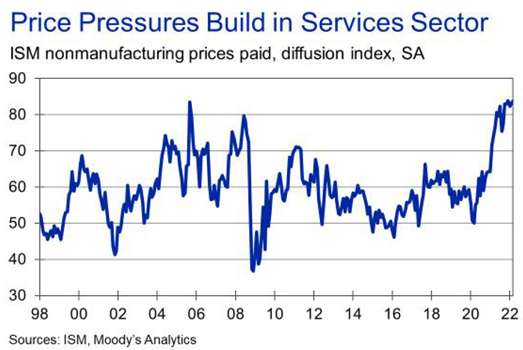 As recessionary pressures build aggravated by Russia’s war on Ukraine, it has the potential to inevitably lead to slower consumer spending negatively impacting most sectors of the economy.

In conclusion, the credit landscape is changing and there will be new winners and new losers. A fundamental credit analysis of impacted sectors and companies is becoming more essential than ever.

Related: Don’t Get Steamrolled by the Fed