Three Investment Lessons for My Son

My wife and I recently welcomed our first son into the world. We named him Rí (ree), which means “king” in Irish. He’s doing great, settling into home life with his big sister. Right now his only job is drinking bottles of milk and sleeping. But one day he’ll start asking grown-up questions like, “What’s the stock market and how do I invest?”

When I was little nobody ever sat me down and taught me about stocks. Now that I have two kids, I’ve been thinking about what a dad should teach his children about money and investing. I’m not talking about specific tips or tactics or even what types of investments to buy. But the truly “big stuff.” The two or three money principles that really move the needle.

If I can ingrain these principles in my kids, I’ll know I’ve done all I could to set them up for a wealthy life. As I’ll show you, there is a “Big 3.” Nail the Big 3, and everything else in your financial life slots into place.

You’ve likely worked hard all your life. It’s allowed you to own a home, and live a happy life. But I bet you also have an eye on creating a solid foundation for your kids. You might call this building generational wealth, a legacy that extends beyond your lifetime.

The problem with lasting wealth is you have almost no control over what your children will do with the money once you’re gone.  How do you set them up for success? Teaching your kids the Big 3 while you’re still around will help them build on your achievements. So if you have kids and grandkids, please share this letter with them too.

Saving money is the foundation of wealth, and a prerequisite to investing. Before you even think about investing, you first have to save a lot. If you don’t put money aside you’ll never be able to buy stocks. This is hardly groundbreaking advice. Telling someone to “save money” is like a fitness guru advising you to eat healthy and exercise. Both sound obvious. Yet it’s impossible to achieve success without them.

Americans spent $37 billion on gym memberships in 2019. Yet a recent Harvard study estimated roughly 4 in 10 Americans are obese. What gives? A study published in The American Journal of Clinical Nutrition found exercising makes you feel like you did something healthy, which leads folks to rationalize a post-workout food binge. Eating pizza after sitting on the couch all day might bring guilt. But scoffing junk food after running five miles feels justified.

The same happens in our financial lives. Spending more when, say, you get a raise is as tempting as eating junk food after exercise. It feels earned. But as my grandad used to say, “When your outgo exceeds your income, your upkeep becomes your downfall.”

For example, imagine you could only choose one of these for your kid:

#1: They’re a high earner but spend every penny.

#2: They get a decent salary and save a lot of money.

I’d choose #2 every time. How much you earn is important, but it’s not nearly as important as how much you save. There’s a big difference between making a lot of money and becoming wealthy. The gap between what you earn and what you spend is what really matters. This pile of cash is what allows you to invest.

I’m not telling you to be a penny pincher. Nobody likes the miser who’s afraid to spend a dime. You can enjoy a cup of coffee and family vacation while still saving. And you should get started today.

In his recent book, retirement expert Charley Ellis highlighted how important it is to start saving when you’re young. He found folks who began saving at 25 rather than 45 cut their required annual saving rate by two-thirds. In other words, these folks can save 65% less than older savers each year and still build a dream retirement.

Step #2: You Gotta Own Stocks

Mary and Larry took a gamble. In 1997 the couple bought two shares of a new company selling books online. It was a little-known Seattle startup called Amazon.com (AMZN), trading for around $20/share.

Mary and Larry’s $40 investment is now worth roughly $160,000. The couple sent Amazon founder Jeff Bezos a letter saying: “Those two shares have had a wonderful influence on our family… we wish we had bought 10 shares!”

I’ve told you before that starting a successful business is the single best way to get rich. Bezos, who’s now worth $196 billion, is the perfect example of this. But you don’t need to build the next trillion-dollar empire to get rich. You can “piggyback” on great CEOs by buying shares of their companies on the stock market, just like Mary and Larry.

The US stock market is the greatest money-making vehicle in history. You must own a piece of it. A 2020 study from Arizona State University found: “Investments in US stocks improved the wealth of shareholders by over $47 trillion dollars between 1926 and 2019.”

For over nine decades US stocks have handed shareholders $500 billion in profits each year, on average. That’s enough to cut every American a $1,500 annual check for their entire lives.

I told you saving is the foundation of wealth creation. This is the first step—but it won’t make you rich. Shortly before he died, Vanguard founder John Bogle said: “I think whatever your view of the world is, you have to invest. You can’t put the money in the mattress and in this day and age of low interest rates, you can’t put it in the money market fund or a bank CD, so invest, you must.”

Throwing money into a CD account was a good option when banks paid you 5%. Today the average one-year CD rate is a measly 0.18%. Meanwhile the value of our hard-earned savings is constantly eaten away by “inflation.” The US government’s own calculations show a dollar is worth 16% less than it was 10 years ago. And nearly 90% less than it was 50 years ago!

These days owning a piece of a successful business, aka owning stocks, isn’t a “nice to have.” It’s a must. Buying stocks is one of the best ways to beat inflation.

Higher costs are bad for you and me, but can be good for businesses. They’re able to pass on higher costs to customers, which can boost profits… and their stock price. Investors who simply bought and held the S&P 500 have stayed ahead of inflation.

Think of being a shareholder like having a lucrative second job without the hard work. With this “second job” you earn money when you’re sleeping, when you’re on vacation, and when you’re retired.

Think about buying Amazon shares, for example. Every time the disruptor bulldozes through another industry and its stock soars, you get a slice of the profits. When it crushes earnings and Jeff Bezos’s net worth surges, it means you win, too

Step #3: You Gotta Own the Megawinners

Just owning stocks isn’t enough. You must own the right stocks: the megawinners.

Let me explain. About 150 years ago whaling was one of America’s most important industries.

Electricity hadn’t been invented. To light up streets and homes at night folks burned highly-flammable whale oil. By 1850 whaling was America’s fifth-largest sector, and it paid extremely well. Just a few thousand whalers earned the modern-day equivalent of $27 billion in one year.

But most voyages never made a dime. A few years ago, Chicago University researchers wrote a book about the US whaling boom: In Pursuit of Leviathan. They analyzed 4,000+ voyages and found one-third of whalers actually lost money. The top 1.7% of whalers generated almost all the returns.

What if I told you the same is true in modern-day investing? Look at the venture capital (VC) industry, for example. Most venture-backed startups fail. A small portion do okay. But only a handful turn into multibillion-dollar winners.

In VC: An American History, Tom Nicholas compared VC returns over the past few decades to whalers 150 years ago. And they look eerily similar. Roughly one-third of funds lost money, and only a tiny fraction hit it out of the park, as you can see here: 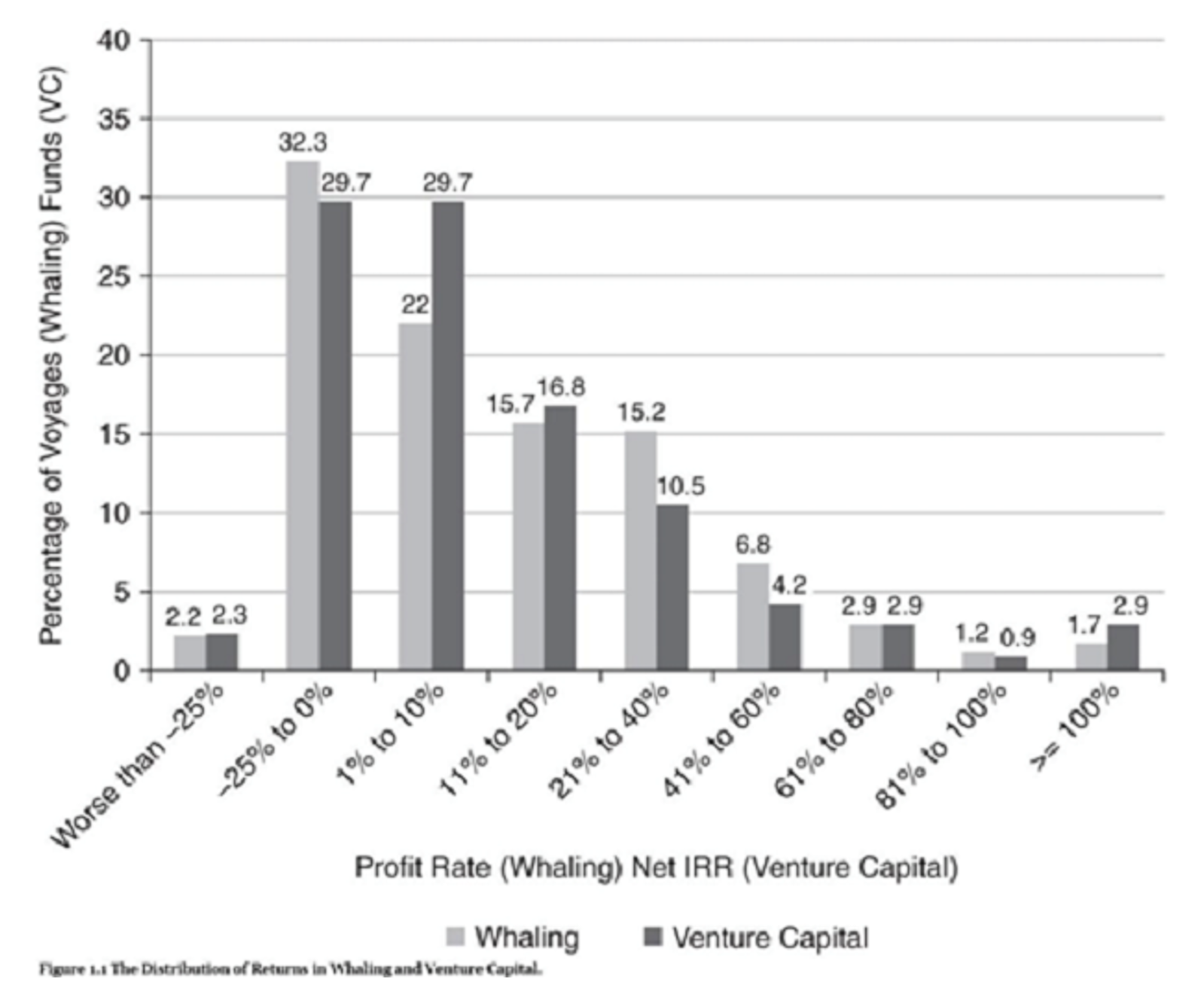 Tons of losers and a few big winners. The US stock market follows the same pattern. JP Morgan Asset Management found almost half of stocks suffered a “catastrophic loss” from 1980 to 2020. Meaning they plunged and never recovered. Another 26% of stocks produced returns lower than the overall market.

Effectively, all the market’s returns came from just 10% of stocks, which JPMorgan called “megawinners.” Whether you’re measuring 19th-century whaling, early-stage startups, or large stocks, the results are all the same. Lots of losers and a few big winners.

This is why picking individual stocks isn’t for everyone. In fact, many folks are better off owning a broad basket of US stocks, or buying indexes. By simply owning the S&P 500 ETF (SPY), you would have doubled your money over the past five years. That’s a good, stress-free option.

But investors who really want to accelerate their wealth creation must go on the hunt for these “megawinner” stocks. You can build lasting wealth through owning great disruptive businesses. In other words, back companies changing the world and transforming huge industries. Businesses that achieve this regularly turn out to be megawinners that can hand you many times your money.

Related: An Investing Truth: Roughly 80% of Stocks Are “Duds”