He recently signed an executive order for half of all new car sales in America to be electric by 2030.

This is great news for electric automakers like Tesla, right?

Just as gas guzzling cars made early Ford and GM shareholders rich, the transition to electric vehicles will do the same for a new class of EV stocks.

But I don’t recommend buying Tesla, or any other automaker, today.

There’s an even more lucrative way to profit from the coming electric car boom. One that will help you make money no matter who wins the EV race.

This stock has already handed Disruption Investor members 200%+ gains. And my research shows it could triple again as electric cars go mainstream.

Did you know EV sales are smashing all kinds of records?

That’s even more impressive when you consider sales of gas guzzlers fell 16%. This momentum has continued into 2021, with sales in the first quarter quadrupling.

Elon Musk’s Tesla has been the only game in town when it comes to high-performance electric vehicles. It’s also been one of the best-performing stocks over the past two years, handing out 1,400% gains.

Now the old guard is finally jumping into the ring.

Ford’s electric F-150 truck goes on sale next year. The first battery-powered Cadillac is expected to hit the roads in 2022, too. GM will debut a rechargeable Hummer later this year. And get this… Mercedes-Benz announced it’s going all electric by 2030.

So which auto stock should you buy?

The answer is none of them.

When you pop the hood on an electric car, you won’t find an engine.

They run on batteries, like the one in your smartphone… only 10,000X more powerful.

The battery is by far the most critical part of an EV. It determines how far you can drive before you have to “refuel” at a charging station.

A decade ago most EVs couldn’t travel 70 miles before you had to plug it in to a socket. And it took up to eight hours to fully charge.

Today high-end EVs like Tesla’s Model S go well over 300 miles before you have to plug them in. And Tesla’s new superchargers can fill the battery up to 85% in under an hour!

In short, big breakthroughs in battery technology are the reason there are now 10 million EVs driving on the world’s roads.

One critical metal made these achievements possible.

Batteries powerful enough to run a car for 300 miles must be able to store huge amounts of energy. But they also have to be relatively lightweight.

There’s always a tradeoff between size and power with batteries. It would be great if your cell phone held enough power to last a whole month. But the battery would be the size of your fridge.

Lithium-ion batteries have been around for decades. They power our wireless earbuds… smartphones and laptops. But now we’re moving from phone sized batteries to car sized batteries.

Remember, so far Tesla has been all alone in the high-performance electric car arena. Soon every automaker on the planet will join in. We’re already seeing it happen with Ford, GM, and Toyota. And they’ll all need to buy boatloads of lithium.

In fact, by 2030, electric vehicles will need as much lithium as 250 billion iPhone batteries. That’s a 14X spike compared to all the lithium the world uses today! 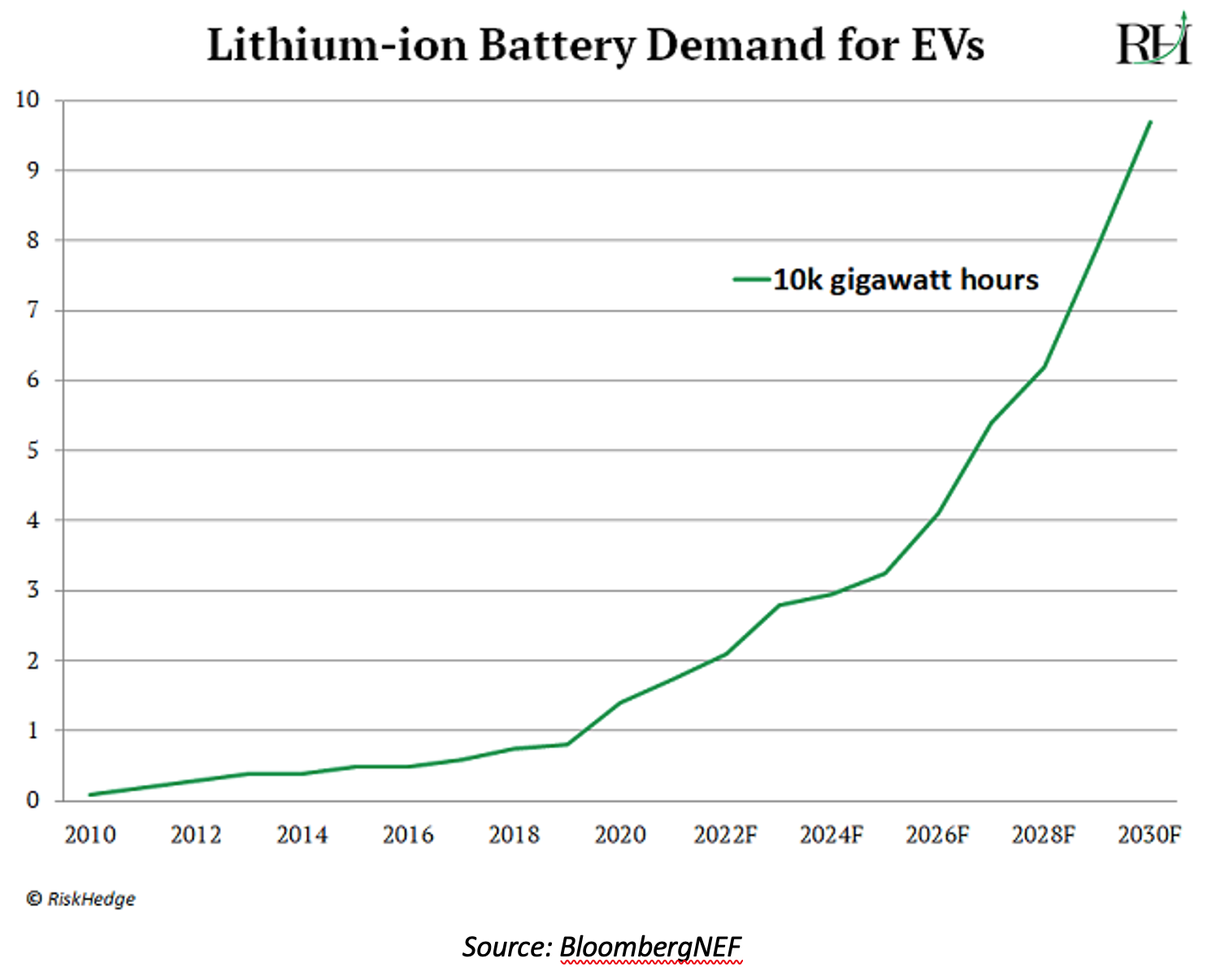 These projections are likely too conservative given Biden’s new plan for electric cars to make up half of all new car sales in just nine years.

Europe recently announced it wants to ban gas guzzlers by 2035 too.

In short, we’re going to need a lot more lithium…

Longtime readers know Albemarle is one of my favorite disruptor stocks. The company controls 25% of the lithium market and owns the purest lithium mines on the planet.

Remember… carmakers like GM, Ford, and Tesla are going to need truckloads of battery-grade lithium over the coming decade. Albemarle will be their prime supplier.

According to top analysis firm Benchmark Mineral Intelligence, lithium demand will outstrip supply by 200,000 tons over the next four years. Lithium prices have already doubled this year, surging to their highest levels since late 2018.

Albemarle is building two new lithium processing plants which will double its output by the end of next year. It’s also ramping up operations at its Nevada mine, the only source of US lithium in production today.

The stock has more than tripled since we added it to the Disruption Investor portfolio back in 2019: 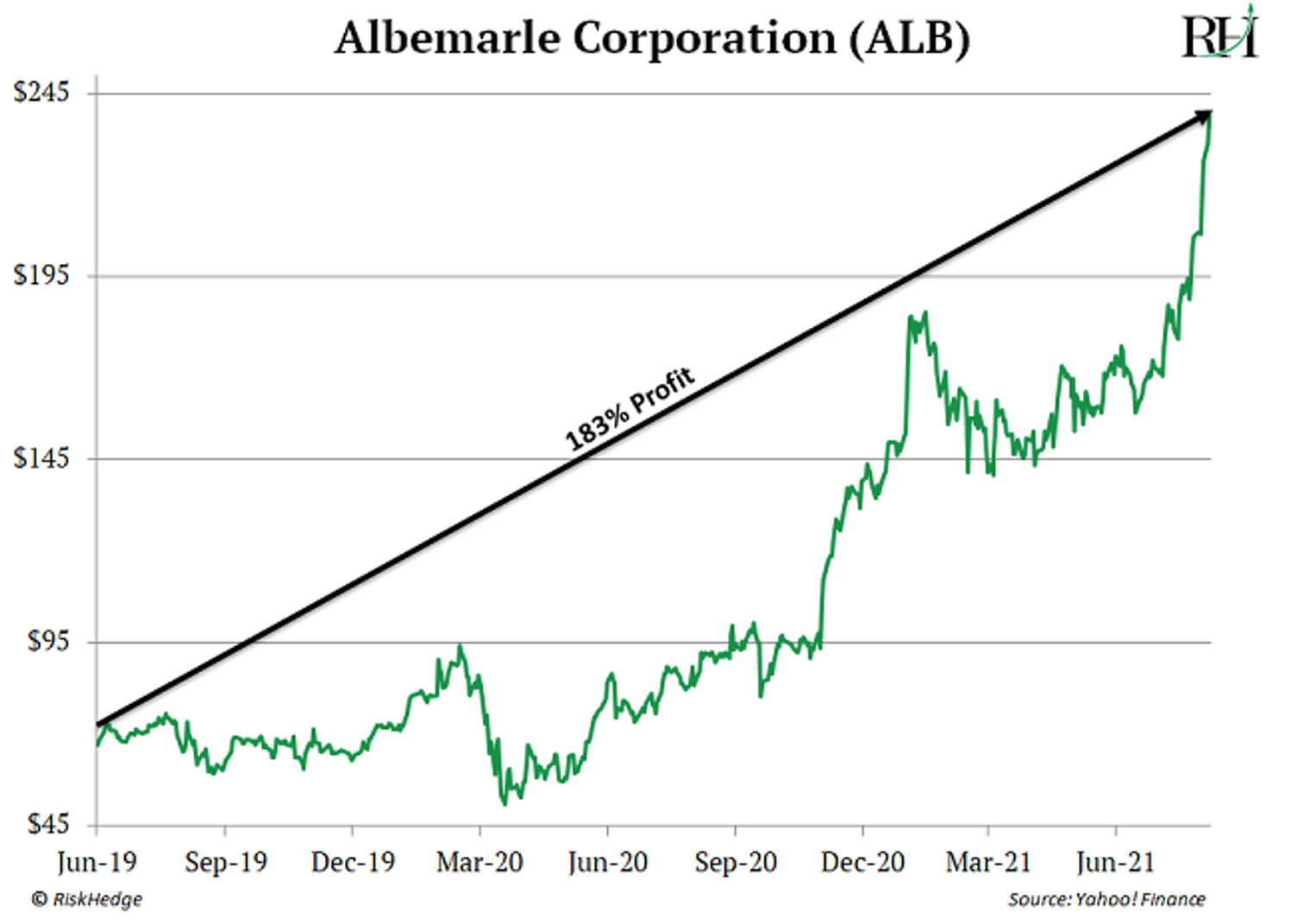 Albemarle practically invented the market for battery-grade lithium. This has allowed it to rapidly grow sales and capture all the upside for itself and shareholders. Investing in great disruptors allows you to sit back and collect profits as they change the world.

Albemarle is the #1 way to profit as EVs take over our roads. As I’ve mentioned before, Tesla makes the best electric cars on the market. But picking a winner in the auto industry is extremely hard.

By owning Albemarle, you don’t have to back a horse in this race. You’ll make money whether Tesla, Ford, or GM comes out on top.