How the Sale of a Sting CD Sparked an Entire Industry

Kohn had just sold a CD to a man in Philadelphia through his clunky website.

The man paid $12.48 plus shipping for a copy of "Ten Summoner’s Tales" by the rock star Sting.

Why was this such a big deal?

That CD was the first item ever sold on the internet.

Today, it’s a colossal $900 billion industry… and America’s online industry is about to hit a major milestone.

Folks look at this big number and assume the profit opportunity has passed them by. I mean… hasn’t online shopping pioneer Amazon (AMZN) already run up 100,000%?

According to Pew Research, 308 million Americans used the internet last year. But did you know that 80% of our spending still happens offline? In other words, almost everyone is online... but most of the money isn’t!

By every measure, only a tiny slice of the economy has shifted onto the internet.

Amazon, Google (GOOG), and Facebook (FB) are three of the world’s largest companies. But internet businesses account for less than 10% of the stock market’s total value.

Tech companies make up an even smaller slice of corporate earnings. My math shows internet disruptors make up just 8% of profits.

Remember, online sales have pretty much gone one way our entire lives… up!

And mark my words: We’re only getting started...

The internet has barely touched the largest sector of American business.

There are 30 million “mom and pop” businesses in the US.

They make up 99.9% of all companies in America. And according to IRS data, firms with less than $100,000 in annual sales raked in a combined $2.2 trillion last year.

Until recently, almost none of this happened online.

A CNBC poll found almost half of small businesses don’t even have a website. According to Gallup, two-thirds of mom-and-pop stores that sell online earn less than 10% of their sales on the internet.

This changed dramatically in 2020. COVID-19 sparked a wave of mom and pop stores shifting online.

Businesses that didn’t even have a rudimentary website were suddenly rushing to set up fully functional internet stores.

Patrick Collison, CEO of digital payments giant Stripe recently said: "More businesses launched on Stripe since the start of 2020 than did in the rest of Stripe's history."

In March, Mark Zuckerberg announced that there are now more than one million active Facebook Shops.

And did you know, Americans are starting their own companies at the fastest rate EVER?

A record 4.4 million new businesses applications were filed last year. Research from the Economic Innovation Group found the bulk of these were online-only businesses.

After years of being offline, the largest sector of American business is setting up shop on the internet.

This will transform the online economy into a multitrillion-dollar market.

Shopify (SHOP) is powering the mom and pop’s online shift

From creating the website… to shipping orders… to processing payments… Shopify is a “one-stop shop” for anyone wanting to sell online. You can get a webstore up and running on the platform in as little as three clicks.

Last year, over 400 million people bought something through a Shopify website!

Shopify has one of the most phenomenal growth stories of all time.

Its sales have soared 30X since 2015. It just reported its 24th consecutive quarter of earnings “beats.” And it’s handed investors 3,500% gains over the past five years. 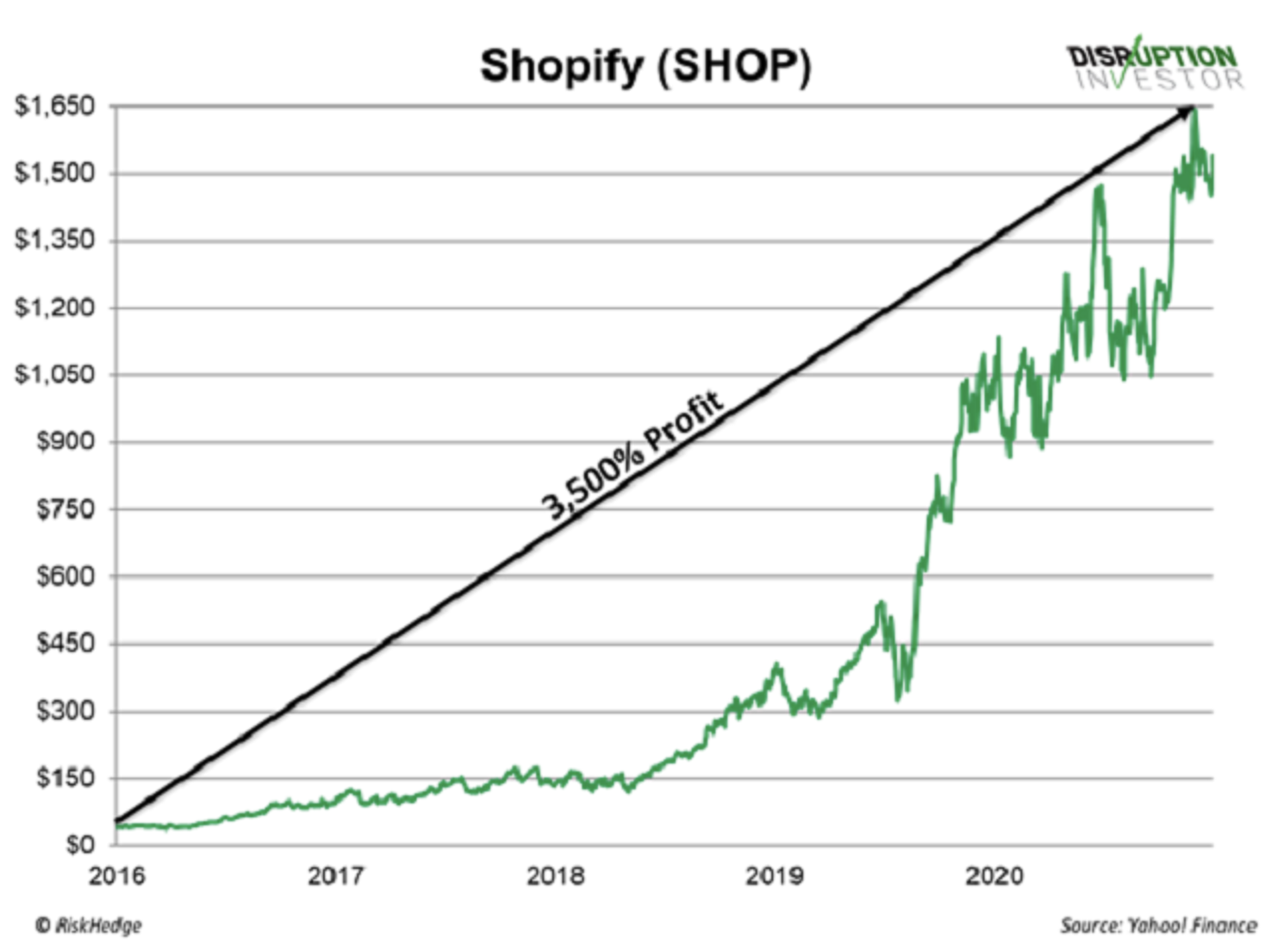 Shopify now manages online stores for over 1.75 million businesses. And these merchants sold a record $40 billion through its platform in the last three months alone.

For perspective, that’s more than Shopify businesses sold in all of 2018.

Shopify is by far the fastest growing internet company in America. And it’s now the world’s sixth-largest retailer—online or offline. It sits just behind DIY superstore Home Depot (HD).

Remember I told you Americans are starting businesses at the fastest rate ever?

In a three-month span earlier this year, more new businesses were launched than at any other time in history.

This is rocket fuel for Shopify.

Shopify data shows the majority of its customers are first-time entrepreneurs. These folks don’t want the “dirty work” of online selling like shipping products… accepting returns… and running marketing campaigns.

Why bother when Shopify will handle everything for $29 a month? That’s why it’s become the go-to solution for America’s new army of online sellers.

Shopify just achieved its first ever billion-dollar quarter, but that’s only the tip of the iceberg.

It estimates there are 68 million small businesses that it doesn’t serve yet. It collects $2,250/year from each merchant, on average. So, Shopify could potentially rake in $153 billion/year. That’s more than tech titans Microsoft and Facebook!

An incredible profit opportunity still lies ahead for us.

Don’t make the mistake of thinking the easy money has already been made.

Winners like Amazon and Shopify can keep on winning for a very long time. And you can make life changing gains by backing these juggernauts.

My research suggests internet shopping is only in the third or fourth inning. Over the next two decades, more than 50% of our spending will shift online.

Disruptors like Shopify have a long runway of growth ahead. I expect the company will continue breaking records, and its stock could potentially 10X over the next decade.

Related: Why You Should Care About a $208,000 Video of LeBron James Dunking