Here’s What You Should Do About Inflation

“What should I do about inflation?”

My Uber driver recently asked me this after I told her what I do for a living.

And she’s not the only one asking me this question.

My mom… brother… friends who’ve never bought a stock in their lives… and many of you who read my essays every week want to know the same thing:

Why are pricing soaring? Should I do anything to prepare?

What should I do with my current investments?

I’ll let you know exactly what to do in today’s RiskHedge Report.

But first, let’s look at why inflation fears have been front and center on most folks’ minds…

You’re paying more for gas at the pump.

Your grocery bill is probably higher than it was a few months ago.

Those new clothes for your kids’ first day of school are more expensive than last year.

Now to be fair, prices for everyday goods and services have been creeping higher for pretty much all of modern history.

So, why is inflation suddenly on everyone’s minds?

The government is finally admitting that inflation is a problem.

The chart below shows the Consumer Price Index (CPI) going back to 1990. This index tracks a basket of everyday goods and services. A rising CPI means that inflation is climbing.

You can see that inflation has exploded recently. In June, it hit its highest level since 2008. 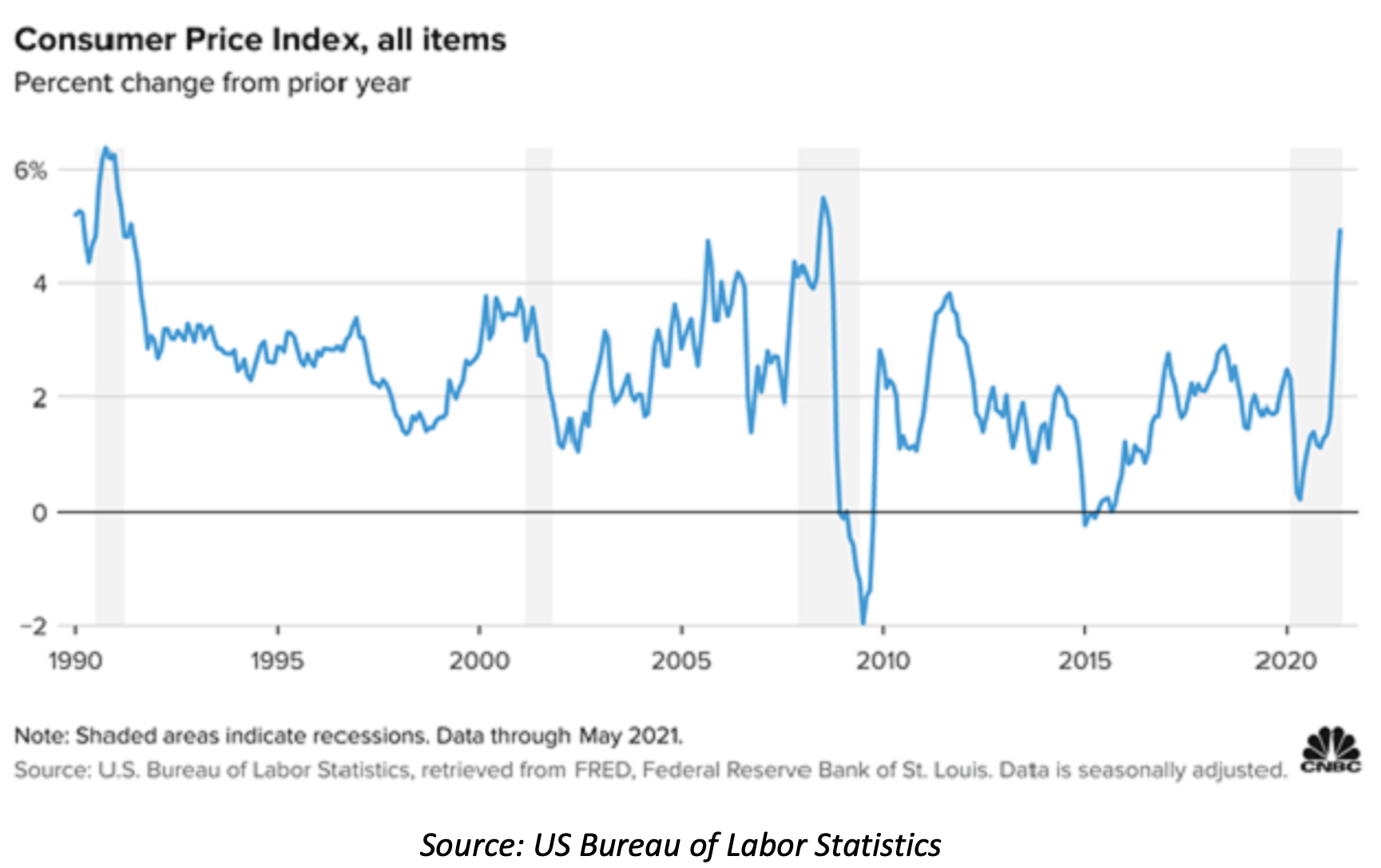 Inflation is now the talk of the investment world…

CNBC, MSNBC, and other mainstream financial media outlets can’t go a day without a feature on it.

It’s important to know that inflation isn’t just a matter of everyday stuff getting more expensive. The inflation rate is one of the most important pieces of data in all of finance. A small tick in the rate can cause billions of dollars to flood out of some investments and into others.

That’s because the inflation rate affects EVERYTHING. It anchors investors’ expectations about the returns they need to generate. When inflation is running at a rock-bottom 1%... investors may be satisfied earning 5% per year.

But when inflation soars to 7%, nobody’s going to be happy earning 5% a year... because they’re losing money!

Inflation recently had its “magazine moment.”

Just look at this cover that Barron’s published for its May 2021 issue. 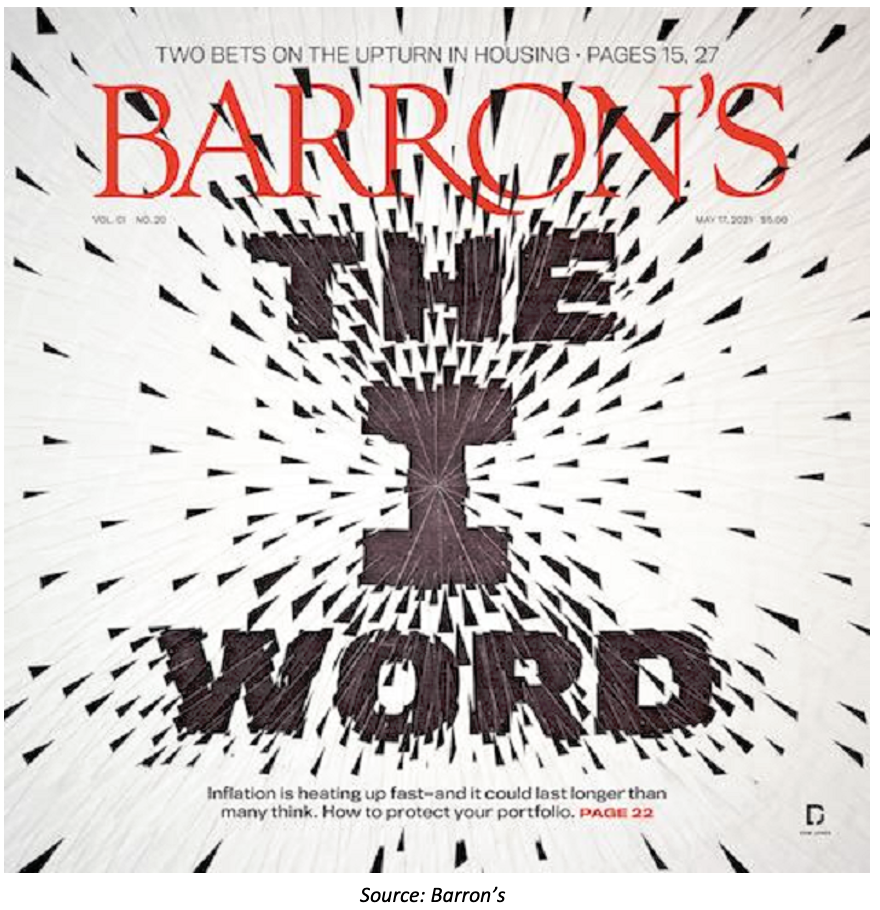 As I explain in this essay, magazine covers are a contrarian indicator…

You see, magazines can be great sources of information.

But the folks who write these publications aren’t world-class investors. They’re journalists.

Most of the time, they write about what’s hot in the markets. That’s how you sell issues and subscriptions.

Because of this, magazine covers can tell us a ton about public sentiment. They can even offer incredible contrarian investing signals…

In this case, everyone is now thinking about inflation. It doesn’t matter if you work on Wall Street or at a bakery.

And that tells me one thing…

The big money from the “inflation trade” has already been made…

One way to see this is by looking at the recent action in commodities prices.

They’re the “inputs” that form the foundation of the economy.

While there are a lot of ways to hide or misstate inflation... commodities prices always tell the truth.

In other words, if there’s real inflation going on... it’ll show up in commodities prices.

Back in May, lumber prices were going berserk. At the time, they were up 278% in just over five months.

But take a look at what’s happening today.

As you can see, lumber is no longer rocketing higher. It’s in free fall...

Since peaking in May, the price of lumber has crashed 63%. 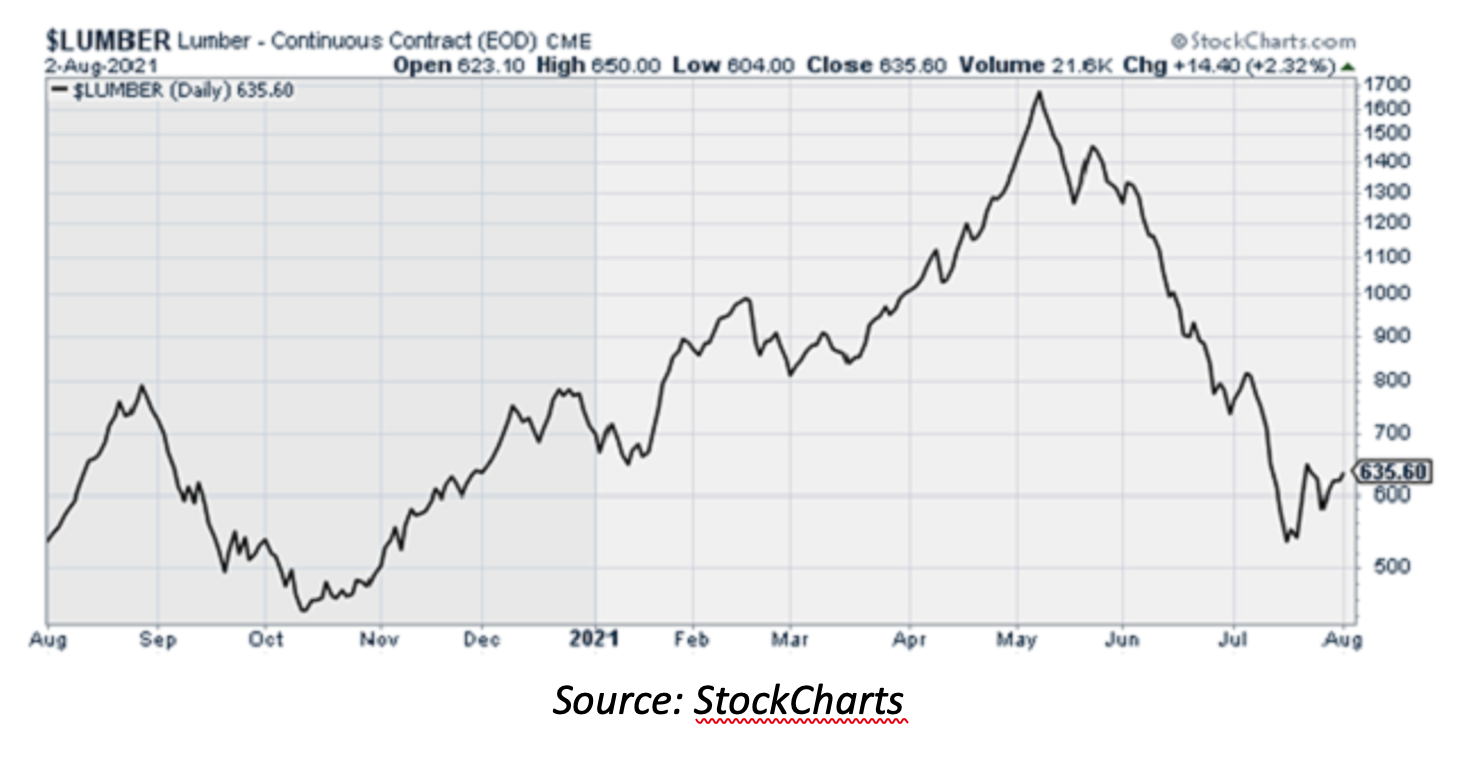 And that’s just one example.

Platinum has fallen 16% since February. Silver is down on the year after a short-lived rally, while gold—many investors’ “inflation hedge”—has been declining since last August.

At the same time, bonds have surged in recent weeks.

This chart shows the performance of the iShares 20+ Year Treasury Bond ETF (TLT), which invests in government bonds. You can see that TLT has rallied 13% since March. 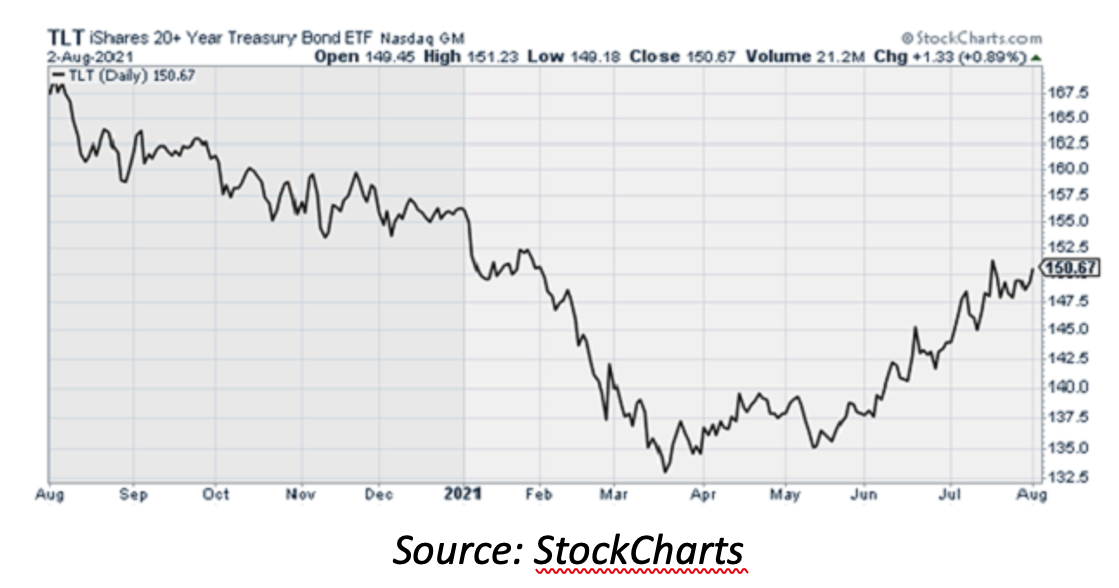 Bond prices typically fall when inflation is rising. That’s because most bonds pay a fixed rate of interest.

If you own a bond that pays 3% and inflation is just 1%, you’re making money. If inflation surges to 5%, you’re suddenly losing money. That, in a nutshell, is why investors dump bonds when they expect inflation.

But as you can see, bonds have been marching higher since early spring...

In short, the market “priced in” inflation long before the government released its official figures.

Remember: Markets look to the future.

That’s why you should never make investment decisions based solely on economic data or magazine articles. There’s a great chance that the big money has already been made.

And this doesn’t just apply to inflation.

We’ve seen this play out in cannabis stocks, crypto miners, and uranium miners in the past.

Thanks to the Federal Reserve, prices for everyday goods will likely continue increasing.

But the time to bet on inflation isn’t when it’s being plastered all over magazine covers. It’s when no one else is talking about it.

So, here’s what I recommend if you’re concerned about inflation…

Hang on to the stocks you already own.

Owning stocks is a good way to protect your wealth when inflation is eating away at your purchasing power.

See for yourself. This chart shows the performance of the S&P 500 alongside “M2 Money Supply,” which measures the amount of money in circulation. 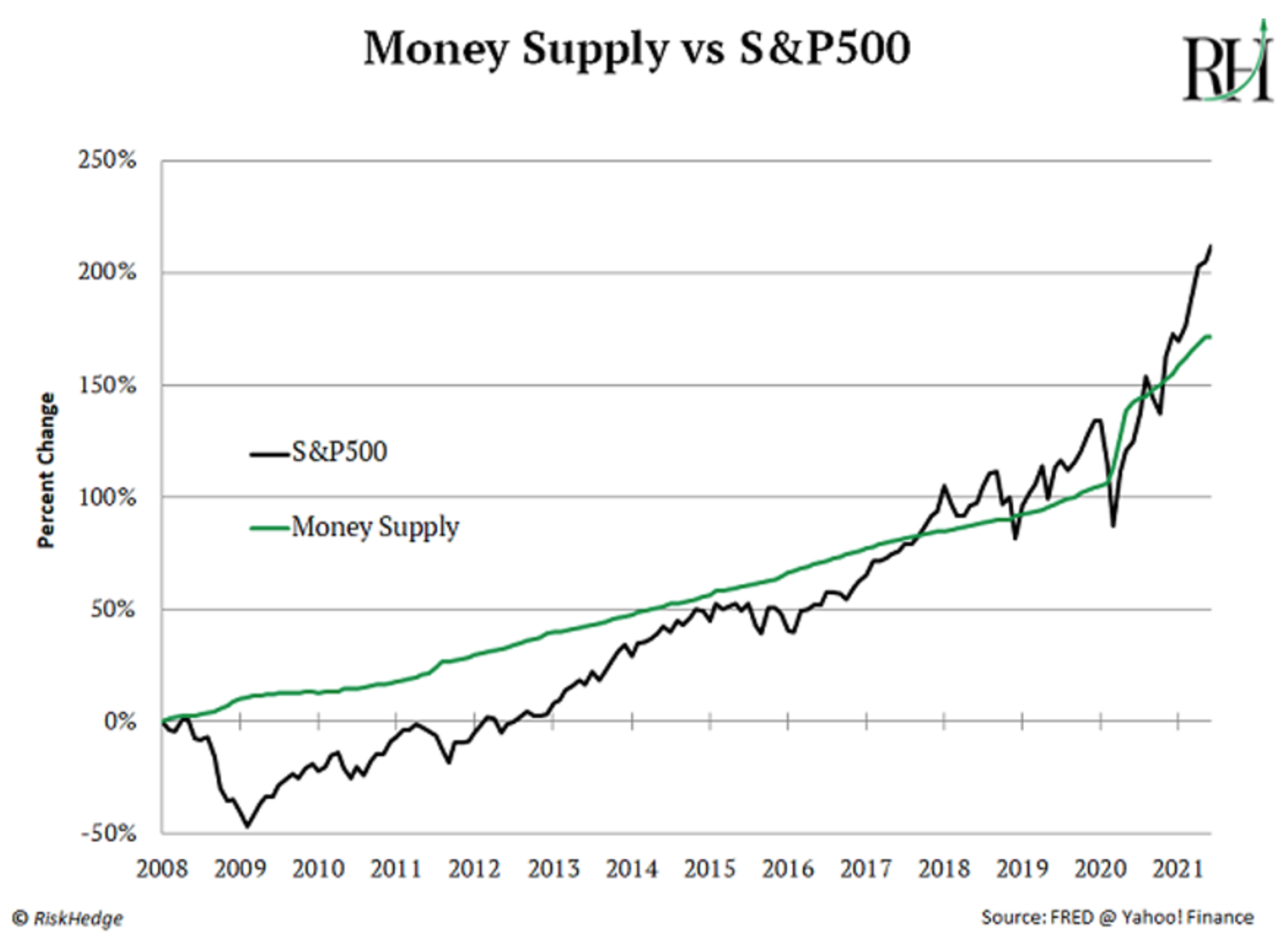 As you can see, the money supply has exploded since the last global financial crisis… thanks to a surge in money printing by the Federal Reserve.

US stocks have climbed 212% over the same period… making them an excellent way to preserve and grow wealth.

At the same time, the S&P GSCI Commodity Index—which tracks the performance of hard assets like gold—has climbed just 58% since 2009. 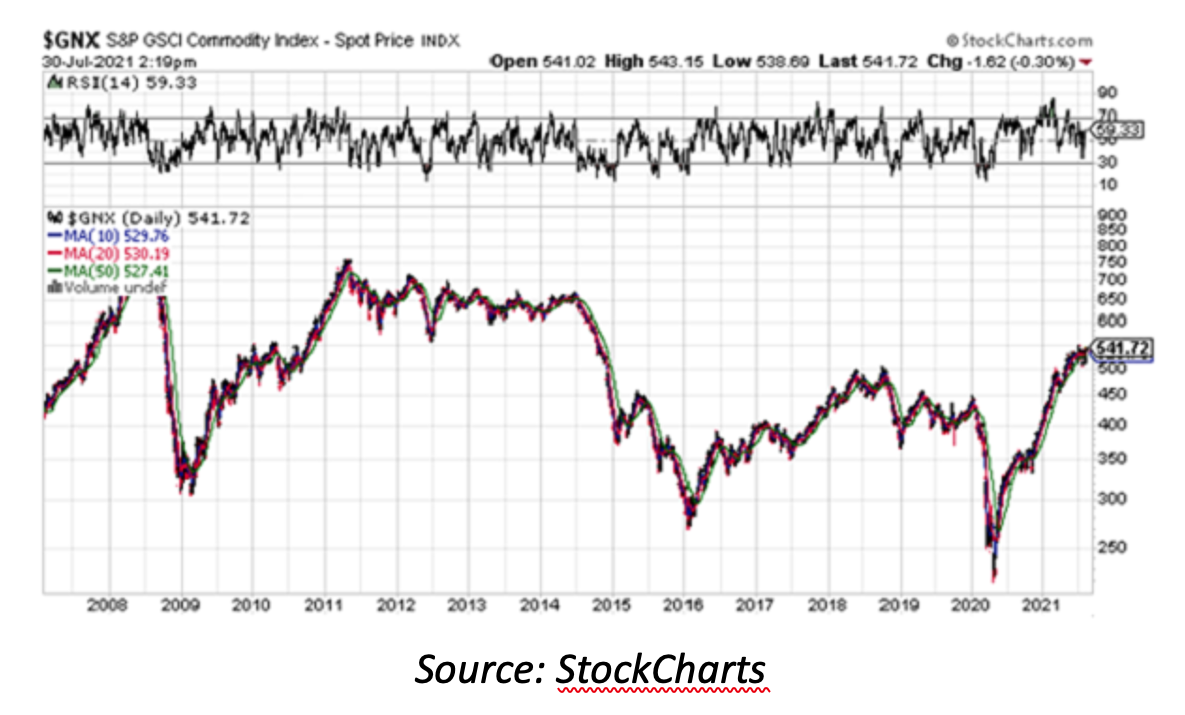 In other words, stocks have massively outperformed traditional inflation hedges over the past decade.

Keep this in mind the next time someone suggests you make a big bet on inflation.