A Bigger Investing Opportunity Than TikTok

Imagine you could turn back the clock and invest in one of today’s “unicorns.”

Which company would you back?

For me, it’s a no-brainer, and I’ll explain why in a minute.

But I should first explain something.

Unicorns are private companies worth more than $1 billion.

They’re called unicorns because they used to be rare. But there are now nearly 800, according to CB Insights.

Unicorns don’t trade on the stock market yet.

To invest in them, you need to be a venture capitalist (VC)… or have deep pockets and connections.

In other words, unicorns are off limits to everyday investors…

But that hasn’t stopped them from skyrocketing in value.

It’s currently valued at $74 billion, despite being valued at less than $1 billion not even a decade ago.

In 2014, the Ireland-based payments giant was worth less than $1 billion. Today, Stripe is valued at $95 billion.

Either of these companies would be acceptable answers. But there’s been an even bigger winner in unicorn land.

Ever heard of TikTok?

The platform is used by people in 150 countries. All told, TikTok has more than 1 billion users… despite not even being five years old.

If you have a teenage son or daughter, there’s a good chance you’ve seen them singing and dancing around the house because of it.

Thanks to this explosive growth, ByteDance—TikTok’s parent company—is now worth $140 billion after being valued at less than $1 billion not even four years ago!

Still, most people wouldn’t have invested in TikTok, even if they’d had a chance…

And many investors are quick to dismiss companies like TikTok because they’d prefer to “invest in what they know.”

They simply don’t “get” technologies used by kids… and write them off as a fad.

But that’s one of the worst mistakes you can make as an investor.

I’m talking about a brand-new megatrend: one more than half of all US children are driving today. In short, the “kids” are proving that this is, hands down, the next massive moneymaking opportunity. And we have a chance to get in on the ground floor today.

I’ll explain how in a minute. First, let’s take a look at arguably the most overlooked investing strategy.

Pay attention to what your children are interested in…

After all, most kids could care less about investing. They’re too young.

But young people are almost always the first to adopt new technologies.

Video games are a perfect example of this.

Before video games took off in the ‘70s, they started with kids playing Pong in their parents’ basements.

Later, it was children who spent their allowance and afternoons at the local arcade.

Of course, the industry has grown leaps and bounds over the years… And those who understood what was happening made out like bandits. 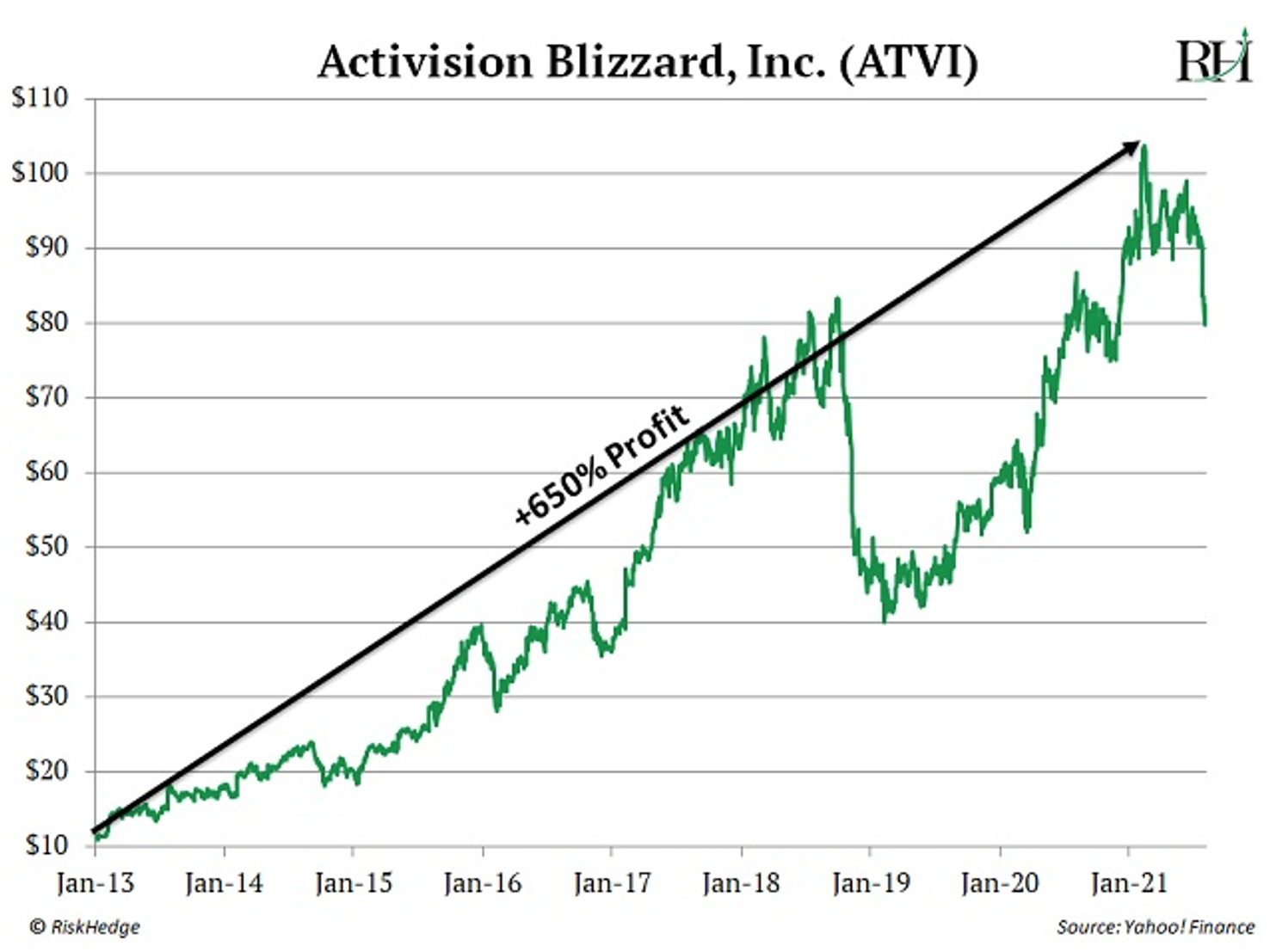 In other words, betting on video games when most investors saw it as a waste of time could have been one of the best decisions of your life.

We also saw the same thing play out with social media…

As I’m sure you know, Mark Zuckerberg created Facebook in his Harvard dorm room.

And it was originally for college students. You even needed a college email address to create an account. Later, it expanded to high school students.

Of course, Facebook is no longer just for kids. It’s used by nearly 3 billion people worldwide. Not only that… Today, the average Facebook user in the US is over 40 years old.

But Facebook was still widely seen as a platform for young people when it IPO’d in 2012.

This led many investors to avoid the stock… much to their regret.

Facebook has rallied 761% since it went public. It’s now one of the most dominant companies on the planet.

More recently, we saw the same thing play out with Snap, Inc. (SNAP).

Snap operates the social media platform Snapchat. Like TikTok, Snap is widely popular with younger crowds. In fact, 9 out of 10 young people use Snapchat today.

That’s why I encouraged RiskHedge readers to buy Snap stock in January 2020. 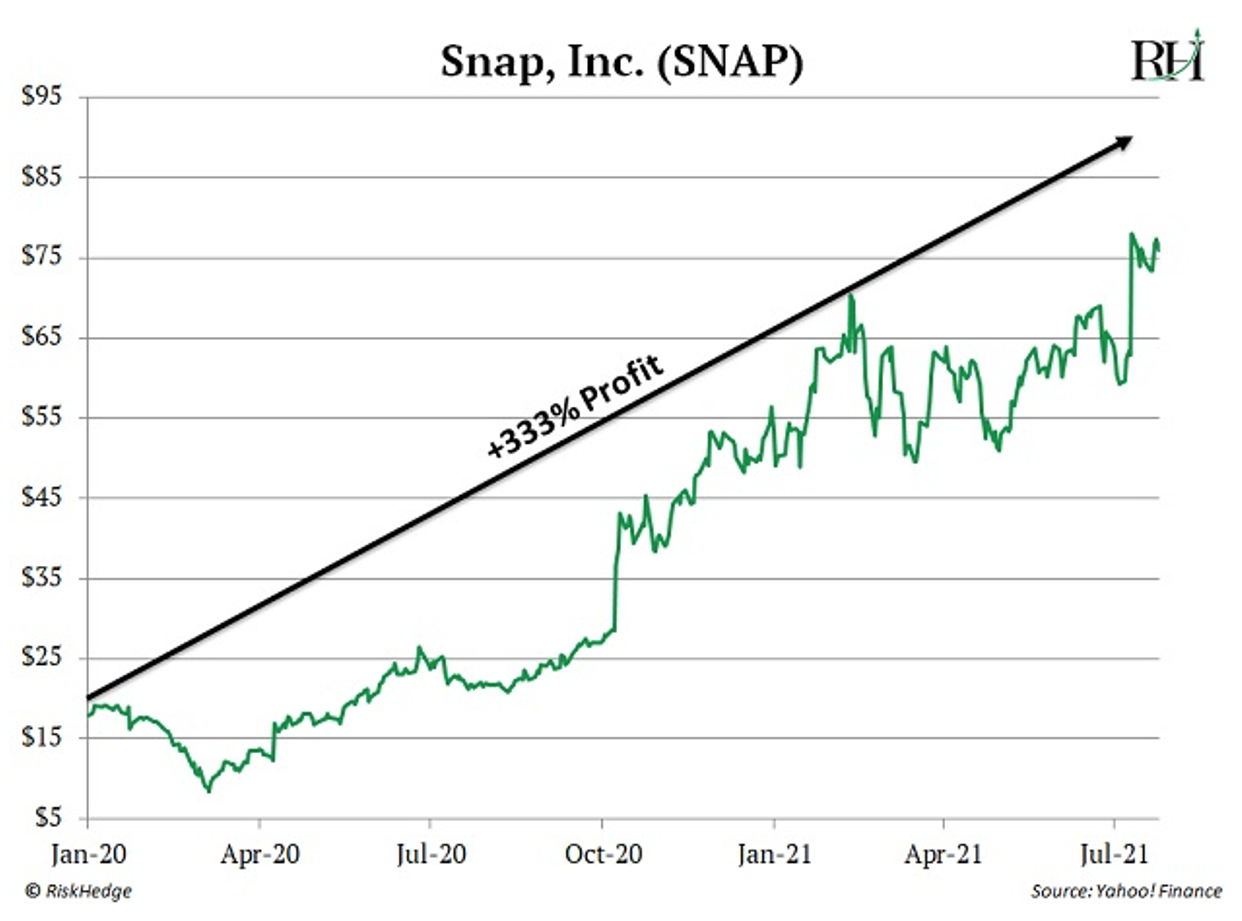 I’m telling you all this because we now can invest in another breakthrough industry.

Once again, this is an industry already wildly popular with kids.

I’m talking about the metaverse…

The metaverse is a new, 3D, immersive internet. A virtual world where you, through an avatar, can socialize with other people, work, play, create, and basically exist. Much of what takes place on the internet today could soon take place inside the metaverse.

Nate Nanzer, Fortnite’s head of global partnerships, says he can envision the metaverse becoming a regular tour stop for bands.

And yet, the metaverse still isn’t on most investors’ radars yet. But it has the potential to become the most dominant megatrend of this decade.

“In the coming years, I expect people will transition from seeing us primarily as a social media company to seeing us as a metaverse company.”

Today, more than half of all American children are already playing on the metaverse!

Microsoft bought digital sandbox platform Minecraft for $2.5 billion in 2014. Minecraft usage has soared 49% over the past year.

Tim Berners-Lee, the inventor of the World Wide Web, is also insanely bullish on the metaverse. In fact, Berners-Lee recently said the coming “cohort of young people who realize that the world does not have to be the way it is.” In other words, kids will once again shape the internet.

But that doesn’t mean everyday investors still can’t cash in on this megatrend.

You could bet on the metaverse by buying The Roundhill Ball Metaverse ETF (META). But you should understand something about this fund.

It largely invests in tech giants like Nvidia (NVDA), Facebook (FB), and Google (GOOG). These companies will no doubt play huge roles in the development of the metaverse.

But they’re far from pure plays. So, I suggest focusing on smaller, lesser-known metaverse stocks if you want to make the most of this incredible opportunity.

Related: I Stumbled Across a Massive Investing Opportunity in a Parking Lot