In January, a group of traders bid up GameStop (GME) shares from $20 to $483. It might have gone even higher if brokers didn't scramble to impose trading limits on this beleaguered video game retailer.

Meanwhile, the pool of buyers grew in size in just a matter of hours. And they quickly banded together to buy AMC Entertainment (AMC), silver stocks and even some biotechs.

This wild action led to broker outages and even a call for the CEO of online brokerage Robinhood to testify before Congress.

The Rise of the GameStop Populists

Most people buy stocks because they see them as solid businesses with upside for shareholders.

These GameStop traders had an additional motive. They targeted stocks that Wall Street had huge bets against because of their lack of promise.

These investors, meanwhile, were encouraged by the addition of former pet food e-commerce CEO Ryan Cohen to GameStop’s board. If Cohen could figure out how to sell pet food online, they reasoned, then why not video games?

Time will tell whether GameStop continues losing business to online providers or if it chooses to disrupt itself like Netflix (NFLX) did in 2007 when it transformed into a streaming sensation.

Why Did Redditors Pick Now to Strike?

Before last week’s fireworks, GameStop was the most shorted stock in the market. You can measure this by looking at a metric called “short interest as a percentage of float.”

Right now, GameStop has a short interest as a percentage of float of 113%.

That means there are more shares sold short than total shares issued by GameStop!

This dynamic, coupled with an improving outlook, made GameStop the perfect short squeeze target.

Short squeezes happen when lots of investors—or a few with a lot of money at stake—are short a stock. That is, they've borrowed shares with the expectation that they will buy them back at a lower price.

If a lot of other investors start to buy the stock and drive up its price, the "shorts" (often large hedge funds) are forced to buy back the stock at the current market price. In this case, the stock was a lot higher, which meant taking a huge loss.

The long-short hedge fund has borne the brunt of GameStop Populism. The formerly five-star fund run by the protégé of Steve Cohen lost more than 50% of its value in January 2021.

In total, Melvin Capital and others have lost a total of $19 billion shorting GameStop. 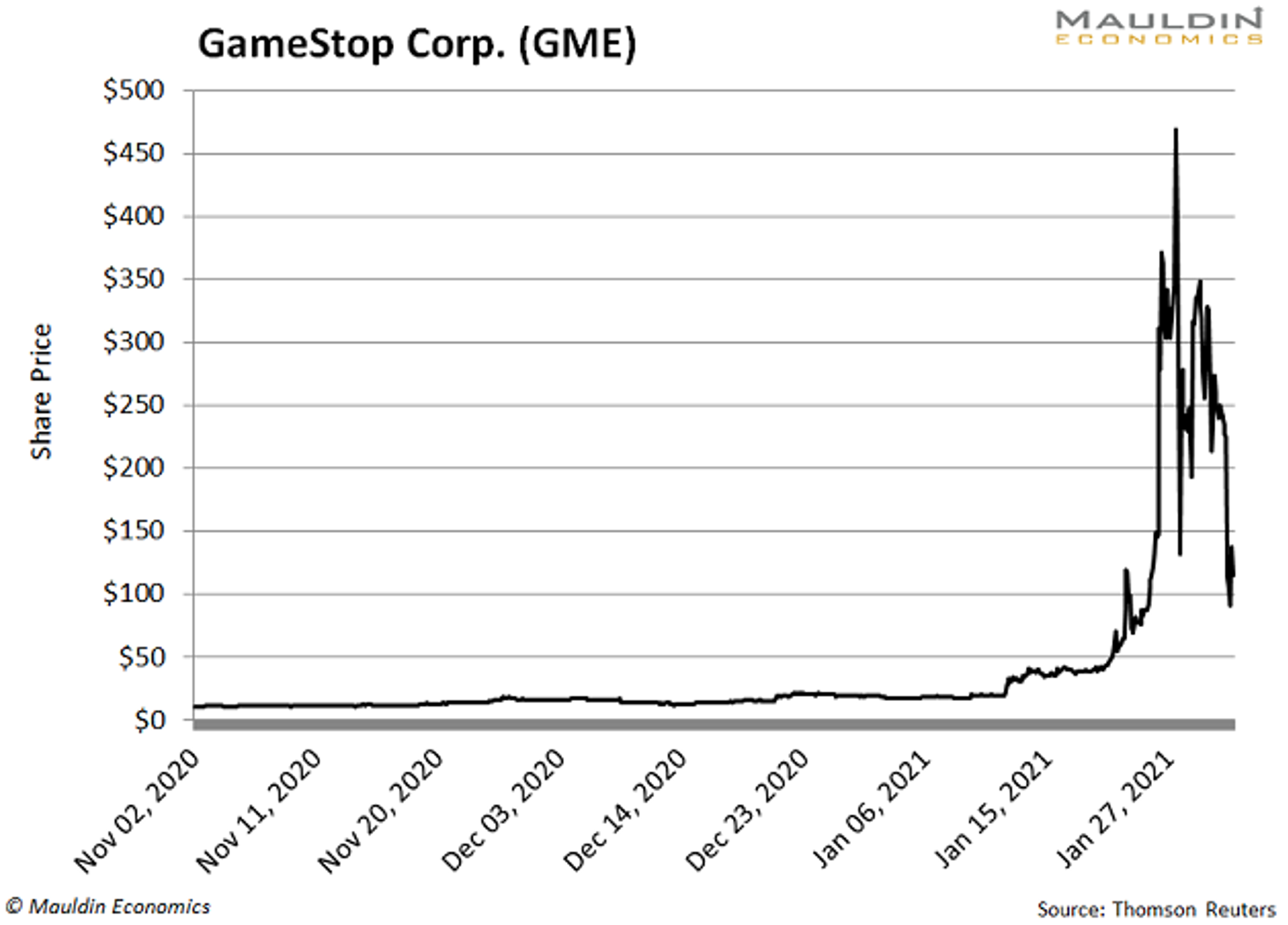 Everyone loves a good financial fable where the little guy wins—even when Wall Street tries its best to stop him.

And some people did win. Like the Missouri dad whose $4,500 investment turned into a paper gain of $1 million. I hope he took profits before GME crashed back down to earth almost as fast as it skyrocketed.

The best story I heard was about a 10-year-old boy from San Antonio who cashed out when he saw his stake soar from $60 to $3,200 in "short" order. The boy and his mom plan to put $2,200 in his bank account and reinvest the rest.

Here's What They Should Buy Next

There are three key factors when it comes to profiting from GameStop Populism.

One company that fits this mold is Rocket Companies (RKT).

Rocket is a pioneer in the mortgage lending business, holding a 10% market share. But since its 2020 IPO, this app-based lender's stock has moved sideways. At the same time, short interest as a percentage of float has risen to 36%. 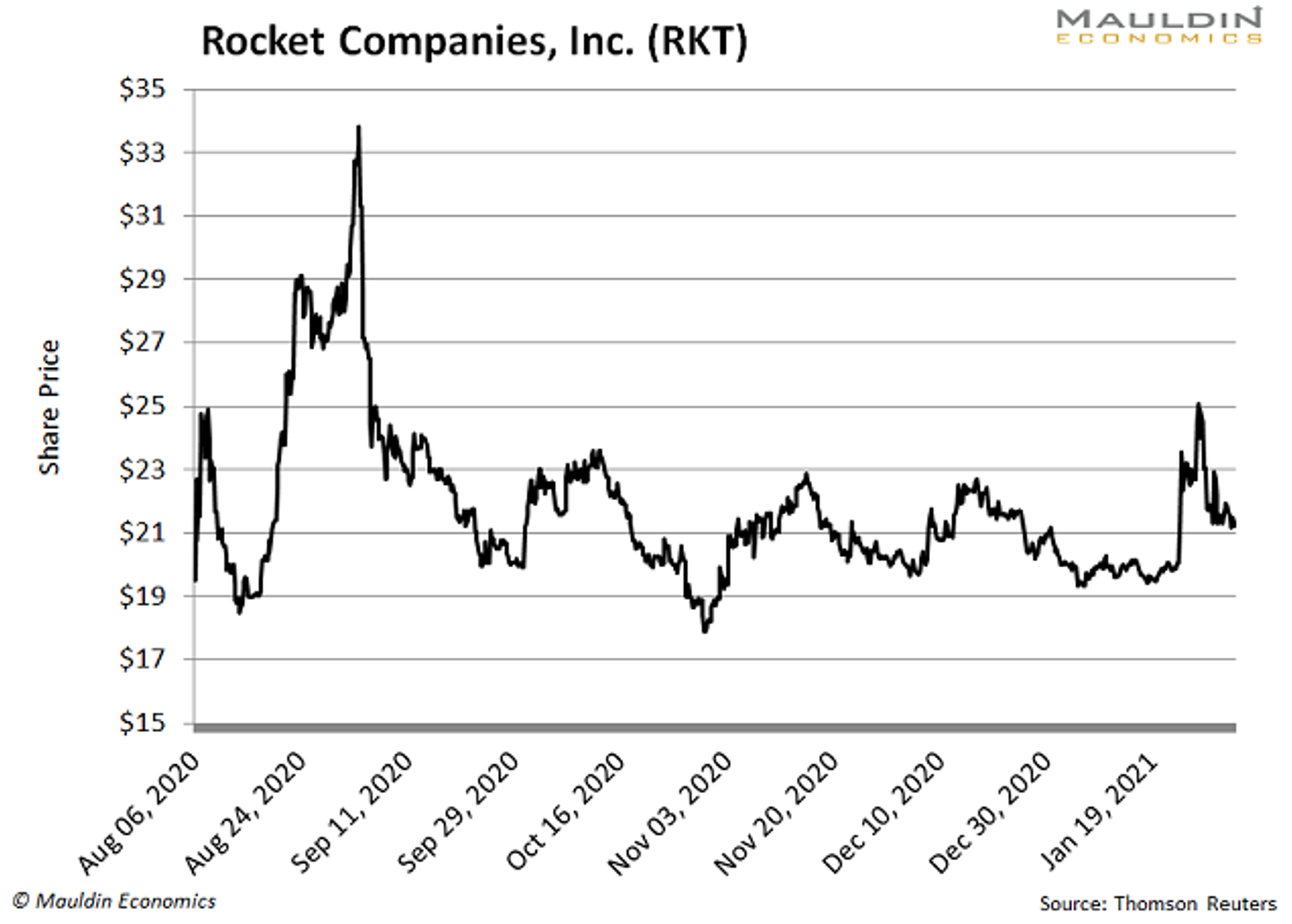 With triple-digit sales growth and a large total addressable market in the mortgage industry, RKT’s outlook is solid. And if shares start to rise rapidly, we could see yet another short squeeze unfold.

By improving price transparency and finding pharmacies with the best prices, GDRX is attempting to disrupt the legacy healthcare model.

Sales grew more than 50% over the last three years. And with a total addressable market of $300 billion, the company has a long runway for growth.

Add given that GDRX has a short interest as a percentage of float of 31%, the company could be the next beneficiary of GameStop populism.

Another stock that could see a nice pop is PetMed Express (PETS).

PETS is a leading, nationwide pet pharmacy based in Delray Beach, Fla. It markets over 3,000 prescription and non-prescription medications for dogs and cats directly to consumers.

While Rocket and GoodRx are in higher-growth markets, PETS offers an income advantage with its hefty 3.8% dividend yield.

PETS also has a low payout ratio of 73%, which tells me the dividend yield is safe. The company also has a short interest as a percentage of float of 32.5%, meaning it could benefit from a massive short squeeze.

Even if the Redditors never make another coordinated trade, these stocks all have plenty of reasons to go higher in short order.

My brand-new special report tells you everything about profiting from “sin stocks” (gambling, tobacco, and alcohol). These stocks are much safer and do twice as well as other stocks simply because most investors try to avoid them. Claim your free copy.