Is the Worst for Stocks Over?

Is the worst of what the last few weeks brought over? February started off with so much promise, only to be ruined by surging bond yields.

The way that bond yields have popped has weighed heavily on growth stocks. Outside of seeing a minor comeback on Friday (Feb. 26), the Nasdaq dropped almost 7% between February 12 and Friday’s (Feb. 26) close.

Other indices didn’t fare much better either.

The spike bond yields, however, in my view, are nothing more than a catalyst for stocks to cool off and an indicator of some medium to long-term concerns. But calling them a structural threat is a bit of an overstatement.

Rising bond yields are a blessing and a curse. On the one hand, bond investors see the economy reopening and heating up. On the other hand, with the Fed expected to let the GDP heat up without hiking rates, inflation may return.

I don’t care what Chairman Powell says about inflation targets this and that. He can’t expect to keep rates this low, buy bonds, permit money to be printed without a care, and have the economy not overheat.

He may not have a choice but to hike rates sooner than expected. If not this year, then in 2022. I no longer buy all that talk about keeping rates at 0% through 2023. It just can’t happen if bond yields keep popping like this.

So was the second half of February the start of the correction that I’ve been calling for? Or is this “downturn” already over?

Time will tell. While I still do not foresee a crash like we saw last March and feel that the wheels are in motion for a healthy 2021, I still maintain that some correction before the end of this month could happen.

Corrections are also healthy and normal market behavior, and we are long overdue for one. Only twice in the last 38 years have we had years WITHOUT a correction (1995 and 2017), and we haven’t seen one in almost a year.

Pay attention to several things this week. The PMI composite, jobs data, and consumer credit levels will be announced this week.

The downturn we experienced to close out February could be the start of a short-term correction- or it may be a brief slowdown. A further downturn by the end of the month is very possible, but I don’t think that a decline above ~20%, leading to a bear market, will happen. 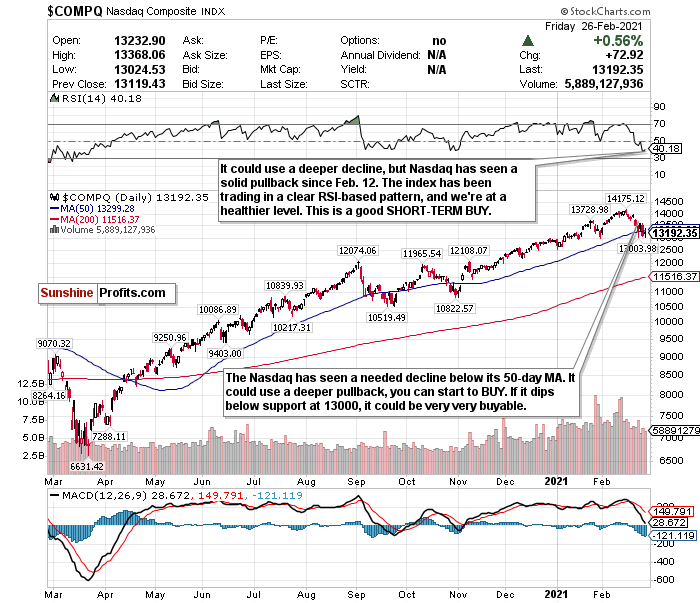 The Nasdaq’s downturn was so overdue. Even though more pain could be on the horizon, I like the Nasdaq at this level for some buying opportunities.

If more losses come and the tech-heavy index dips below support at 13000, then it could be an even better buying opportunity. It can’t hurt to start nibbling now, though. If you waited for that perfect moment to start buying a year ago when it looked like the world was ending, you wouldn’t have gained as much as you could have.

Plus, if Cathie Wood, the guru of the ARK ETFs that have continuously outperformed, did a lot of buying the last two weeks, it’s safe to say she knows a thing or two about tech stocks and when to initiate positions. Bloomberg News ’ editor-in-chief emeritus Matthew A. Winkler wouldn’t have just named anyone the best stock picker of 2020.

Before February 12, I would always discuss the Nasdaq’s RSI and recommend watching out if it exceeds 70.

Now? As tracked by the Invesco QQQ ETF , the Nasdaq has plummeted almost 7% since February 12 and is closer to oversold than overbought. !

While rising bond yields are concerning for high-flying tech stocks, I, along with much of the investing world, was somewhat comforted by Chairman Powell’s testimony last week (even if I don’t totally buy into it). Inflation and rate hikes are definitely a long-term concern, but for now, if their inflation target isn’t met, who’s to fight the Fed?

Outside of the Russell 2000, the Nasdaq has been consistently the most overheated index. But after its recent slowdown, I feel more confident in the Nasdaq as a SHORT-TERM BUY.

The RSI is king for the Nasdaq . Its RSI is now around 40.

I follow the RSI for the Nasdaq religiously because the index is merely trading in a precise pattern.

In the past few months, when the Nasdaq has exceeded an overbought 70 RSI, it has consistently sold off.

I like that the Nasdaq is almost at its support level of 13000, and especially that it’s below its 50-day moving average now.

I also remain bullish on tech, especially for sub-sectors such as cloud computing, e-commerce, and fintech.

Because of the Nasdaq’s precise trading pattern and its recent decline, I am making this a SHORT-TERM BUY. But follow the RSI literally.

For more of my thoughts on the market, such as the streaky S&P, inflation, and emerging market opportunities, sign up for my premium analysis today.